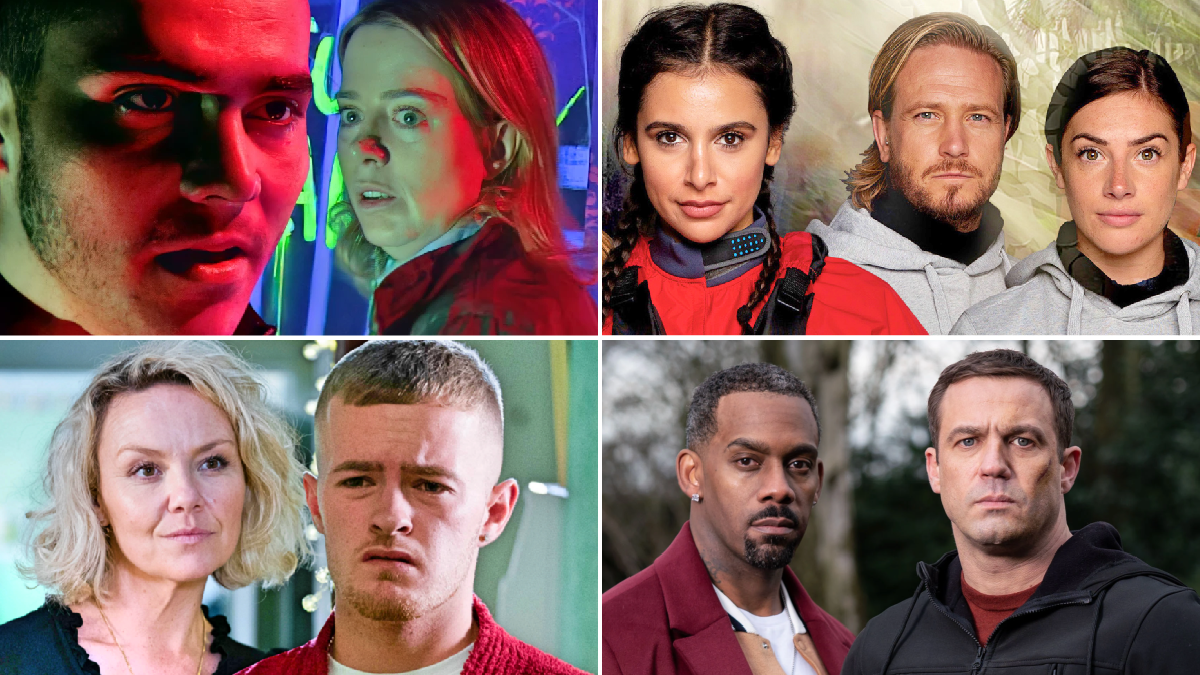 If you like your drama with a helping of death and destruction, then ITV is the place to be, as Coronation Street and Emmerdale are set to air their most ambitious weeks EVER!

The broadcaster’s signature Super Soap Week is back, following a hiatus last year due to the Covid-19 pandemic, and therefore you can expect disaster and murder aplenty.

As real and metaphorical storm clouds gather over the famous cobbles, the residents of Coronation Street make plans for Halloween parties and holidays, oblivious to the tragedies waiting around the corner.

Revenge plots, explosions and sinkholes collide in what is expected to be one of the serial drama’s biggest weeks ever.

Emmerdale, similarly, is not holding back, as Meena Jutla claims her next victim amid the survival challenge, in epic scenes featuring FOUR stunts and a huge waterfall sequence.

If that’s not enough horror to quench your thirst, Hollyoaks is right up your street too, as longtime villain Warren Fox decides to seek hellish revenge on Felix Westwood.

EastEnders, while offering a quieter week than its rivals, sees a number of interesting developments for Gray Atkins and Janine Butcher – some that will change EVERYTHING.

If you’re simply dying to know more, we’ve got you covered, with a hand-picked selection of the biggest 25 moments that next week’s soaps have to offer.

1. Debbie puts the finishing touches to the House of Horrors attraction behind the street. Residents excitedly choose their Halloween costumes and no one spots the ominous shifting of earth around the Platt’s sinkhole.

2. Abi watches a video of Corey packing for Germany and sets off with a gun in her possession – determined to have her revenge. She finds him at the Horror-nation Street event, and follows him. A confrontation ensues, the storm results in both Abi and Corey falling into the sewers below, and – with the water rising around them – Corey takes hold of the gun.

3. Dev, Aadi and Asha leave for their holiday, but as the thunder crashes overhead they find themselves lost on a country road. Heading for the same country lane is a prison van rushing injured drug dealer Harvey to hospital. After tragedy strikes, Dev is forced to make a heartbreaking decision between his kids. Believing Asha to be in more danger he drags her away from the car.

4. Kevin arrives at the crash site but is attacked by Harvey who steals the pick up truck. Harvey makes it back to the street, hoping to find Leanne. Leanne runs for her life, but will she escape? Or will murderous Harvey get his revenge?

5. Johnny decides it’s time to leave the cobbles, and thus he resolves to stay with Kate in Bali. Jenny is stunned to learn of her ex’s impending departure, but that’s soon the least of their worries, as both end up trapped in the sewers below! As the water continues to rise, Johnny and Jenny scream for help clinging to the ladder.

6. Leo tells David and Shona that he suspects the horrific events are linked to the sinkhole in their garden and thus they need to evacuate the area.

7. Roy is questioned by the police.

8. Gray’s money issues continue, but that’s soon the least of his worries, as he later gets a call that leaves him devastated: his dad has died. He tells Whitney he didn’t expect to be so cut up, and after going through some of his dad’s belongings, he kisses Whitney.

9. Liam ignores a call from Cindy as Peter arrives to say his sister’s also been in touch with him wanting money – Janine covers for Liam. Over at The Arches, Ben leaves Liam on his own and he’s struck with an idea. Janine later spots Jay and asks him for a job at the car lot but he’s not having any of her nice act and refuses. She then fills Liam in on her plan, and it’s clear Janine is back to her old ways!

10. Liam puts the plan in motion and talks up Janine’s selling skills to Jay, who takes the bait. Janine, meanwhile, ups the ante with Billy, but Billy gives her an ultimatum: quit the plan, or he’ll tell Jay everything!

11. Kat confronts Ash, who reveals what Harvey said, leaving her floored. Kat finds Harvey in The Vic and promptly sacks him. Harvey tells Dana he’s been fired as she reminds him that he needs to be careful about things he says, persuading him to talk to Ash. Feeling guilty about lying to him about Bobby, they agree to come clean.

12. Harvey clears the air with Ash and she softens to his apology but Peter is outraged and chucks him out.

13. Aaron, Harvey’s son, arrives in the Square and asks for directions. Harvey is delighted to see his son, but Dana doesn’t share his enthusiasm. Aaron gives Harvey some bad advice and rudely snaps at Dana for not taking their dad’s side, leaving her humiliated.

14. Tiffany hits it off with Aaron, who explains that he’s planning to be in Walford for a bit. Tiff, however, tells Liam it’s too soon for her to be dating after Keegan.

15. The survival challenge begins, and the survivalists jump into their rafts, before setting off down the river. Billy and Ben try to rally their respective team members. It seems to be going rather well, but the day soon takes a horrible turn and many are left fighting for their lives in the menacing waters.

16. Meena, on a mission to kill Victoria, damages her harness. However, Manpreet takes Victoria’s harness, and Meena watches on in fear.

17. Charity and Mackenzie separate themselves from their respective groups in order to cheat. Things take a turn, however, as Mack hears a loud scream coming from the pond, and – as he approaches it – he sees large ripples moving across the water. Has Charity vanished beneath the surface?

18. Priya and Ellis head off for some cheeky fun in the woods. Ellis shares a moment with Priya afterwards, before she heads-off to drop off the survival challenge prize at the maze.

19. Marlon and Paddy’s frustrations with one another boil to the surface, and they soon find themselves lost in the woods together.

20. There are a number of twists and turns in store for viewers during the week in question, but one thing is for certain: it will end in tragedy for at least one person as Meena’s reign of terror takes hold.

21. The day of Blackpool Apalooza arrives, and Maxine is soon furious with her mum, who continues to bully Leah, branding her a ‘waste of space’. Trish’s bullying inspires Maxine, as she throws herself into coaching Leah in the hopes of winning Blackpool Apalooza! Leah, however, is worried about going against Trish’s plans, as the big day arrives. But will she stick to Trish’s strict routine? Or will she perform the new moves Maxine has taught her?

22. Martine prepares for her operation, but Felix is nowhere to be found. Felix heads off to be there for Martine when she wakes up, but Warren decides to seek murderous revenge. The Deverauxs are stunned when they receive a worrying phone call from Felix, who subsequently disappears.

23. Tony sets about moving into The Dog with wife Diane, who is feeling anxious about the move. But they get quite the shock when they realise that the McQueens have no idea that The Dog is under new management – nor do they know that they’ve been fired and evicted! Nana is livid, and she wastes little time in confronting Fergus, and Tony accompanies her!

24. Grace struggles to keep a secret after overhearing a damning conversation.

25. Misbah claims to be happy about Shaq’s decision to pursue a relationship with Ali, but Sami’s not sure that she’s being truthful. Misbah starts to rant about Ali’s lack of care for anyone, and Sami witnesses her outburst – and confronts her about why Ali’s bothering her so much.