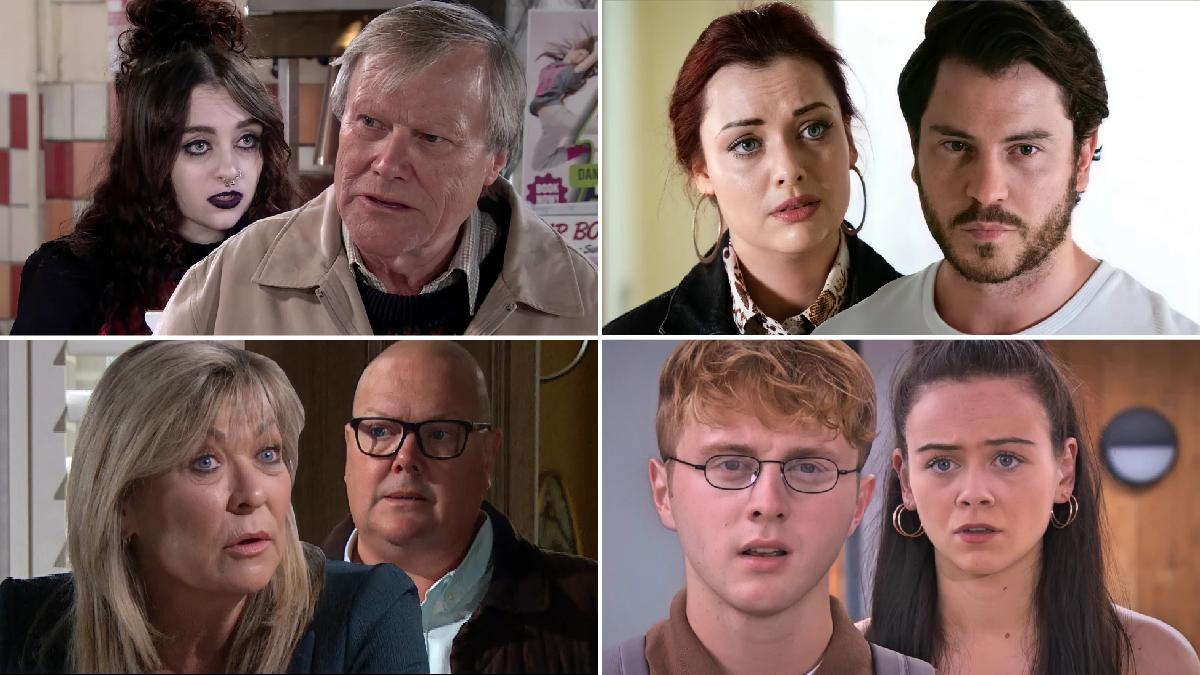 A number of new opportunities present themselves for some of soap’s biggest characters next week, and let’s just say they waste little time in taking action!

Nina Lucas (Mollie Gallagher), for one, makes a huge decision about her future in Coronation Street, while Kim Tate (Claire King) makes Paddy Kirk (Dominic Brunt) an offer in Emmerdale.

And afterwards, he contemplates silencing her for good. Will he succeed?

Over in EastEnders, Gray Atkins (Toby-Alexander Smith) sets his sights on Whitney Dean (Shona McGarty), and the two decide to make a go of things. But Whitney has no clue just how dangerous Gray really is.

It’s a huge week for many of soap’s finest, and if you’d like a little bit more information about what’s coming up, then we’ve selected 25 unmissable moments to look out for!

1. Imran is stunned when Sabeen wants him to join her on Harvey Gaskell’s appeal case, making reference to where he was on the night of Corey and Kelly’s verdict. He fears she’s going to resort to blackmail, but he sticks to his guns – adamant that Harvey should remain behind bars. Toyah questions the intimacy between the former lovers, and asks Imran if he’s cheating on her with his ex. Will Imran come clean?

2. It’s the day of Kelly’s sentencing, and Imran delivers yet another superb speech, begging the judge to consider her mental health and troubled upbringing. Kevin, meanwhile, rages at Sabeen.

3. David reports Daniel to the school for assaulting Max. Daniel is summoned for a meeting with the deputy head, and while he apologises for grabbing Max’s jacket, he remains adamant that the teen stole his wallet. Shona refuses to support David’s actions, but that doesn’t stop him from reporting Daniel to the police! Max, meanwhile, uses a bank card in Dev’s shop which is declined.

4. Audrey feels hurt by Rita’s betrayal, and finds some comfort in Shona’s words. Gail, meanwhile, organises a birthday party for her mum, and invites Rita, but Audrey is left offended by the so-called ‘old lady’ gifts she receives. Rita shows up, but Audrey’s not interested in burying the hatchet, and therefore she heads to her car. But there’s soon a loud noise, as she reverses into Rita’s car!

5. Corey is promoted to County’s first team and put on the bench for the next match. Kevin is livid, and he decides that his County teammates needs to be made aware that they’re playing alongside a murderer. Tim and Kevin have a word with County’s manager, but he’s quick to remind them Corey was acquitted. Stefan – having got word of Kevin’s attempts to ruin Corey’s reputation – pays him a visit.

6.Roy encourages Nina to seek an outlet for her creative talents, and she contemplates resuming her job at Underworld, but she later discovers she’s been replaced. After some thought, Nina decides to study fashion at Weatherfield College, and thus asks Asha to model some samples, though she reminds her that they’re just mates. Asha bursts into tears once alone, so Aadi suggests she find someone else to date.

7. Danny tells James he overheard Ed discussing a cash flow problem, which leaves him puzzled. James demands the truth from both Ed and Aggie, and they reveal that Grace forced them to give her their house and carry out the renovations for free if they’re to continue seeing Glory. James is speechless!

8. Janine is forced to explain herself when Scarlett finds Zack in the living room after spending the night, much to Kat’s dismay. She resolves to get a new job and overhaul her life for her daughter, and when she sees Frankie struggling to handle the crowd in the Vic, she spies an opportunity. Frankie agrees to give her a trial shift, Janine sets foot behind the bar, and all is right in the land of Walford once more!

9. Gray asks Whitney out for dinner but she declines, claiming she still thinks about Kush all the time. What’s more, she’s annoyed, as Jen tells her she’s blown her chance at stardom. Gray, however, masquerades as her manager, and has a word with Jen. His efforts pay off, as Jen tells Whitney she’s on the line-up for her entertainment showcase. Whitney softens, and tells Gray they can give it a go, but they need to take it slow.

10. Harvey is livid when he discovers Dana is intent on deferring university, but she defends her choice. He turns to Bobby for support, hoping he will try and convince Dana to take her place at uni. Bobby reluctantly agrees, but his efforts backfire dramatically.

11. Isaac tells Sheree that the school said he can start work again, and that he knows she was only trying to do what was best for him. Sheree is torn, and when the family plan a housewarming party for Lola and Isaac, she’s left feeling all the more isolated.

12. Alarm bells ring for Bernie in the wake of Mick’s accusations. She’s wary, but Keegan vows to help his sister get to the truth. A heated showdown ensues, and Keegan later realises he went too far after Tiffany steps in to diffuse the situation. He apologises, and Rainie agrees to take a drugs test.

13. Tiffany and Keegan agree to be mates, but she later receives a letter that he’s frozen their joint account, which leaves her fuming. She grabs a drink with Whitney and a bottle of champagne arrives at their table. But who is it from?

14. Zack bumps into Martin and convinces him to go for a drink. Afterwards, he insists that Martin move in with him and Sharon. Sharon, meanwhile, offers Martin some advice, and gives him the number of a solicitor that can help with the divorce. Martin, however, gets a shock when the lawyer badmouths a client’s idiotic ex-husband!

15. Leyla thinks Liam has been behaving rather oddly since he started at Hotten General, and she’s left concerned when she discovers he doesn’t work there. She’s knows he’s hiding something, and soon becomes convinced that he’s having an affair with Bernice – especially when she sees him putting flowers in the back of his car! Leyla and Priya follow him to a house with a ‘For Sale’ sign outside.

16. Paddy worries that Kim will report him over the horse-doping, but Kim hasn’t decided what she’s doing just yet. Kim later asks him to dope her race horse again, but Al catches the two of them amid a private conversation and proceeds to blackmail Paddy!

17. Chloe bursts into tears when describing her home line to Sarah and Noah, but Noah manages to find the right words to console her. He agrees to keep quiet about the fact that Sarah has been meeting up with Chloe, but only if he can come along to their meet-ups in the future. Sarah realises Noah fancies Chloe.

18. Bob begs for some news on April in the wake of her trolling ordeal, but Marlon is unforgiving. Rhona, meanwhile, discovers that her assault charge is progressing to a court date.

19. Harriet reveals she’s been feeling a lack of purpose since the death of DI Malone, but she’s left thoughtful when PC Swirling informs her that the police are recruiting and that she should consider re-joining the force.

20. Chas fights back tears as she explains to Faith and Liv that Grace’s anniversary is nearing.

21. Timmy is desperate to win Peri’s affection, and therefore he uses his hand as an excuse to pay her a visit at the hospital. Juliet, meanwhile, comes to realise that her girlfriend has a stalker, and after witnessing them together, she works out that it’s Timmy! She makes an accusation, and Timmy decides that drastic action is necessary, as he pushes her down a flight of stairs! Afterwards, he pays her a visit in hospital, and contemplates silencing her for good.

22. Shaq and Imran locate Misbah’s former roommate, who would’ve known her when Shaq was born, and decide to arrange a reunion, but Misbah works out what her children are up to, and thus meets with Shaq instead, railing at him for interfering in her life. She gets into a heated argument with Shaq, and – desperate to make him stop searching – she tells him that his dad is dead!

23. Ali makes a move on Mandy, but when Misbah spots her all glammed up for her date with the doc, she issues a stern warning, telling her not to get involved with Ali. Will Mandy listen to Misbah’s advice?

24. Ella wants to hang out with Charlie, which leaves Leah annoyed. Nancy is stunned when Leah refers to Ella as Charlie’s ‘girlfriend’, and it appears as if there might be some truth in this. Darren catches Charlie was attempting to buy condoms, and Nancy is rendered speechless when she discovers this. They warn him against having underage sex, but will he listen?

25. Prince prepares to tell Goldie about him and Olivia moving to New Zealand, but he struggles to do so. Olivia, however, blurts out the truth, leaving Goldie speechless.