Dexter’s secret is out, but will he be able to justify his lies?

That’s the big question going into Dexter: New Blood‘s sixth episode, titled “Too Many Tuna Sandwiches.” While Dexter’s on thin ice with Angela, he can’t seem to figure out how Angela learned about his real identity. In the midst of all that drama, Angela makes another shocking discovery. What — or rather, whom — did she find this time? Read on for a recap.

Dexter worries about Harrison, despite the fact that the teen’s apologies about everything that’s happened lately. Dad questions a job application he finds sticking out of Harrison’s bag, but when he finds out the job is for Kurt, he refuses to sign off. The fact that Kurt is taking such an interest in Harrison has Dexter’s spidey senses tingling.

Angela pulls Dexter over, but this time it’s not for kinky role playing. She asks for his license and registration, specifically, the one for Dexter Morgan. Ouch. She shows him the obit she found and tells him to drive directly to the station. Dexter explains that he was running from “from all the killing” that was happening in his life. He tells her that Rita was murdered, followed by his sister, “the closest person to me in the world.” He couldn’t go back to homicide with all the blood, violence and hopelessness, and didn’t want to pass on all of that horror to Harrison, so he decided to start all over. Angela seems sympathetic, but says he turned her life into a lie. “How can I ever trust you, Jim?” He asks if they can talk it over more over dinner, but she’s not ready for that yet. 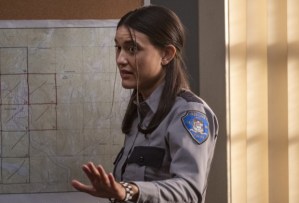 Dex starts to wonder who found him out. He passes Molly in the station, and wonders if she’s the sleuth. Meanwhile, Molly asks Angela if she can interview Kurt to try to catch him in a lie, but Angela gives her a hard no. Under no circumstances is she allowed to spook a possible suspect before the cops can build a case against him.

Dexter listens to Molly’s podcast about… him. Molly reports that Sgt. Doakes went down for the Bay Harbor Butcher murders, but notes that he was out of the country when some of those killings took place. But the powers that be were antsy to close what became an embarrassing case for the department. Molly suggests the butcher may still be out there. Dexter’s paranoia runs wild: “She could definitely be Angela’s source. Is she coming for me?”

Dexter tags along to Harrison’s next therapy session, and tells the therapist they could use some tips to better communicate. Harrison tells the doc his full story, and says maybe that’s why he got high. The doctor then notes that both father and son share abandonment issues and inherited trauma. After Dex mentions his marriage to Rita fell apart, Harrison says his mother was murdered. Dexter asks if he remembers anything about that, and the boy admits he only knows what he read online. But is he telling the truth?

Angela and Logan spitball about Kurt, and wonder if there’s something hidden near the local caves. Logan doesn’t seem to believe her theory, but Angela is determined to investigate anyway.

Dexter meets Logan for a beer under the guise of wanting advice for how he can patch things up with Angela. Really, he’s snooping for info about Molly. Molly and Logan broke up, but she’s still in town because she’s working with Angela. “I’m doomed,” thinks Dexter.

Harrison opens up to Aubrey about therapy, and admits that he thinks about hurting people. And hurting Ethan wasn’t the first time, he says. The boy is clearly worried and in pain. Aubrey tells him that they’re both outsiders, but it doesn’t have to destroy them… and then they mack it. The next morning, Angela finds Harrison in Aubrey’s bed, and promptly brings him home. Angrily, she tells “Jim” to handle it. While he certainly has his hands full with Harrison, Dexter can’t stop thinking about his Molly sitch. 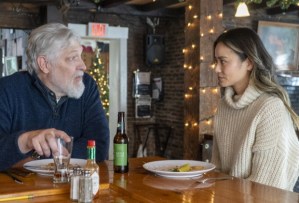 Later at the bar, Dexter lurks while Molly and Kurt chat. He charges his phone behind the bar, while secretly recording their conversation. Molly tells Kurt that his son wasn’t at the hotel, and he cops to lying about the Facetime. He says Matt showed up to his house drunk as a skunk, and that he’s still hiding out at his cabin. He offers her a deal: If he takes her to the cabin so she can interview him, she has to promise not to tell anyone where Matt is. Is Molly about to get her face blown off, too?

Dexter follows them and notes how off the grid the place is. A generator for electricity. A propane tank for heat. It’s “serial killer 101,” Dex thinks. Kurt leads Molly through his basement’s looong creepy hallway, and Molly nonchalantly pulls out her mace. Dexter interrupts, saying he was driving by, and just wanted to make sure high school kids weren’t breaking in. Molly spills that Matt’s in the apartment, but Kurt pretends Matt simply isn’t home. Dexter brushes past him and storms in, immediately noticing the camera, and the fact that the door locks from the outside. Dexter offers Molly a ride home, and the spooked podcaster gratefully accepts.

Molly says it started to feel like she was going to be an episode of her own podcast. “You have no idea,” he thinks. She asks Dex to not tell Angela she talked to Kurt. He agrees… and lets her live (for now). Plus, he’s convinced Kurt is the serial killer Angela is looking for.

Angela and Teddy check out the caves, and find a section of rock that looks man-made. They break down the wall, revealing a tight hidden path. She crawls through the corridor to a larger opening, and finds a human foot. The foot leads to the rest of a body, and after examining the remains, she realizes it’s Iris.

At Harrison’s wrestling bout, he wins his big match, but breaks his opponent’s arm after the whistle blows. When Kurt tells Harrison he’s proud, Dexter rushes over to push him, and warn him to stay away from his son. But a call from Angela sidetracks Dexter. When he asks if she’s OK, she says, “I don’t need Jim. I need Dexter Morgan.”

The plot thickens! Will Dexter be able to put Kurt in Angela’s crosshairs without getting caught in the middle? Let us know what you thought about the episode by dropping some comments.