Britney Spears is getting married again, and we’re hoping the third time’s the charm for the “Lucky” singer. Spears took to Instagram on September 12 — which happened to be her son Jayden James’ 15th birthday — to share the happy news that she and fitness model Sam Asghari are engaged. In a video, fans got a good look at her engagement ring, which featured a round, 4-carat diamond. According to Page Six, it was designed by New York-based jeweler Roman Malayev and has Asghari’s nickname for the “Stronger” singer, “Lioness,” engraved on the band.

Spears let her fiancé know that she adored the ring, and the pop star’s excitement was palpable as she proudly showed it off. Some of her famous Instagram followers flocked to the comments section to congratulate her, including Paula Abdul, Kesha, and Rose McGowan. “This is the most wonderful news. Of course. You are glowing and your fiancée did a beautiful ring,” wrote “Legally Blonde” star Selma Blair. Her old pal Paris Hilton reminded everyone that she’s also going to be a bride in her response: “Congratulations love!! So happy for you! Welcome to the club!” Meanwhile, “The Bachelorette” star Kaitlyn Bristowe was so overcome with emotion that she needed some time to process the proposal. “I’m going to need 3-5 business days to recover from this news,” she wrote.

But there was one celeb who didn’t react to the news with excitement or a congratulatory message: “The Help” star Octavia Spencer. 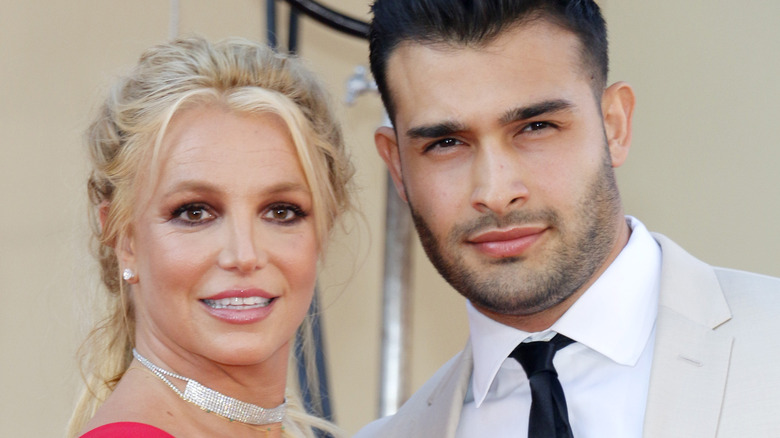 Sam Asghari popped the question just days after Britney Spears’ father, Jamie Spears, petitioned the Los Angeles County Superior Court to end the 13-year conservatorship that Britney has been fighting so hard to dissolve. During a June hearing, Britney claimed that the conservatorship prevented her from getting married again, which may explain the timing of Asghari’s proposal. However, some fans found it a bit suspect. “Sweetheart think about it he didn’t propose to you until he knew you were finally going to get all your money!!! Dump that dude,” read one response to Britney’s Instagram post. Octavia Spencer had another idea. “Make him sign a prenup,” the “Hidden Figures” star advised.

This isn’t the “Circus” singer’s first rodeo when it comes to marriage. In 2004, she wed her childhood friend Jason Alexander in Las Vegas. The couple did not sign a prenuptial agreement, but their marriage was annulled just 55 hours later (via ABC News). When Britney married Kevin Federline later that same year, they did have a prenup in place. After they divorced, TMZ reported that he received $1 million from his ex.

It looks like Britney might also protect her assets when she marries Asghari. On his Instagram Stories, he responded to the fans concerned about him walking away with a chunk of Britney’s fortune in the future. “Of course we’re getting iron clad prenup to protect my jeep and shoe collection in case she dumps me one day,” he quipped.