The miniseries “The Girl from Plainville” is downright heartbreaking most of the time, but in Tuesday’s finale, there was a moment that was even more devastating than most.

In the finale of the based-on-a-real-story tale, Michelle Carter (an excellent Elle Fanning) has just been convicted of involuntary manslaughter for repeatedly encouraging her then-boyfriend to take his own life. As she is being led away to jail, the show deviates from reality and imagines one final fantasy sequence: Michelle and Connor (Colton Ryan) meeting up at a bar years later, with none of this awful tragedy between them. For a moment, they are just two troubled teens now all grown up, able to find some peace and meet under better circumstances.

“I think we were really trying to decide how the show was going to end because the real-life people shared his last phone call,” Fanning told IndieWire. “We don’t know what was said in that phone call and I think it was really not our place to try to come up with what was said or to write something that [was speculation]. We didn’t want to do that [because] it really would be kind of insensitive.”

Instead, the show turned to a format that they regularly explored in the eight-episode miniseries: the fantasy world of Michelle’s imagination. Previously in the series, Carter’s imagination brought to life recreated “Glee” performances starring Michelle as well as choral concerts that Michelle saw as celebrating herself. The bar scene was a perfect callback to something that had been building all season.

“[This fantasy is] where she’s living until she has to ultimately accept the guilt and her responsibility for what she did,” Fanning said. “I think [this] was kind of the only way for us to be able to end this series. Also [it’s] so heartbreaking to see what their lives could have been if they really had met years later in a bar as college students.” 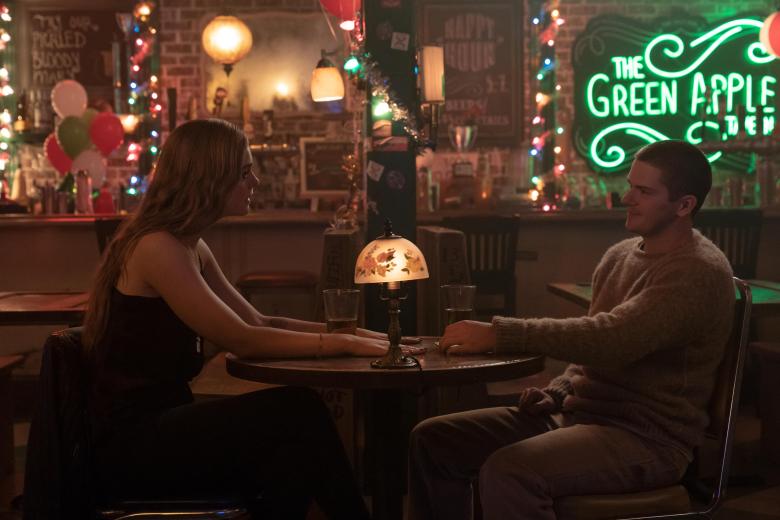 The Girl from Plainville”

The bar scene is sure to remind film fans of another bittersweet tale.

“Colt and I, we felt like we were almost an ‘Eternal Sunshine,’” Fanning said. “In a way it was like another dimension that we got to play with in those fantasy moments, but I think it was the only way to kind of show what was going on in Michelle’s mind without trying to write what we thought happened in real life because we can’t do that.”

“The actors were so good that most of the takes could work, so it became about calibrating where we were emotionally,” editor Libby Cuenin previously told IndieWire about the performances on the show. “Should we heighten a moment, or play it more calmly? In a vacuum every performance was, in and of itself, fantastic.”

“The Girl from Plainville” is streaming on Hulu now.