Before Euphoria‘s Season 2 premiere Sunday, I would’ve said I didn’t care much about Fezco’s origin story. I would’ve been so, so wrong.

The season opener kicks off with a deep dive into Fezco’s upbringing (Spoiler Alert: It’s sad) and ends with the soft-spoken drug dealer cracking Nate over the head with a vodka bottle at a New Year’s Eve party. Normally I don’t condone violence… unless it’s against a fictional character I truly despise, and so in this case, carry on, Fez!

Meanwhile, Rue’s heart nearly stops, and Cassie gets trapped in a bathtub. Neither of these are metaphors. Read on for Episode 1’s highlights. (And if you need a quick refresher on Season 1, go here.)

FUNDAMENTALS OF FEZCO | The hour opens on a blonde woman holding a gun and wearing a jacket that reads “Gods Word, God’s Will” on the back. She walks into a strip club and makes her way to the back office, where a man is being serviced by a woman wearing very little in the way of clothing. “Hey, f–kface!” the blonde woman calls out, then shoots him once in each leg and walks out. Back at her car, a little boy with a black eye is waiting quietly in the passenger’s seat. “I just spoke to your daddy. You’re going to come live with grandma now.”

As we watch the boy grow up in the blonde woman’s care, Rue’s voiceover clues us in that we’re watching Fezco’s story. He quickly becomes his drug-dealing grandmother’s business partner, accompanying her on deals and handling the books. Though this may sound grossly negligent, it’s very clear that Grandma loves Fez and wants the best for him. One day, a woman buying Grandma’s product leaves her baby son as collateral… and never returns to collect him. Grandma essentially adopts him, too, though Fez does most of the childcare. The baby becomes known as Ashtray — aka the younger kid that hangs around Fezco in the present-day storyline — because he tries to eat discarded cigarette butts near the start of his time in his new home. 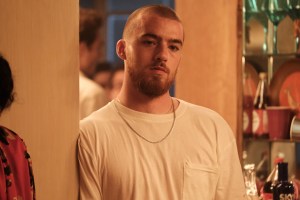 “They were a family,” Rue tells us, allowing that it wasn’t always an ideal situation: During an angry attack on someone who wronged her, for instance, Grandma accidentally hits Fez in the head with a crowbar and gives him a concussion. And when she collapses one night after dinner while Fez is still a young boy, he drives her to the hospital rather than call the ambulance to come to the house, which adversely affects her condition.

“The next thing he knew, he had a business to run and a little brother to take care of,” Rue says. “And however hard he thought life was, it got harder and more complicated. Because the more you move up in the world, the more enemies you make.”

AULD ACQUAINTANCE | Next thing we know, it’s New Year’s Eve, and a somewhat high Rue is in Fez’s car, rapping along to Tupac’s “Hit ‘Em Up” in the backseat while an armed Ash rides shotgun. Fezco makes a stop to do some business, telling Rue to stay put. The guy he’s dealing with has a girlfriend, Fay, who also gets put in the backseat while the males do business. It takes Rue all of two minutes before she launches into The Sad Ballad of Rue and Jules, but Fay’s got other things on her mind: namely, shooting heroin into her thigh while a slightly freaked-out Rue wonders if that’s a great idea.

Without warning, two men yank Rue and Fay out of the vehicle and march them into the apartment where Fez and Ash are negotiating. An aggressive guy named Brucie is very angry about the idea that someone might be wearing a wire, so he puts on Gerry Rafferty’s “Right Down the Line” and demands that everyone — except Ash, who gets stashed in a closet — strip naked. Rue is very hesitant to do so, and when Brucie realizes she’s the last to disrobe, he grabs her and I get very worried about what’s going to happen next. But all he does is throw her in the tub, turn on the shower and make her pull up her shirt and pull down her pants.

When everyone is reassembled in the kitchen, a woman named Lori who seems to be running the show wonders where Mouse is (remember? That scary dude from last season?). And, um, Ash killed him with a hammer. Then Lori wonders what Rue is doing there, and Fez responds that she’s “family” and that he trusts her with his life. Seemingly satisfied with his answers, she retrieves a blue suitcase full of pill bottles from the closet  and asks, “So, you all ready to do some business?” Fez gives her a wad of cash, and they leave.

In the car after, Rue is a chatterbox, laughing about what they just witnessed, but her nonchalance irritates Fez. He points out how dangerous the situation was, but she counters that Lori was a badass, and he grudgingly concurs.

OH, CASSIE | At a New Year’s Eve house party, Lexi can’t find Cassie, who was driving over with her but who got out of the car after the sisters argued. We find Cassie tipsy at a convenience store… which is where Nate, who’s there to buy a six-pack, finds her. He gives her a beer as they talk about how she broke up with McKay and he’s no longer with Maddy. Cassie murmurs something about how she’s just trying to focus on herself because she keeps making mistakes, and he wonders if she wants a ride to the party.

They both continue to drink as he drives, and she’s giggling and enjoying herself until Nate pushes their speed near the triple digits. And when he hits a bump, the beer she’s holding between her knees splashes all over her dress; naturally, the only solution to this is to shimmy out of her undies while he watches.

The next time we see Cassie, she and Nate are going at it against the bathroom door at the party… and Maddy is banging on the door from the hallway because she has to pee! When Nate yells at the knocking, unaware it’s his ex on the other side, she recognizes his voice and Cassie starts to freak out. Sobbing, Cassie whispers to Nate that Maddy is her best friend. And Maddy won’t relent, so eventually Cassie lies down in the tub with the shower curtain pulled closed, and Nate exits in as casual a manner as possible when your ex thinks you’ve just spent a lot of time dropping a deuce at a party.

Cassie is trapped for a while. After Maddie does her thing — and there’s a whole bit with a hand towel and Cassie’s face that I won’t go into here, but suffice to say, gross — a guy named Travis (BMF‘s Demetrius ‘Lil Meech’ Flenory Jr.) comes in and asks her if she wants to smoke with him. They flirt and eventually wind up leaving to go dance… but that’s when another dude comes in to drop the kids off at the pool, and Cassie finally makes her presence known and gets outta there. 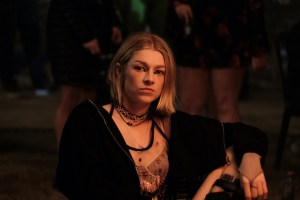 PARTY FOUL, PART I | Everyone is at the party. Jules, now with a bob, laughs with Kat — who’s very lovey-dovey with Ethan. “My goal tonight is to blackout this entire f–king stupid year,” Jules says to Kat at one point. (Side note: GIRL, SAME.) Fez very sweetly flirts with Lexi (at one point, he calls her “the coolest person in here,” and he seems genuinely impressed with her intelligence) and they exchange numbers. McKay and Cassie have a talk that leaves them both crying; when Nate interrogates his pal about it, though, he assumes the exes slept together and won’t stop asking crude questions about how it all unfolded. (I’ll say it several times this season, I’m sure, but ugh Nate is the worst.)

Rue is at the bash, as well, and it doesn’t take her long to a) find Fay’s heroin in Fez’s car and shoot up, and b) then find a guy (musician Dominic Fike) doing drugs in the laundry room. “If you tell me what drugs your doing, I’ll tell you what drugs I’m doing,” she says by way of introduction. But pretty soon she realizes that her heart isn’t beating the way it should, and she weakly asks her new friend to take her pulse. When it becomes clear that she might be going into cardiac arrest, she instructs him to crush up some of her adderall so she can snort it. The DIY fix works, and Rue chuckles as things normalize. “I’m not sure it’s a good thing you’re better,” the guy says, but he high-fives her anyway. 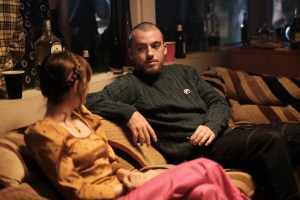 PARTY FOUL, PART II | At one point, Jules tells Kat that when she was with Rue, “My world got too small, and it didn’t feel good.” Nevertheless, Jules is drawn to her (former?) bestie, and is upset as she asks when Rue relapsed. “The night you left,” Rue replies. Later, right before midnight, Rue finds Jules and apologizes for being mean. “I’m just having a tough time,” she adds. They admit that they miss each other, and Rue says she really wants to be with Jules. At midnight, they kiss.

Nate, too, gets a New Year’s kiss… from karma, and it puckers up and gives it to him right in his face. Fezco finds Nate at the bar and makes small talk about New Year’s resolutions… then Fez smashes a bottle of Tito’s over Nate’s head, knocking him to the ground. Fez is unrelenting as he pounds the football player’s face; eventually, someone pulls him off, and Maddy, McKay, Cassie and who knows who else carry an unconscious Nate out of the party.

Now it’s your turn. What did you think of the premiere? Grade it via the poll below, then hit the comments with your thoughts!