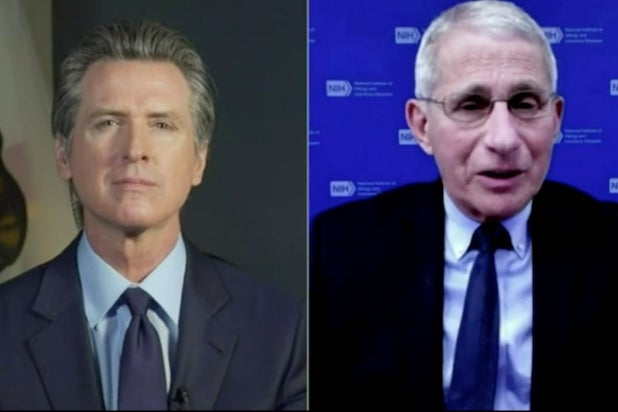 Dr. Anthony Fauci said on Wednesday that if the U.S. “diligently” and “correctly” vaccinates residents through next July, he expects that theaters can reopen with a “semblance of normality” by early fall, offering a glimmer of hope to moviegoers and theater owners alike about the prospects of 2021.

“Schools, theaters, sports events, restaurants — I believe if we do it correctly, we will be there by the early fall,” Fauci said during a virtual conversation with California Gov. Gavin Newsom. “If we do the kind of vaccines through April, June, July, that by the time we get to the early fall, we will have enough good herd immunity to be able to really get back to some strong semblance of normality.”

But to get there, the U.S. first needs to “catch up” when it comes to how quickly the vaccines are being distributed and administered, Fauci said.

Assuming that the country is able to do so in the coming months, Fauci said, he expects that the “priority people” — healthcare workers, people in nursing homes and long-term care facilities, those aged 75 and older and essential workers — will have received their vaccinations by the end of March or early April.

“Let’s say [in] April, it will be what I call ‘open season.’ Namely, anybody who wants to get vaccinated can get vaccinated,” Fauci said. “If we then diligently vaccinate people in April, May, June, July, that we will gradually and noticeably get a degree of protection approaching herd immunity.”