How Much Is Cinemark Giving Up by Allowing Universal Films to Go PVOD Sooner?

For most Americans, not including President Donald Trump, the 2020 election is in the rear-view mirror, with Joe Biden set to assume the presidency in January. But not in Georgia, where a pair of Senate runoff elections is giving local TV stations an early Christmas present in the form of a tidal wave of political advertising dollars over the next two months that figures to be around half a billion.

While Georgia has seen record-breaking down-ballot campaign spending in prior years, there is nothing that matches the intrigue and importance this time around. On Jan. 5, Republican Senators Kelly Loeffler and David Purdue will try to maintain their seats against Democratic challengers Raphael Warnock and Jon Ossoff. Neither candidate garnered 50% of the vote, triggering the runoff. If Democrats win both of those seats, they would deadlock the Senate with Republicans, with each party holding 50 seats. Since the vice president is the tiebreaking vote, that means the Democrats would hold control once Kamala Harris is sworn in, to go along with their majority in the House of Representatives.

“Never seen something like this,” Patrick McCreery, president of Meredith Local Media Group, told TheWrap. Meredith owns the CBS affiliate in Atlanta as well as another independent TV station (WPCH) in the Georgia capital. During Tegna’s earnings call on Nov. 9, CEO David Lougee said that spending “will be very, very large for obvious reasons.” Tegna owns three stations in Georgia, including the NBC affiliate in Atlanta.

Political advertising dollars have already been flooding in. By Nov. 12, $45 million had already been spent on the two runoff races, according to Advertising Analytics. As of Monday, ad spending on local broadcast TV projects were estimated to be at least $34 million each for November and December, with an additional $4.5 million booked for January.

McCreery expects that number to keep growing. He points out that some of the campaign spenders are waiting until Georgia finishes its recount of the presidential election; Biden flipped the state blue for the first time since 1992, but the margin of victory was small enough to trigger an automatic recount. The recount is expected to conclude by Wednesday to allow the state to certify its results on Friday.

“A few of the parties that are going to be spending on this race haven’t jumped into the game yet,” McCreery said. “They’re gathering their facts and waiting to place the buys until either a little closer to the race or until some of the fallout gets out of the way.”

The influx of political advertising dollars is an added blessing during the COVID-19 pandemic, which has dented retail advertising at a time when networks would normally see a rush of holiday advertising.

“We certainly have seen some issues in core advertising due to the pandemic,” McCreery said. “This is obviously a blessing in disguise from the political advertising perspective.”

Georgia stations are hoping for a repeat of the 2017 runoff election in its 6th Congressional district, which also included Ossoff. That race, which had no bearing on the balance of power in the House, ended up being the most expensive House race in history with a total $50 million in advertising. This year alone has already seen a new record for a Senate race in North Carolina, which totaled $260 million.

And that was just one race.

Brian Wieser, global president of business intelligence at media buying giant GroupM, says there is no historical comparison for the dual Georgia runoff, arguing it should be treated more like a general election than a local one because of the unprecedented stakes.

“Political advertising was not a meaningful thing until the last 20 or 30 years,” he said. “Even if there was a comparable situation, in terms of the political stakes of an election, there’s never been an event in politics that’s comparable to this from a media perspective.”

At the outset of 2020, GroupM forecasted about $14 billion in total would be spent on the election, with about $8 billion going towards local television, including cable. Wieser said that while the spend on local TV is closer to $7 billion, it’s still more than $2 billion higher than the 2018 midterms, when local TV took in $5 billion. Now that the election calendar tacked on an additional two months, Wieser expects local TV to hit that $8 billion prediction.

Another aspect that has resulted in a boost to local TV in the Georgia runoff is social media, namely Facebook and Twitter. Both platforms have put a blackout on all forms of political advertising while Trump continues to contest the election results and refuses to concede. McCreery says that while that will “undoubtedly help” their CBS affiliate, it could also boost Meredith’s digital ad revenue for its catalog of websites.

“Instead of 70-80% of the political dollars going to the big three in the digital space, we have the opportunity to help these campaigns target very local specific voter groups through some of our digital platforms and our OTT capabilities,” he said. 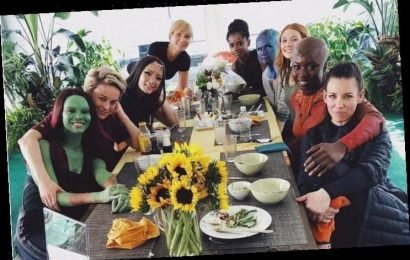