“We’re comin’ for you!” medium and paranormal expert Chip Coffey warns all the ghosts hiding out there 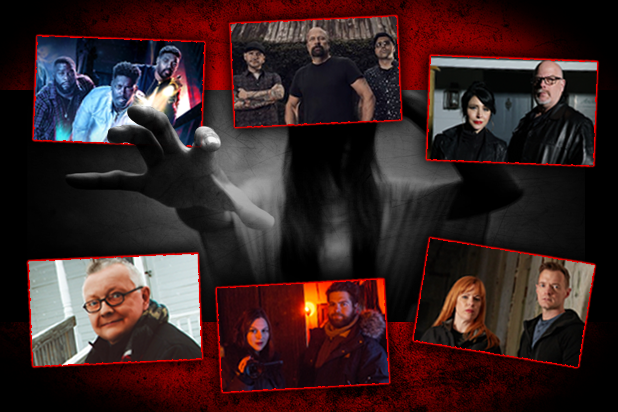 Ghosts, spirits, entities, phantoms, lost souls, shadow people, demons, apparitions… whatever you want to call them, Travel Channel has enough programming about them lined up in October to keep you spooked all month long. The big question is, if ghosts really do exist, why is everyone so obsessed with them?

Travel Channel has become a sort of Paranormal Headquarters, where the mission is to get viewers screaming from now until Halloween. Their “Ghostober” programming (yes, that’s what they’re calling it) has, count ‘em, 16 creepy events rolling out that’ll have you sleeping with the lights on until Thanksgiving.

“We start October with a live event where we have most of our talent from across different shows come together. I call them the Avengers of paranormal investigation,” Travel Channel’s general manager Matthew Butler tells TheWrap.

So, that said, psychic and paranormal expert Chip Coffey warns all the ghosts hiding out there, “Damn the torpedoes, we’re comin’ for you!”

The lineup includes returning hits like “The Dead Files,” “Paranormal Survivor” and “These Woods Are Haunted”; new series like “The Holzer Files,” “Ghost Nation” and “Destination Fear”; and specials like “Haunted Salem: Live” and “Ghost Adventures: Cursed Harrisville Farmhouse.” (The entire schedule is at the bottom for your perusal.)

The audience for paranormal shows has grown in size, appetite and passion. But why exactly is that? “Things go on in the world around us that are just unexplainable,” Coffey says.

Alexandra Holzer, whose father Dr. Hans Holzer is recognized as America’s first ghost hunter, concurs. “I believe because of today’s technology and because of social media, we’ve been given access to more information,” she tells us ahead of her new series “The Holzer Files.” “We have cameras everywhere and they catch things when it quiets down.”

Holzer affirms, “We’re always around spirits…But we’re not seeing them. We’re not feeling them because we’re too busy. We are very small compared to what’s around us, and the paranormal is the main hub of that.”

Jason Hawes, who has been investigating for 20+ years and is joined by fellow ghost hunters Steve Gonsalves and Dave Tango in the news series “Ghost Nation,” says he thinks fascination has grown because more and more people “want to know that there’s something else after they’ve closed their eyes.” He adds, “I also believe that with shows like mine a lot of people stop feeling silly thinking about the paranormal or wanting to be interested in the paranormal and are more open to discussing paranormal topics.”

Creating 16 shows about ghosts with 16 unique angles is a feat in itself. But Butler said that credible investigators are the first step to success. “The talent is very important to us; they have to be credible,” he says. “They have to be believers and they really have to be all in. We don’t have a whole network of the same kind of person looking for a ghost. It just can’t be a team of investigators spending a night in the haunted house. It’s gotta feel different. It’s gotta be different.”

One of the new shows that indeed feels different to Butler is “The Holzer Files.” The paranormal team investigates true hauntings from the recently discovered case files of Hans Holzer, known as “the father of paranormal.” His four-decade exploration into disturbing hauntings like the Amityville Horror house helped spawn legions of supernatural enthusiasts and inspired Dan Aykroyd and Harold Ramis to write “Ghostbusters.”

And it’s not just about finding the ghosts, it’s also, what do you do with them once you have them and want them out of your house pronto? “We’re back to residential investigating homes, which means everything to us because we’re helping people who are scared,” Hawes says.

“The Dead Files” is similar in that the idea is to help the homeowner through the terror of a haunting and lead the spirit to the light. While NYPD homicide detective Steve DiSchiavi researches the history and facts behind each location, physical medium Amy Allan communicates with the dead and identifies the underlying reasons why the entity resides there.

Although summoning spirits from haunted locations and then telling them to take a hike sounds like all fun and games (not!), Butler encourages viewers to watch the shows in darkness. “If people choose to watch with the lights off, we want to make sure they get so sucked into the stories and the investigations that if a phone rings or there’s a knock at the door, they jump a little,” he says. “That makes the experience fun.”

But, it’s not always fun. In fact, Coffey remembers one instance that he calls a “holy crap” moment.

“One of the things that immediately comes to mind is hearing a guttural male, demonic sounding voice come out of the body of a 3-year-old little girl,” he says.

Check out the entire Ghostober lineup below.