THIS Morning viewers called for Holly Willoughby to have a sip of Guinness after her co-host gets stuck into the famous ale. 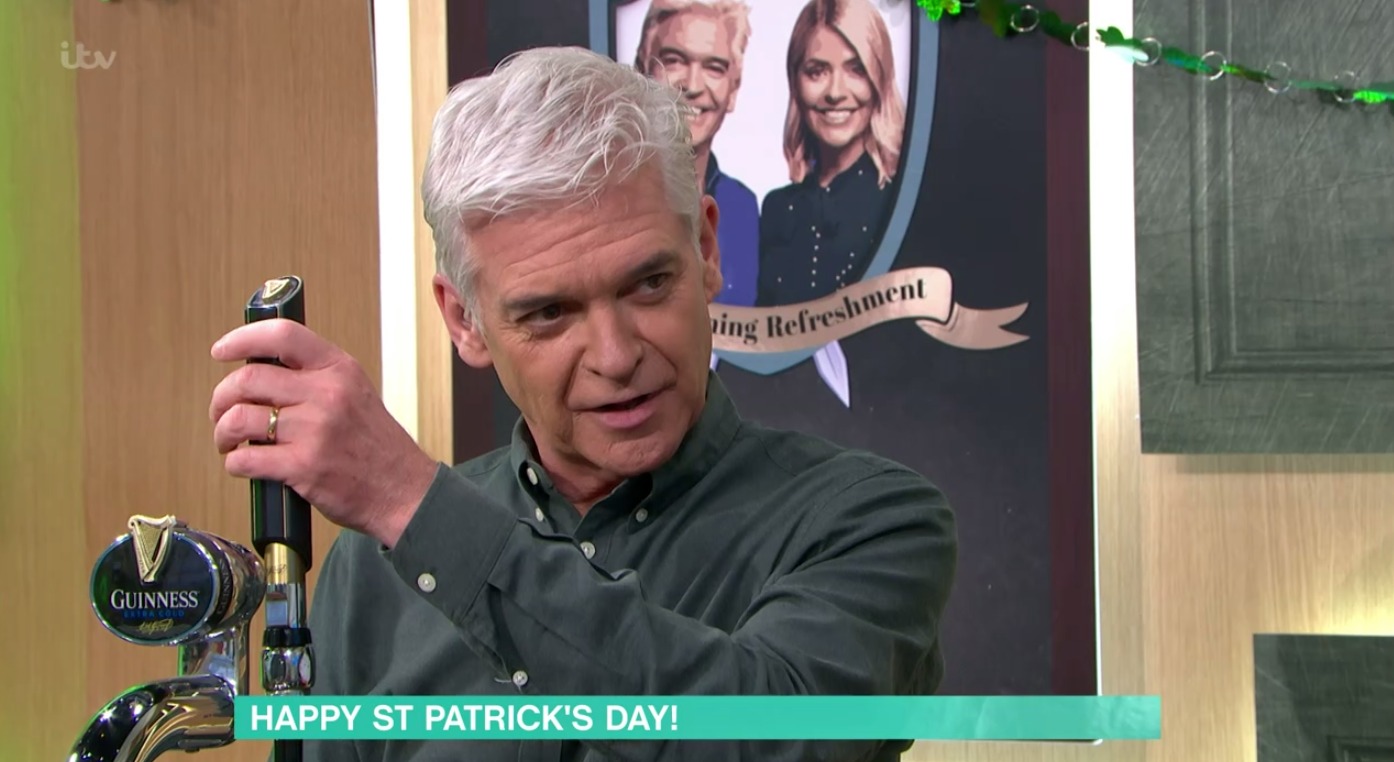 A photo of the pair adorned the bar called 'This Morning Arms' as Phillip expertly poured himself a pint of the stout.

Holly sat socially distanced at the other end of the bar as she gave tips on how to pour the perfect pint.

She then explained how to draw a shamrock in the stout's foam by "doing a figure eight and a slightly bigger one, with a line through." 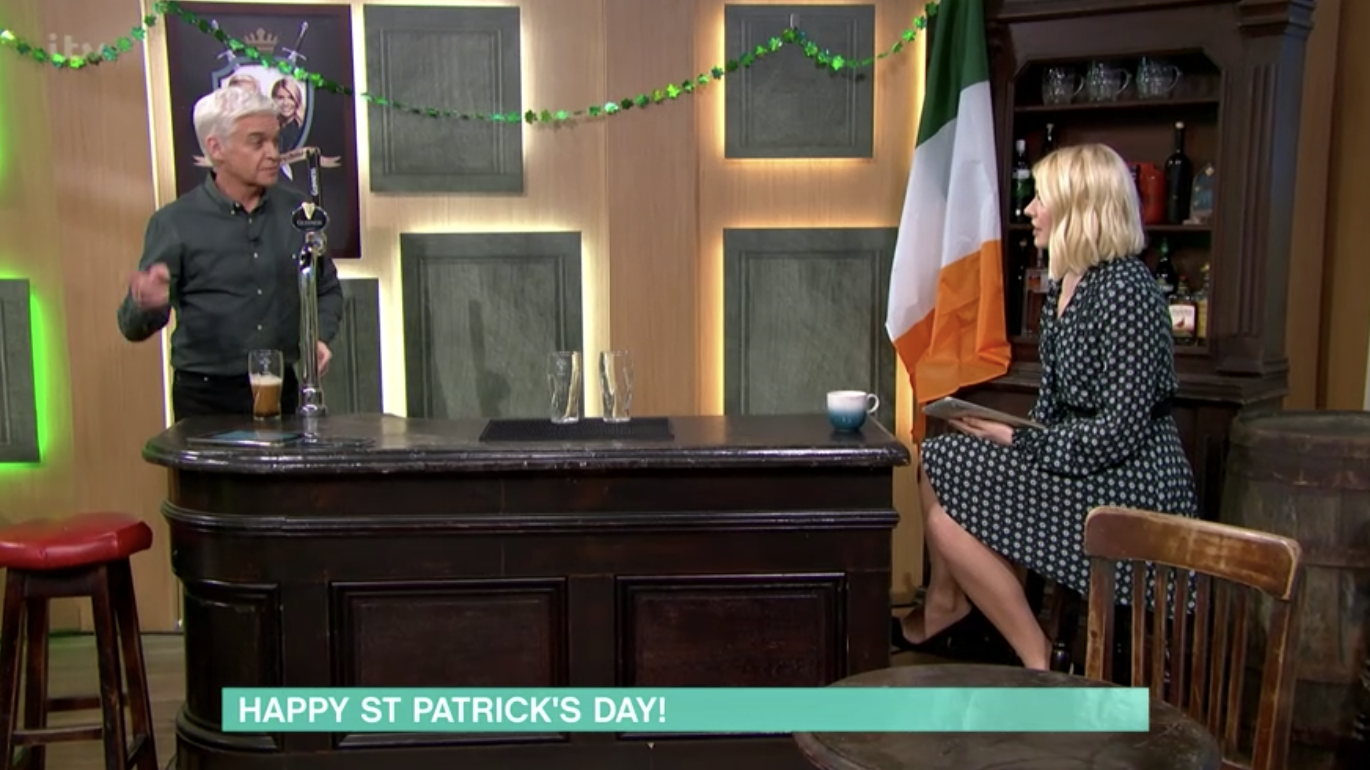 Phillip then joked she would draw something 'naughty' for customers that she 'didn't like'.

After taking time to get the pint right, Phillip then sat at the front of the bar and enjoyed sipping the brew.

"Oh, it tastes so good," Phillip declared as Holly smiled from the other end.

Viewers loved that he was not shy about getting stuck into the brew so early in the morning. 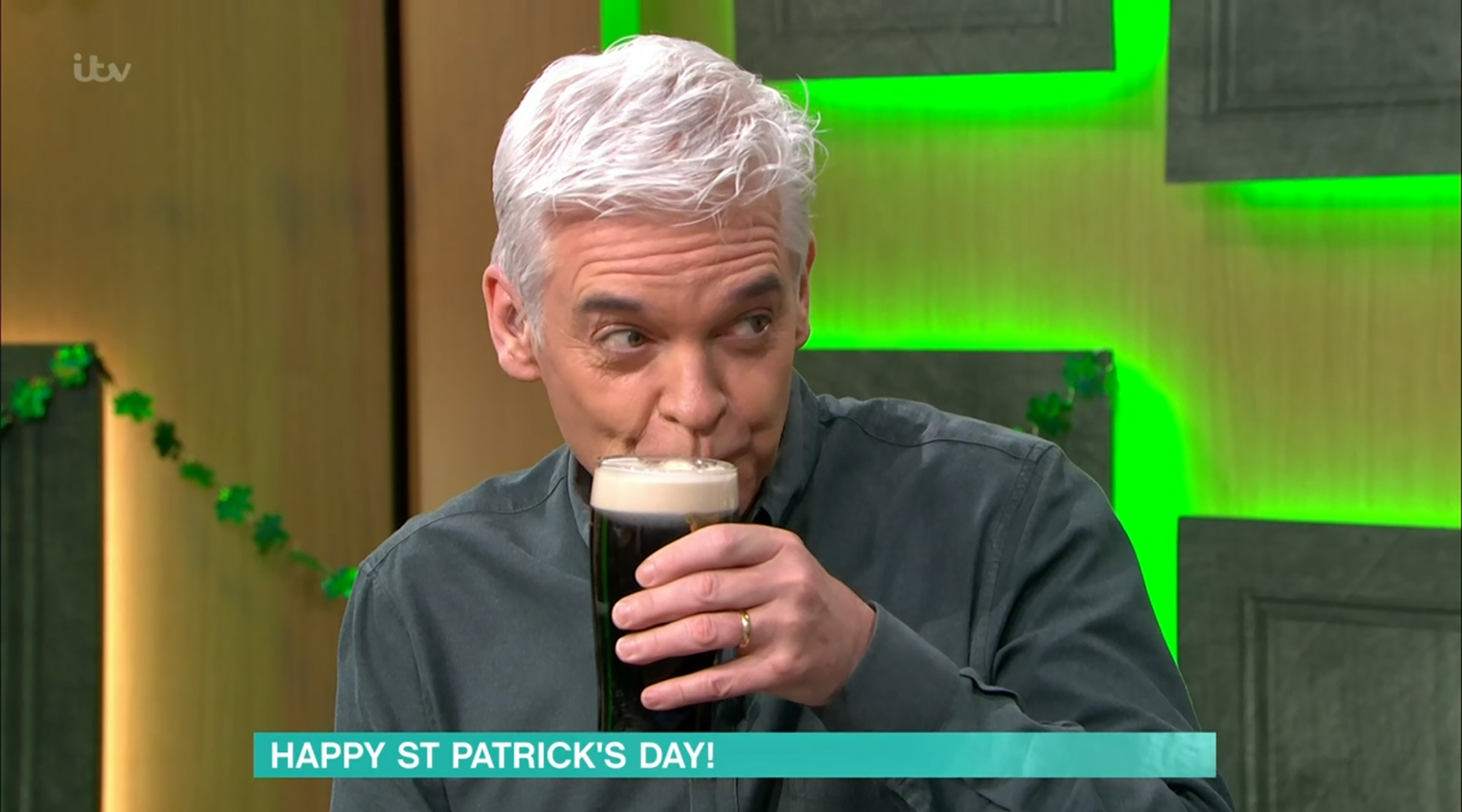 "You can't not love Phil, sippin' on a Guinness at 10am," wrote one Twitter user.

Another added: "Phil Schofield sipping on a Guinness on #ThisMorning at 10 am like he's in a Wetherspoons!"

Later in the episode, the hosts were joined by Irish chef Clodagh McKenna who prepared a traditional pub chowder.

As Clodagh got emotional talking about missing her homeland, she was also keen to get stuck into some stout herself. 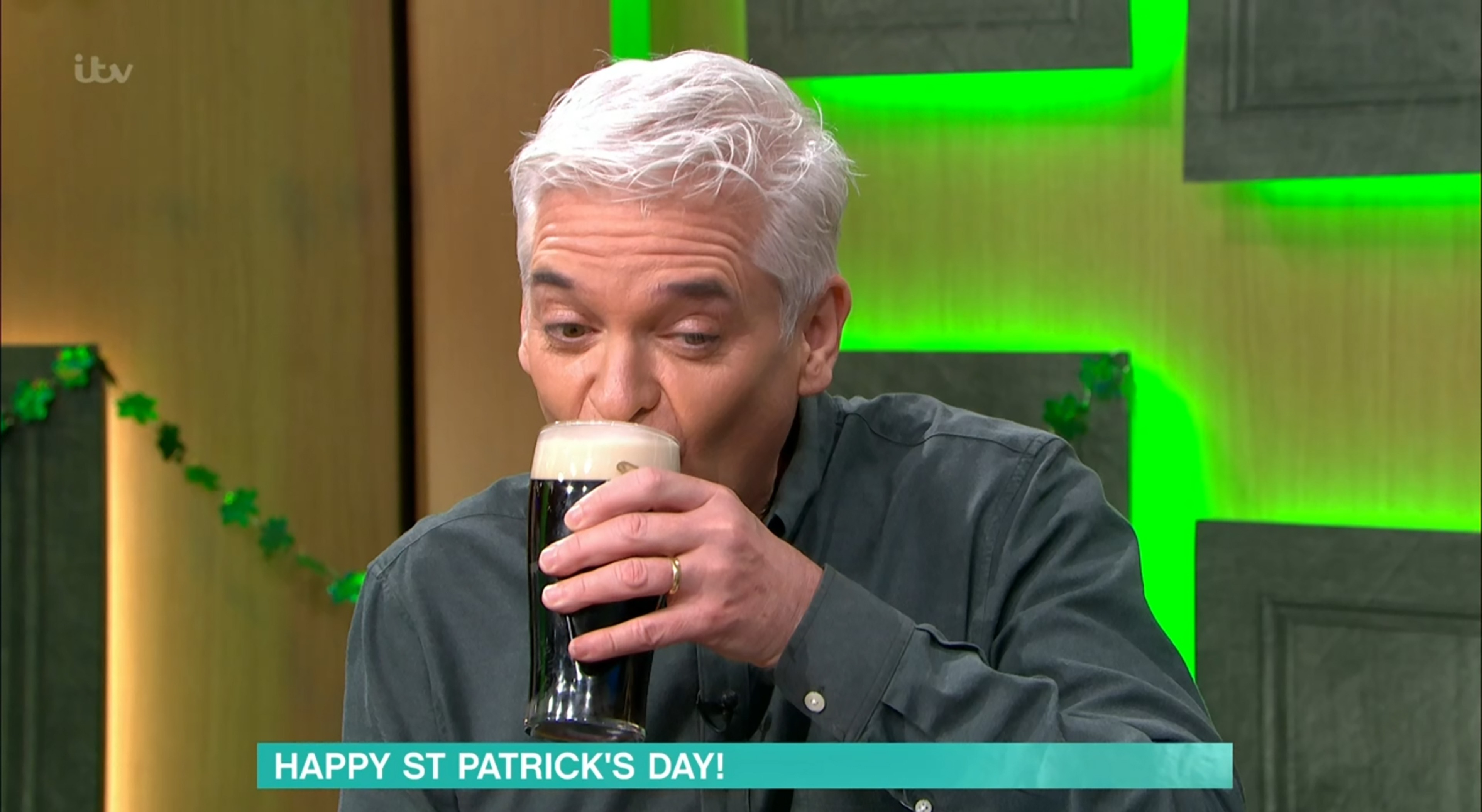 “Is it too early for me to have a pint of Guinness?” she asked, as Phillip joined her for a pint.

As the hosts enjoyed the chowder, Phillip got stuck into his Guinness again just 45 minutes later.

But while viewers pined for the good old days of going to the pub, some noticed Holly had declined to have a drink. 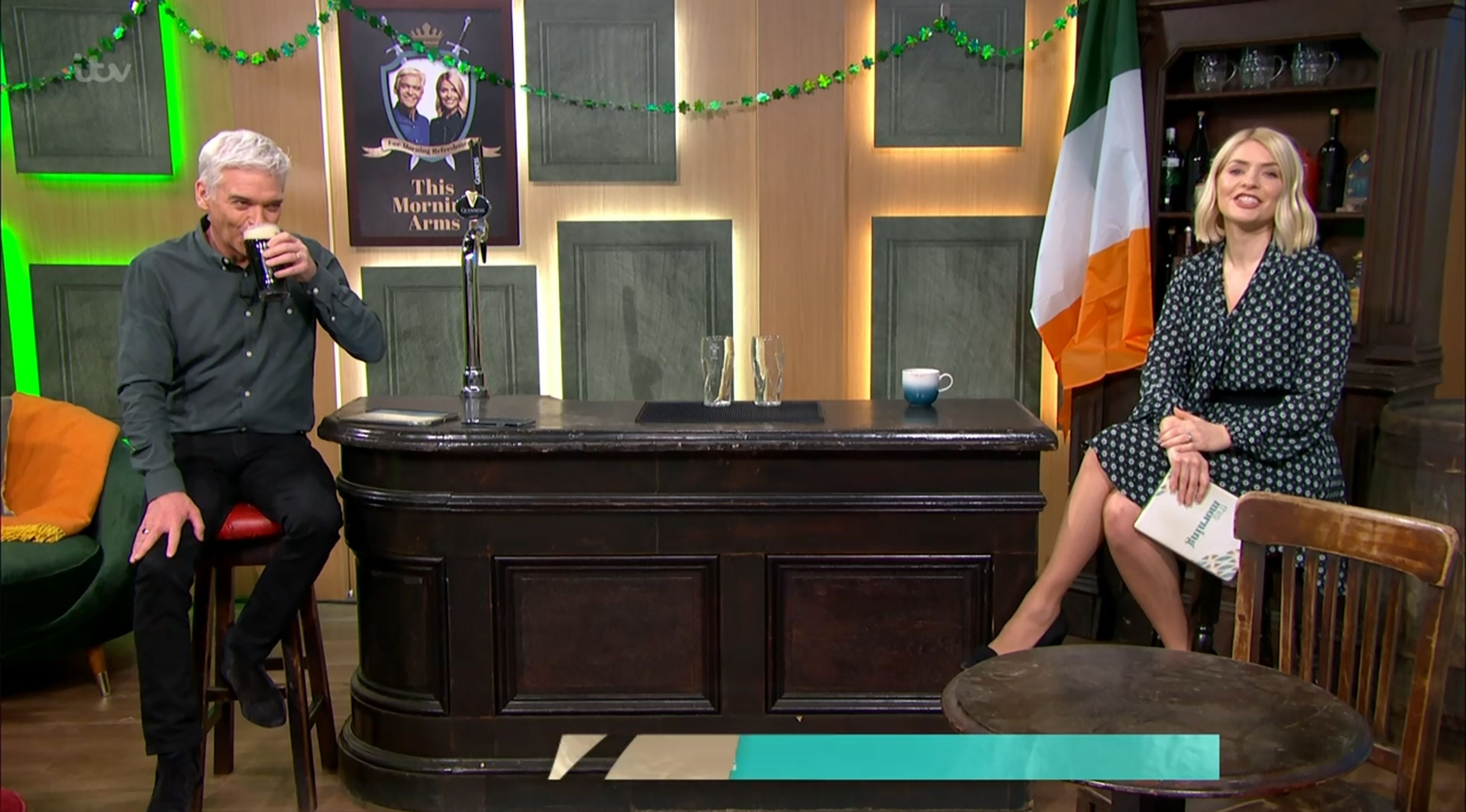 "Go on Holly have some," wrote one Twitter user.

Holly's reluctance to get stuck into the Guinness comes after chef James Martin told her to lay off the booze after she launched into hysterics about his "crushed nuts". 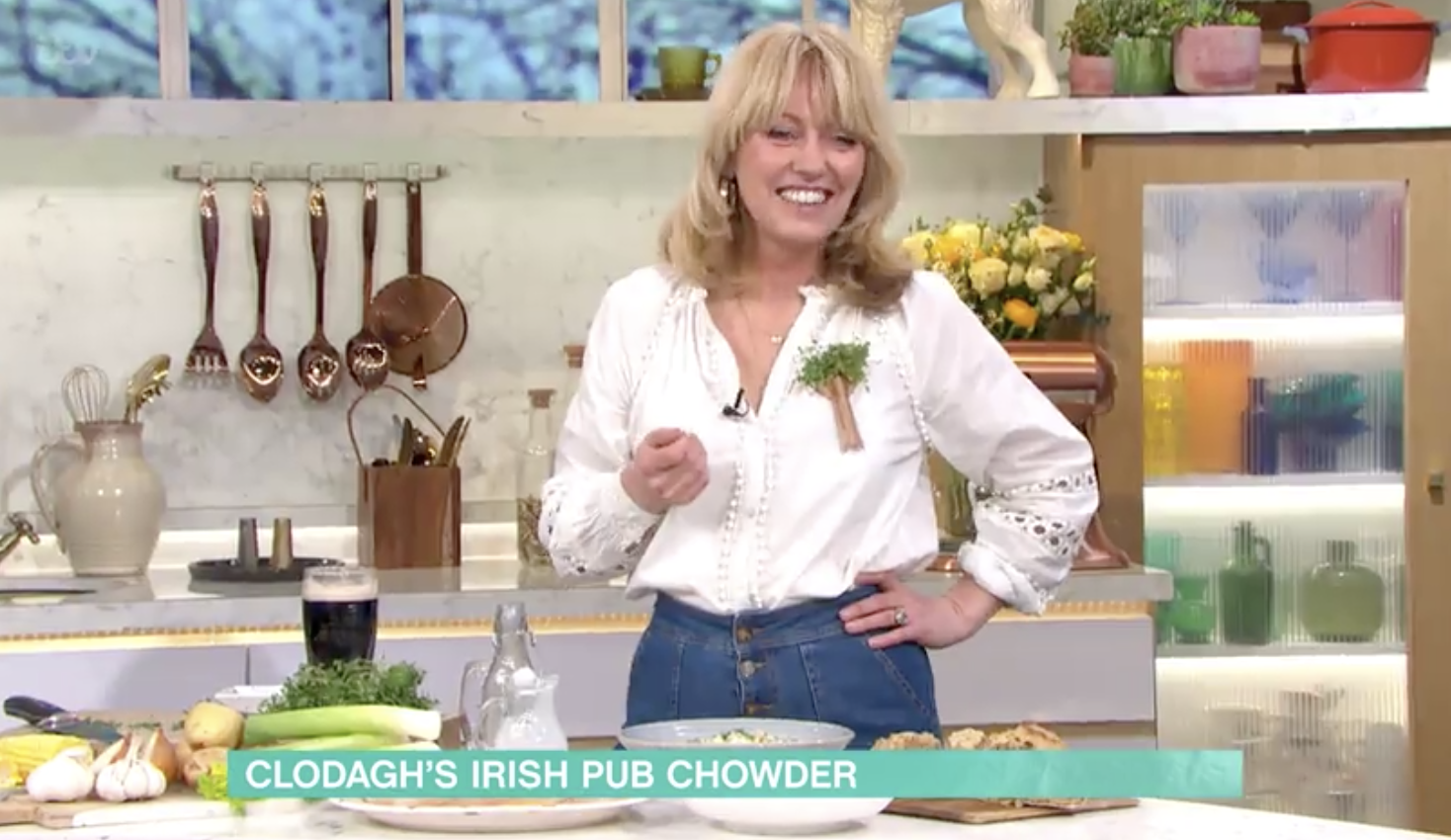 The presenter got the giggles after dunking her biscotti into armagnac as James showed viewers how to make the Christmas biscuits last year.

Stirring the mixture all up, James said: "You have to stir it all by hand, not with a machine."

Asked "why" by an intrigued Holly, James replied: "You want me to say it? You're going to crush your nuts."

Giggling Holly said: "Oh good. I wasn't expecting that. No one wants crushed nuts at Christmas."