To hear Beyoncé speak is such a rare occurrence that any new instance of it, no matter how fleeting, feels special, like catching a glimpse of a shooting star. So naturally, her involvement with Disney’s remake of “The Lion King”— she voices the adult Nala and created a companion album featuring new music inspired by the movie — has dominated the film’s promotional tour, complete with a meeting between Queen Bey and Meghan, Duchess of Sussex, at the British premiere.

But how much (non-singing) Queen Bey should audiences expect to hear in this re-envisioning of Pride Rock, due in theaters Friday?

Though the new film is 30 minutes longer than its predecessor (118 minutes in 2019 vs. 88 minutes in 1994) and features additional scenes for the adult Nala, Beyoncé’s screen time is fairly comparable to Moira Kelly’s in the original.

At my screening of the remake, I tallied 35 lines spoken by her character — interpreting a “line” as being any dialogue a character speaks before another character follows up, whether it’s one word or multiple sentences. Some of those lines are simply the exclamation “Simba!” I tallied 46 lines for Kelly, several of which are also “Simba!” 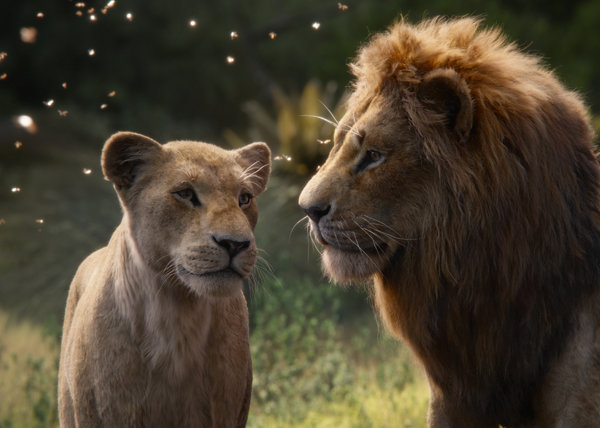 Beyoncé’s musical contributions to the remake vastly outweigh that of Kelly, who did not sing in the original. (The singer-songwriter Sally Dworsky performed Nala’s part in the first “Can You Feel the Love Tonight?”) Besides her duet with Donald Glover (who plays the adult Simba), Beyoncé gets an additional musical moment — her own “Gonna Fly Now” sequence in the form of the chorus of the new song “Spirit,” which plays over Simba’s triumphant gallop across the desert. Both songs feature Beyoncé’s signature riffing.

For some, the ratio of promotion to actual screen time may disappoint. But hey, it’s still Beyoncé, playing a Lion Queen — to her most zealous of worshipers, none of us are worthy.

Aisha Harris is an assistant television editor on the Culture Desk. Previously she was a culture writer and editor for Slate and host of the film and TV podcast “Represent.” @craftingmystyle