It’s time for Ashlyn to shine.

On the latest episode of High School Musical: The Musical: The Series, which drops Friday on Disney+, the rivalry between East High and North High ramps up after a viral video is released by the Wildcats’ main rivals to undermine the school. In response, Miss Jenn hosts a weekend improv intensive to boost her students’ confidence. Meanwhile, Nini works on a new song — the recently released “Granted” — at Salt Lake Slices, where she finds inspiration in Kourtney’s approach to life.

In ET’s exclusive sneak peek from the episode, titled “Yes, And…,” Ashlyn (Julia Lester), who’s been cast as Belle in East High’s spring musical production of Beauty and the Beast, finds her moment in the spotlight in a stunning performance of “Home.”

Lester opened up to ET in at the start of the new HSMTMTS about playing the title role in a Disney classic.

“When I was presented with the opportunity that I was going to be playing Belle and this was a storyline that was going to be throughout Ashlyn’s life in this season, it was a really huge honor,” Lester told ET. “I definitely feel like I have doubted myself in the same ways that Ashlyn is… maybe not doubting herself, but looking at it and being confused and not totally seeing her worth the way that Miss Jenn sees it or the way that her friends see it. And so that part of the storyline was really special to portray onscreen, especially having such a strong connection to what Ashlyn is speaking about.”

“I remember when we were starting to film, Tim Federle, our creator, was so reassuring and made it so clear that even though this is what Ashlyn is going through, and this is maybe what Julia has been going through, that both characters are both people and those characters are equally capable enough to do the tasks that they’ve been given. They just have personal obstacles that they need to overcome,” she continued. “To have his support and to feel support myself and support from everybody was really cool. It’s just a really wonderful storyline that I think a lot of people will resonate with.” 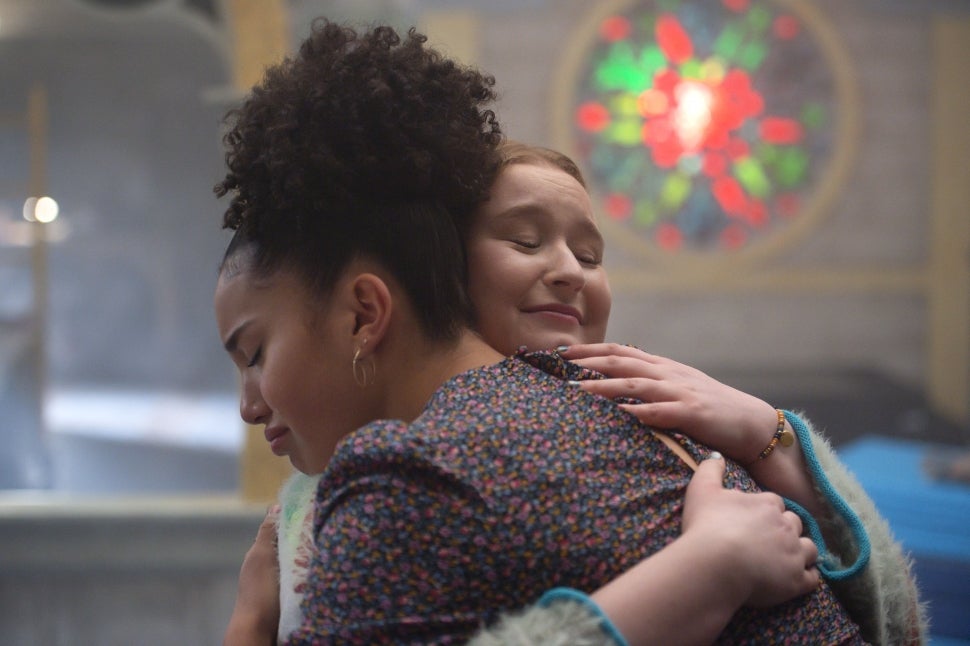 With the spotlight expanding to the ensemble this year, Lester believes Ashlyn’s been given the gift of growth and evolution as she finds her path.

“Ashlyn is put in situations this season where she has to think for herself more than she normally does. I think that’s going to be really exciting and interesting for the audience to see,” she said. “Ashlyn tends to live in a world where she cares a lot about herself, but she tends to put other people before her and does things based off of other people’s best interests just because that’s the kind of person that she is. They’ll be really exciting for her to navigate sides of herself that she isn’t used to seeing or using, or being in touch with. I think it’ll be really cool for fans to see that too.”

“Just as much as she may surprise the audience, she definitely surprises herself. I think that’s been one of the most exciting things too; or one of the most exciting things to film was those moments where Ashlyn discovered new sides of herself,” Lester added. “I think that’ll be really cool because as she was growing in the show, I was growing and it was cool to just feel that in that moment and to see it play onscreen later.”

The actress credited her character for mirroring her own personal journey, saying she’s “grown exponentially as an actor and a person from this project alone — just from the people that I’m surrounded by, by the work that I’m given and the opportunities that we have.”

“It’s been really cool to play a character who is in the process of still growing, just like I am,” Lester said. “Ashlyn’s much younger than me and going through something totally different, but it was really cool to feel like I could nurture this character alongside myself, who I share similarities with. It’s really rewarding to feel growth within myself and within the person that I’m playing.”

To stay up to date on breaking TV news, sign up for ET’s daily newsletter.