“Twin Peaks” fans are abuzz over internet rumors that David Lynch is working on a secret follow-up to the Showtime limited series “Twin Peaks: The Return.”

As AV Club writer Britt Hayes reported in her own deep dive into the new “Twin Peaks” talk, the buzz started after the official Twitter account for the Hollywood Horror Museum posted a message stating, “Someone we know who is ‘in the know’ just let something very interesting slip about the future of ‘Twin Peaks.’ If it’s true, we’ll be squealing and giddy in 2020!” David Lynch’s daughter Jennifer is a board member of the museum, which is why the tweet gained traction online with “Twin Peaks” fans.

The museum’s post was followed by additional social media messages from “Twin Peaks” cast members Michael Horse (Deputy Hawk), who posted a photograph of his character being told to stay quiet, and Kyle MacLachlan. The latter has played protagonist Dale Cooper since “Twin Peaks” launched on ABC in 1990. MacLachlan posted a photo of himself on Twitter and wrote, “Love this dapper suit, but definitely thinking about…donuts this morning.” The “donuts this morning” line is a direct reference to Cooper.

Combine these posts with David Lynch tweeting last month about how he loves filming in King County, Washington (where “Twin Peaks” films) and “Twin Peaks” cinematographer posting photos earlier this year from where the show filmed, and fans are confident new “Twin Peaks” is on the way. Is it a book? Is it a new season? Is it a new film a la “Twin Peaks: Fire Walk With Me”? No one knows anything but fans are now anticipating something (let’s just pray it’s not a commercial).

Lynch has been hot and cold on a potential “Twin Peaks” Season 4 since “The Return” wrapped its run in September 2017. Showtime confirmed after the finale that it was not in conversations with Lynch for additional episodes.

Lynch appeared via video at the Serbia opening of his 2017 photo exhibition to say it was too early to discuss more “Twin Peaks,” but he teased that a new season would entirely depend on how long it takes to develop. Lynch spent four and a half years writing and directing “The Return.” 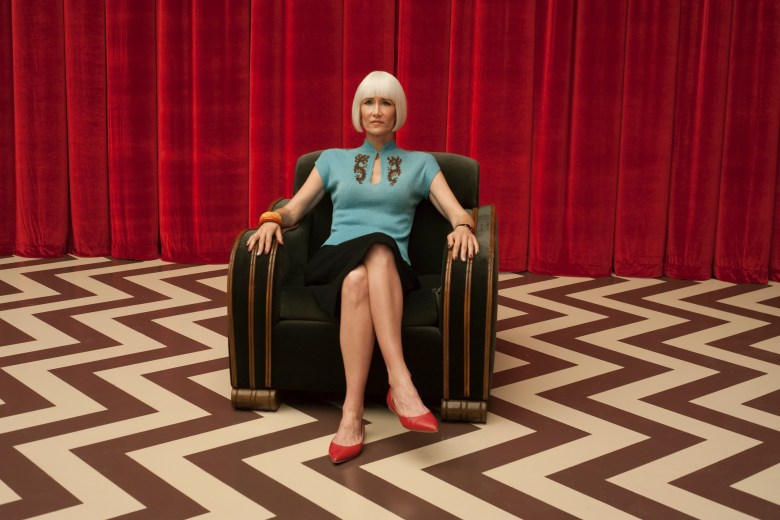 Laura Dern in a still from “Twin Peaks.”

While the chance to see David Lynch dive back into the world of “Twin Peaks” would be exciting (it’s hard to argue against any new Lynch film or television project), a more urgent question remains whether or not continuing the “Twin Peaks” narrative is necessary following “The Return” finale. There are no shortage of questions for Lynch and co-writer Mark Frost to answer: What happened to Audrey Horne after she woke up in some kind of institution? Where the hell did Cooper travel to? What is the malevolent force known as Judy? But “Twin Peaks” fans have never demanded answers (theorizing together is part of the obsession). More importantly, the destination Lynch brought viewers to by the end of Part 18 is too perfect, too haunting, and too unforgettably Lynch to go past.

“Twin Peaks” ended with Cooper seemingly traveling into an alternate dimension. Cooper first traveled back into the past to save Laura Palmer, but Judy seemingly felt Cooper’s disturbance and snapped him out of one timeline and put him into another where he was now an FBI Agent named Richard and Laura was a Texas waitress named Carrie Page. Richard and Carrie spent Part 18 traveling to her childhood home. The last shot of the series finds Carrie slowly remembering her other-timeline life as Laura. The wind calls out to her “Laura” in the voice of her mother Sarah Palmer (some fans think Judy is possessing Sarah throughout “The Return”), and Carrie lets out a horrific scream. The screen cuts to black. “Twin Peaks” is over, unless Lynch is now secretly making a follow-up.

Both times Lynch revived the franchise, first with “Fire Walk With Me” and then with “The Return,” he did so to provide a deeper understanding of the Laura Palmer mythos. “The Return” ends by suggesting Laura’s fate is on an infinite loop across multiple timelines. She’s always doomed, no matter what dimension. “Twin Peaks” has always been about Laura’s tragedy, and that’s where it fittingly ended. The optimism of the series rests in Cooper, who will continue trying to save Laura even if the triumph of evil is inevitable. The ending Lynch delivered defines the show’s grand statement on the nature of good vs. evil: It’s only when good stops trying to vanquish evil that the world falls apart. That message was rendered so powerfully and in such nightmarish fashion that to tell more of the “Twin Peaks” story seems unnecessary. “Twin Peaks” ended in a perfect thematic place, so do we really need to venture back? The answer isn’t so simple, but if David Lynch is buying the travel ticket it will be impossible to resist.