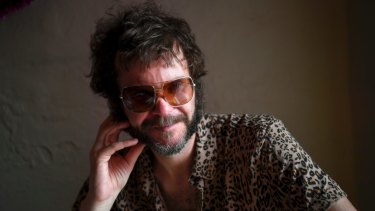 I'm a bit in love with Henry Wagons. When he invites me to "nestle" into his armpit at the beginning of his radio program Tower of Song, I'm there, man. I'm on a beanbag snuggling into the delightfully hairy Wagons as he spins "the finest in evocative songwriting" from folk and roots music to Americana, alt-country and bluesy rock. There is a lot to love about Wagons: put him on stage, solo or with his band Wagons, and he's a dynamo. Put him behind the microphone and he has the golden tonsils of John Laws and the wit of a stand-up comedian.

He is a master of metaphor; a former philosophy student and part-time English teacher who turned into a "mad professor of song", as the ABC calls him. His often hilarious interviews with fellow musicians are grounded in mutual respect.

His song curation is so skilful, there's never a dud. The catch? You have to like his sort of music, harvested from the vast rolling plains between hard rock and country. It could be straight-from-the-studio stuff from Australian singer-songwriter Freya Josephine Hollick, or old stuff from his idols: Leonard Cohen (whose song the show is named after), Johnny Cash and Elvis Presley. It could be Wilco's Jeff Tweedy, Kiwi crooner Marlon Williams, Melbourne folk outfit The Maes or shoe-gazer Kurt Vile.

Sometimes it feels quite American – Wagons is a lover of all things Nashville – and at other times, deeply Australian. Regardless, the music is what Wagons calls "the best in heavyweight songwriting": songs that say something; tunes with musical intellect and obvious songcraft. You can find full playlists on Double J's website and stream the week's episode – just in case, like me, you're reluctant to uncurl yourself from the glory of Wagons's metaphorical armpit.

To read more from Good Weekend magazine, visit our page at The Sydney Morning Herald, The Age and Brisbane Times.