It’s a fitting end for an extended awards season that so often saw “The Power of the Dog” director Jane Campion running off with award after award: The Kiwi filmmaker has won the Oscar for Best Director for her work on the lauded Western drama. The award makes Campion only the third woman to pick up the accolade; she follows Chloé Zhao’s win last year for her “Nomadland” and the first female winner, Kathryn Bigelow, who won for 2009’s “The Hurt Locker.” During an emotional speech, she thanked her cast, crew, family, and Netflix, along with the Academy for “the lifetime honor.”

Campion faced off against Kenneth Branagh, Ryuske Hamaguchi, Paul Thomas Anderson, and Steven Spielberg in the stacked category. Campion and Spielberg were previously nominated together in the category back in 1991 (Spielberg went on to win for his “Schindler’s List,” while Campion took home her first Oscar for Best Original Screenplay).

The filmmaker has long been viewed as the frontrunner in this category, and was also nominated for Best Adapted Screenplay (Sian Heder won for her “CODA”) and for Best Picture as a producer of “The Power of the Dog.” Another distinction for Campion: She’s only the second director to pick up Best Director for helming a Netflix production (the first was Alfonso Cuarón’s for “Roma”).

In the Academy Awards’ 94-year history, only seven women have ever been nominated for Best Director alongside Campion: Lina Wertmüller (1976′s “Seven Beauties”), Sofia Coppola (2003′s “Lost in Translation”), Bigelow (2009′s “The Hurt Locker”), Greta Gerwig (2017′s “Lady Bird”), Emerald Fennell (2020’s “Promising Young Woman”), and Zhao (2020’s “Nomadland”). When Campion was nominated in the category, she became the first female director to ever be nominated for Best Director twice.

Last year marked the first time the Academy handed out nominations to two women in the category, with Zhao going on to win both Best Director and Best Picture for her “Nomandland,” while Fennell took home the statuette for Best Original Screenplay.

Having written and directed seven features over two decades, from “Sweetie” in 1989 through “Bright Star” in 2009 — and winning the 1993 Palme d’Or for “The Piano” — the auteur made sure she did everything she could to ensure success for her eighth film. As she told IndieWire’s Anne Thompson on the occasion of the film’s Telluride premiere last fall, she couldn’t kick the, well, power of Thomas Savage’s original novel. 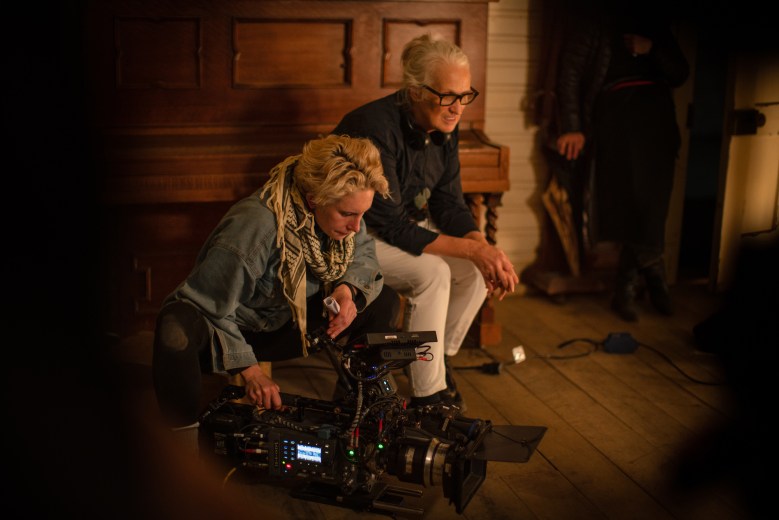 A fraught family drama set on a Montana cattle ranch in 1925, Hollywood sniffed around the project for years. Campion looked into the rights and learned that someone still held them. But she couldn’t shake images from the story, like a slim young man in a giant cowboy hat striding past a row of jeering cowhands screaming epithets at him.

“It just kept coming at me,” Campion told Thompson at Telluride. “I said, ‘Let’s find out who’s got [the rights]. Maybe they need a director.’” Then she met Canadian producer Roger Frappier (“Jesus of Montreal”), who was negotiating a directing deal for the property with someone else. But they were “book fans together,” she said, and by meeting’s end the project was hers.

The project was announced in May 2019, and after a few casting switcheroos, began filming in New Zealand in January 2020 in the Maniototo in Central Otago, with some scenes shot in the coastal Otago city of Dunedin and the town of Oamaru. Production on the film was halted in March 2020 due to the COVID-19 pandemic, but resumed in June 2020.

“The Power of the Dog” had its world premiere at the 78th Venice International Film Festival, where Campion won the Silver Lion for Best Direction. The Netflix feature went on to screen at TIFF, Telluride, and a range of other festivals. Over the past few months, the film has proven to be a juggernaut in the awards race, picking up wins from both awards bodies and critics groups over the course of a protract season.

It was named one of the best films of 2021 by the American Film Institute, won both Best Film and Best Director at the BAFTAs, and won Best Director at the DGA Awards. And while Campion’s directing and writing have been widely praised, the film’s performers have also been front and center this season, including multiple nominations for Oscar-nominated stars Benedict Cumberbatch, Kirsten Dunst (who lost out to “West Side Story” star Ariane DeBose in Best Supporting Actress), and Jesse Plemons and Kodi Smit-McPhee (who lost out to “CODA” breakout Troy Kotsur for Best Supporting Actor).

The film was also nominated for Best Sound, Best Original Score, Best Editing, Best Cinematography, and Best Production Design, though it did not win in any of those categories.