Comic-Con: Plus, Archie is starting a band, Veronica and Cheryl have a “Risky Business”-like storyline and there’s another musical 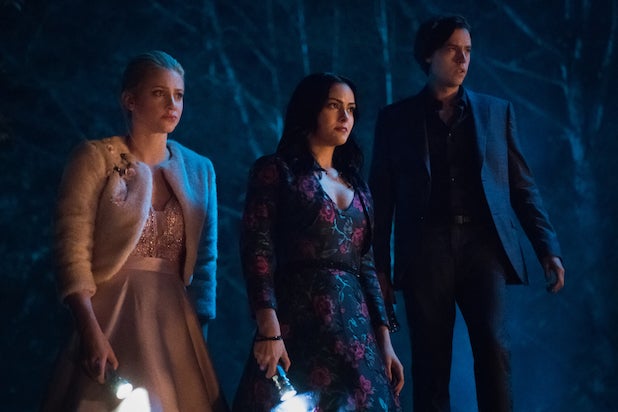 The “Riverdale” team dropped a heap of Season 4 news on fans during the show’s panel at San Diego Comic-Con on Sunday, revealing they’re finally doing a Halloween episode and Cole Sprouse’s Jughead is heading to prep school for senior year.

Plus, Bughead fans are going to be tested, as Betty (Lili Reinhart) is going to be dealing with Jughead’s move to a new school — and the fact that they just found out they share a half brother.

Oh, and Kevin is directing yet another musical and “hoping no one dies this time,” Aguirre-Sacasa said.

It was also revealed during the panel — which featured Aguirre-Sacasa and stars Apa, Reinhart, Mendes, Sprouse and Petsch — that Shannen Doherty will be guest starring on the season premiere, which is a tribute to the late Luke Perry and his character, Fred Andrews, and that Kerr Smith will play Riverdale High’s new principal, Mr. Honey.

“Riverdale” Season 4 premieres on Wednesday, October 9, at 8/7c on The CW.

TheWrap is in San Diego all week for Comic-Con 2019 — check out all of our ongoing coverage here.