We can’t enjoy Star Wars without allowing the parodies of the franchise to become an official part of the pop culture universe. We’ve seen plenty of them over the years, ranging from Mad Magazine to sketch comedy. Saturday Night Live aired a few Star Wars skits over the decades, though not a lot of them.

It’s even rarer when they can have one of the cast members participate in a sketch related to the new trilogy. Back in 2016, Adam Driver appeared as a guest on SNL and starred in a filmed Undercover Boss parody about Kylo Ren disguising himself as “Matt the Radar Technician.”

If you remember this, it’s since led to many fans adopting it as near-canon. Would there ever be a chance of it becoming a movie on its own? 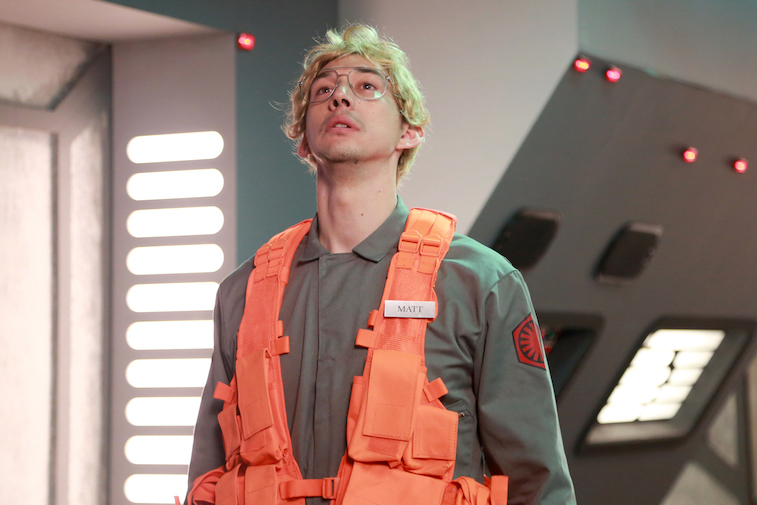 What if there really was some truth to Kylo Ren fooling his crew?

Go back and take a look at some of the outtakes of that little Matt the Radar Technician film and see how hilarious it still is. Seeing Driver break up while filming it is more entertaining than the material itself, though it was one of the most brilliant parodies written on the show in a while.

What made it so good is they made it look believable. We even get a chance to see Driver in the Kylo Ren outfit for a few seconds, chillingly setting up the sketch premise.

As hilarious as it is in how they play it straight, we have to imagine Kylo Ren really doing something like this to gauge how the crew feels about his leadership. You have to think Darth Vader would have done the same thing had he been able to go under disguise more conveniently.

Because we know Kylo is more insidious and calculated in his dark side ways, it’s made some Star Wars fans wish for a Matt the Radar Technician movie.

There’s clearly no chance for a movie, but maybe additional short material

Despite a huge fan base for this sketch and 29 million views of it on YouTube, it’s doubtful anyone would have the ability to persuade Adam Driver to make a movie with this scenario. Unless we’re shocked out of our gourd in it being included briefly in The Rise of Skywalker, which would be an out and out miracle.

Since the sketch, Matt the Radar Technician has shown up in a couple of Star Wars video games. Other than this, there hasn’t been anything more. Don’t necessarily count out something coming up again, maybe a comedy short film, like on Funny or Die.

With Adam Driver likely wrapping up his time as Kylo Ren at the end of The Rise of Skywalker, it may free him up to do more with the Kylo/Matt alter ego.

On the other hand, if Driver wins an Oscar for Marriage Story in early 2020, maybe he’d be a little too above ever considering this character again.

It’s obvious Adam Driver is an overly intense actor who finds his best groove in heavy dramas. Many fans would probably agree there could have been a few lighter moments for Kylo Ren in the current Star Wars trilogy. The writers for the movies didn’t really allow any moments like that, making the Matt sketch such a keeper.

There’s also a haunting edge to the Matt sketch in seeing the Kylo character going undercover. Thanks to knowing what he’s truly capable of, it gives an edge to the whole thing while still being uproarious in its execution.

Even if Driver becomes the new Robert De Niro of his generation, let’s hope he returns to Matt the Technician in some form. A short format is the better bet, which could even happen on SNL again if he ever returns as host.