Richard Madeley and Susanna Reid were left a little stunned on Good Morning Britain by Jenny Eclair, after the comedian cracked a rather NSFW joke on the morning show.

It was pre-9am and clearly Jenny was on a roll.

The comedian, 62, spoke all about her comedy tour, where she reflects on turning 60 and declares it ‘a new decade of decrepitude’.

Richard Madeley brought in some, erm, useful information, as he informed her: ‘The most favoured leisure activity among the over-65s, in a poll, is sex.’

‘Oh really?’ Jenny responded. ‘I’ll have to wait till I’m 65 then and next time I’m here I’ll be covered in carpet burns.’

Richard and Susanna were left in stitches, while even the crew could be heard laughing in the background.

‘I’m far too young for sex, Richard,’ Jenny continued. ‘So ask me back in three years’ time and I’ll come back in suspenders.’ 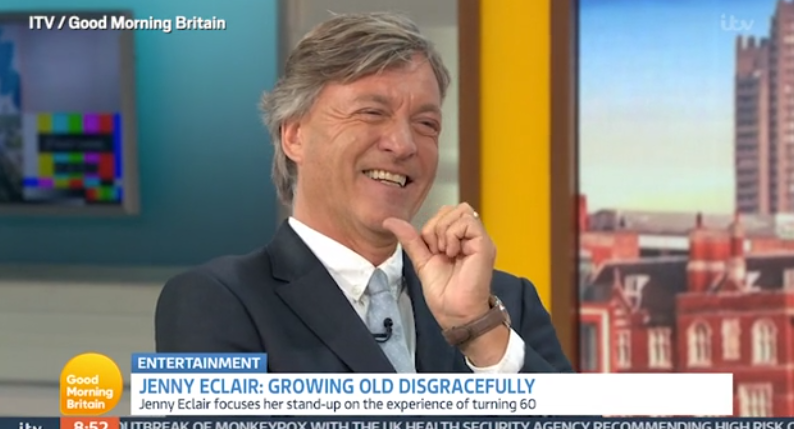 Jenny is no stranger to stripping off, previously telling Metro.co.uk about the time she was a life drawing model, as she hosted BBC’s Drawers Off.

‘I’ve done quite a lot of life-drawing classes and with most of them it’s full nudity. But on television you have to cut your cloth to fit your whatevers. I’ve been both sides of the canvas – there’s nothing here I haven’t done,’ she shared.

Asked if she would be up for giving it another go, she responded: ‘It wouldn’t bother me in the slightest. I live in a glass house on a bus route and if people don’t want to see me walk naked across the landing then it’s up to them to shut their eyes.

‘Life is too short to worry about people seeing your bum when you’re getting changed on the beach.’