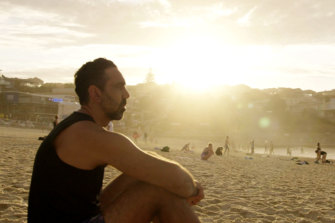 Adam Goodes in a reflective moment in The Australian Dream. Credit:Madman

I have terra nullius memories: poverty and restlessness; being taunted as a black c…t at football training; trying to scrub the colour off my skin; reciting the names of white explorers in class; shrinking at the mention of the poor Aborigines; the schoolyard pledge of allegiance to Queen, God and flag.

Goodes has terra nullius memories: moving from town to town; always being "that black kid"; estranged from his culture and his people; his mother stolen from her parents; trying to fit in.

For Indigenous people there are too many terra nullius memories. This is what happens when a land is deemed "empty". When tens of thousands of years of culture, civilisation, art, politics, economy, law and lore are denied. When rights are extinguished.

Terra nullius is what haunts us. It's what terrifies and fascinates us about the outback, the "never never", beyond the black stump. People die out there; they vanish. It is baked into our folklore; it is in our films like Picnic at Hanging Rock. It is what the sociologist Elspeth Tilley calls the White Vanishing.

To be seen at all, Indigenous people need to perform; to explain themselves, to talk back to white Australia; to answer questions, to justify. Too often defensive. Are you really Aboriginal? How Aboriginal are you? You don't look Aboriginal. But you're not like the others.

Our law has done away with terra nullius, the Mabo decision saw to that. Native title exists as recognition that the First Nations' claim to this land endures. But even then, Indigenous people must prove themselves. They must show that their rights have not been washed away on the tides of history.

Anthropologist Elizabeth Povinelli says this is the cunning of recognition, Indigenous people trapped in the "throes of contestation and opposition". Indigenous people know this well; it is the imperative to always explain, to defend their histories and identities. Now, post-Mabo, to probe again their uninterrupted continuous relationship with their own country. It is a game where the rules are set by others. As Povinelli says, Indigenous people are asked to defend "the impossible object of an authentic identity".

When a young girl in a crowd called Goodes an “ape”, he heard the echo of all of this history. He heard his mother's cries, he heard people in chains, he heard the wailing of too many funerals and the sound of too many closing jail cells. He has been on a journey to understand our history, a journey into the heart of terra nullius.

When Goodes heard the relentless boos of football crowds, week after week, he knew what he was hearing; it was the sound of terra nullius.

The Australian Dream is about the dignity and defiance of Goodes. It is about an Indigenous man, an Australian man and his dream for his country. A place where lives need not be framed by emptiness, but recognition and respect. His dream is a for a place reconciled.

The Australian Dream is about Goodes's voice. The film also grew out of a speech that I had made, where I spoke my family's truth about life in the lucky country – a darker truth where the dream of Australia for too many lies just out of reach.

But in a film of many voices it is a moment of silence that speaks still most powerfully to me. Twenty years before Goodes, another black footballer, Nicky Winmar, stood tall against racism. In an image now immortalised in Australian sport, Winmar lifted his jumper and pointed to his black skin. This is who I am he said, I am here, I have always been here. We have always been here.

In that moment, Winmar, reminded us what we have always known. Terra nullius is a lie.

The Australian Dream premiered on Thursday night at the Melbourne Film Festival. It will open in cinemas from August 22.

Stan Grant is professor of Global Affairs at Griffith University. He is a Wiradjuri and Kamilaroi man.