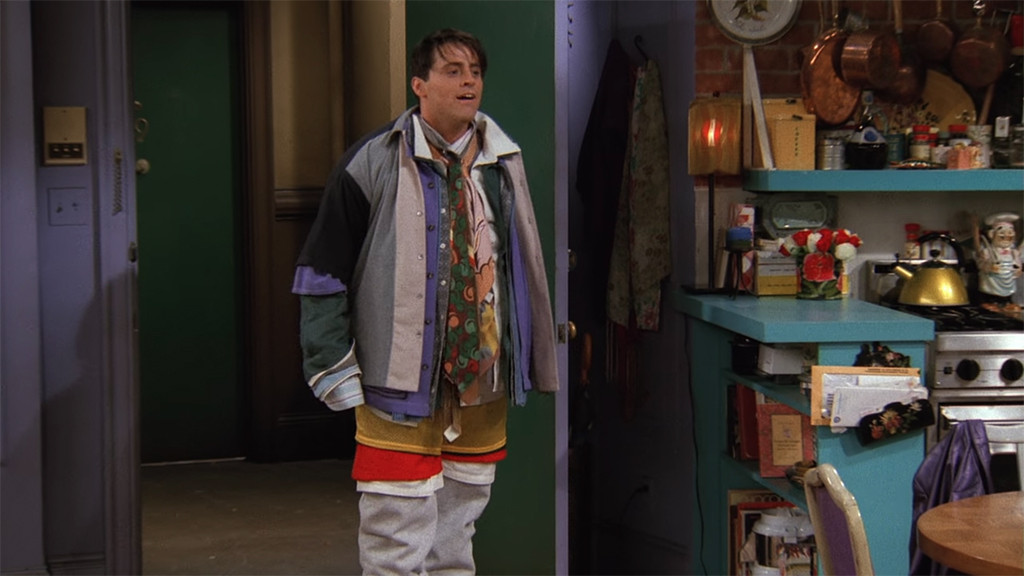 Friends is celebrating its 25th anniversary this weekend (Sunday, the 22nd to be exact), and you know what that means: endless lists of the best episodes of the iconic series.

We had to throw in our own two cents, and found it to be a harder task than we originally thought it would be, even with 236 episodes to choose from. It turned out to be fairly easy to come up with our top five, but filling out the next 20 was the tough part. Do episodes deserve a spot in the top just because they include iconic moments, or does the entire episode have to be perfect? And do we have to include certain episodes featuring a certain couple, even though in hindsight we can’t stand them?

These are the questions we asked ourselves as we carefully curated this list of episodes we will never skip upon rewatch, especially as we’re finding in these later years that we skip a whole lot more episodes than we used to in an effort to escape some of the show’s more troubling moments. (It doesn’t matter if they were on a break, y’all.)

Here, presented just for you, is our list of the 25 best Friends episodes, in order from worst best to best best. Please do not @ us.

Rachel panics over the fact that she’s turning 30 and her life plan is behind schedule while we learn what happened when the rest of the group turned the big 3-0. It makes absolutely 0 sense that Rachel is turning 30 in this 2001 episode since she was apparently 28 in 1996, but that just makes this all the better, somehow. (She was also later pregnant for an entire year so…shrug emoji.) 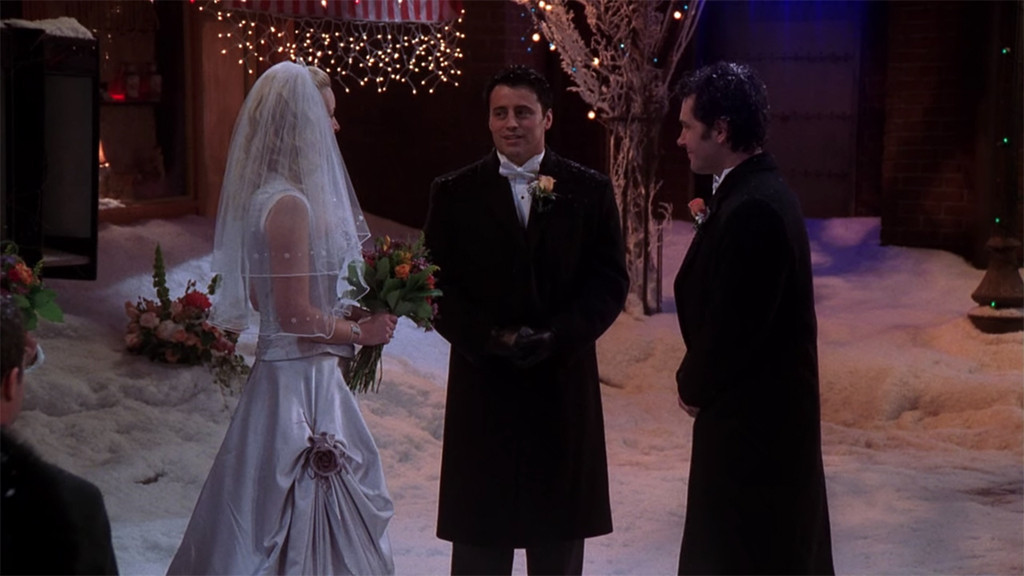 Monica went insane planning Phoebe’s wedding while New York ended up in a blizzard, but the wedding turned out beautifully, especially for one of the show’s most often underserved characters. Phoebe is the GOAT and she deserved a wedding as beautiful as this to a man as great as Mike “Crap Bag” Hannigan.

Not only does this episode feature Joey learning to play an older woman when Dr. Drake Ramoray gets a brain transplant from Susan Sarandon, but it also features the scene that led to the best bloopers of all time. Ross wants to surprise Chandler and Monica by playing bagpipes at their wedding, so he tries to play the song “Celebration,” and asks them to sing along. Instead of singing, Phoebe mimics the bagpipes. This scene brings actual tears of laughter to our eyes and you cannot convince us it’s one of the greatest pieces of comedy of all time because of Lisa Kudrow.

Joey and Rachel got together! Ross and Charlie got together! Mike proposed to Phoebe! Monica’s hair went crazy! Of course the show never fully committed to our dream of Joey and Rachel making it work, but for one brief moment in Barbados, our Ross-hating dreams were coming true. 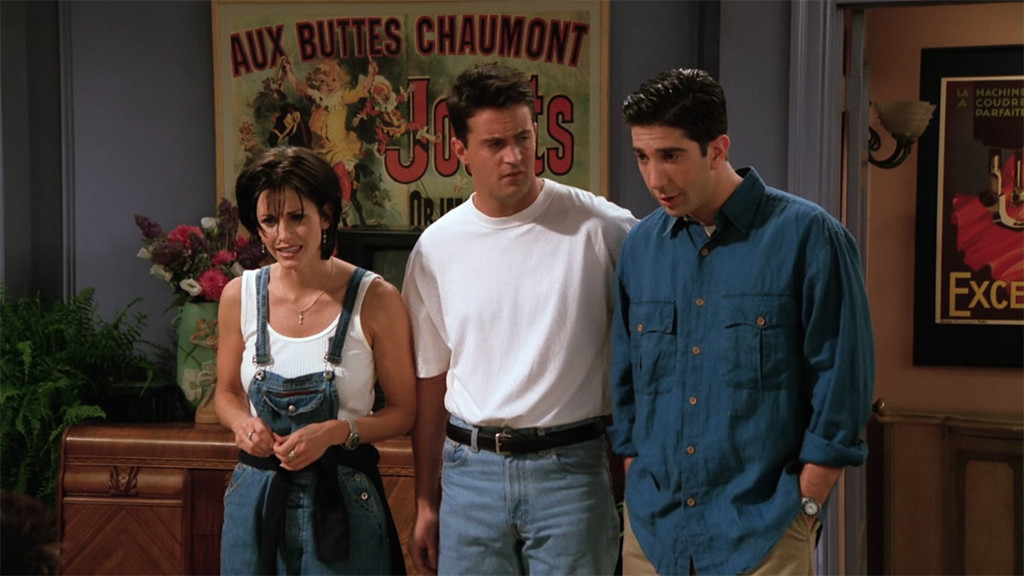 20. The One With Five Steaks and an Eggplant, Season 2, Episode 5

One of the most relatable episodes of the entire series. Phoebe, Joey, and Rachel struggle to explain to their richer friends that they can’t afford to split the bill at fancy restaurants or pay for expensive birthday presents, and it not only tears the group apart, but the fight ends up losing Monica her well-paying job and feels more real than maybe anything else this show did.

We struggled to choose between “The One With the Red Sweater” and “The One Where Rachel Tells Ross,” but we ended up settling here on the one where we learn what led to Rachel getting pregnant and discover the magic of Ken Adams’ sex story.

The true tale of how Monica and Chandler got together is a sad one, as it was actually Joey that Monica was looking for, but what a happy ending it had. Plus, Rachel teaches Ben a bunch of pranks and it’s very good. 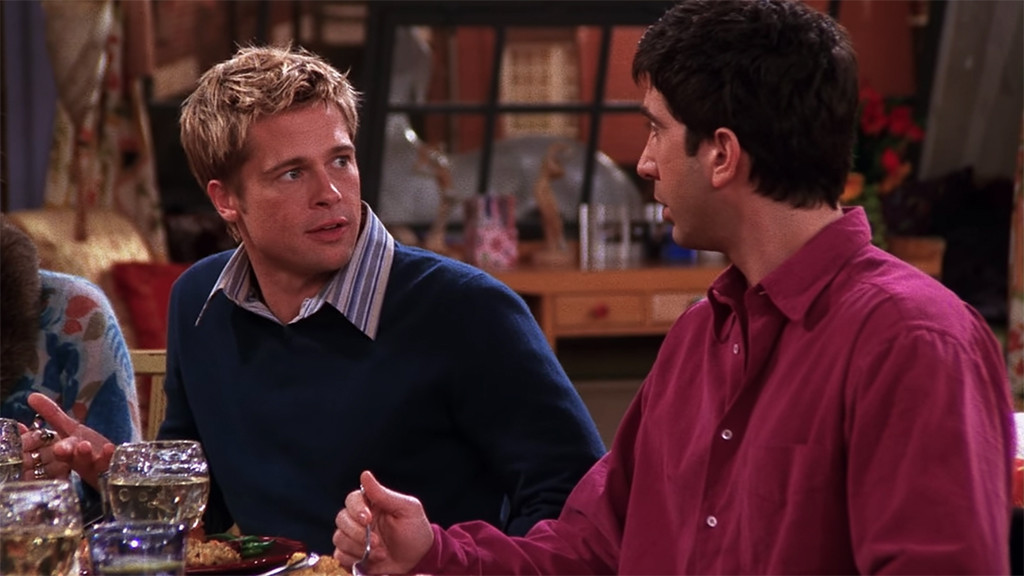 All we really have to do is remind you that this episode guest starred Jennifer Aniston’s then husband Brad Pitt, but we’ll go even further to explain that Brad Pitt played a man named Will who hated Rachel’s guts and started a club with Ross called the I Hate Rachel Green Club, and is dismayed to find out that Ross and Rachel then dated and now she’s pregnant with his baby. Plus Joey tries to eat an entire turkey. What’s not to love?

It took almost the entire series for Phoebe to find a serious relationship, but boy did she find her match in Mike Hannigan (Paul Rudd). This was never more clear than when she discovered she could change her name to anything, not just to Phoebe Hannigan. The name she chose was, of course, Princess Consuela Bananahammock, so Mike changed his to Crap Bag, and Phoebe realized her choice was maybe not the most practical. Elsewhere, Rachel was getting offered her dream job, and Monica and Chandler were shopping for houses while Joey was preparing to let them go, so it’s just an episode of growth for everybody. 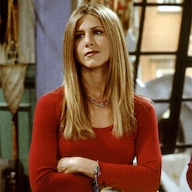 Chandler naturally had a little panic attack and took off ahead of the wedding, but all eventually went well. Monica would be devastated to know that Rachel’s secret pregnancy really did steal her wedding thunder, though.

This one is particularly good because it gives us a duo the show has never played much with before: Chandler and Rachel! Sure, they’re stealing cheesecakes and that’s morally bad, but they’re having such a good time doing it, and any time the show gives us a surprising pair is a treat that’s even better than cake on the floor.

Thanks to Janice wondering who in the group has *almost* had sex, we discover that Ross and Phoebe once kissed, Rachel and Chandler once thought about it, and Joey and Monica had a little misunderstanding. Oh and Central Perk used to be a bar! Very fun, but also very unsatisfying because no one actually does hook up. Imagine what we could have had with Ross and Phoebe!

While Chandler desperately tried to get Joey to accept some money from him through a purely fictional game called Cups, Rachel came to terms with the fact that she had to move out, and Monica had to live with a boy, while Phoebe just tried to keep the peace. Focusing on the friendships among the three women wasn’t something the show did quite enough, but when it did, it was gold.

10. The One With the Holiday Armadillo, Season 7, Episode 10

Ross desperately tries to get Ben excited for Hanukkah, but Ben just wants Santa Claus. When Ross can’t be Santa Claus, he settles for…the Holiday Armadillo! Santa then shows up anyway, along with Superman, and it’s a beautiful holiday tradition not enough of us have adopted. Phoebe also spends the episode giving Joey terrible gifts to make Rachel want to move out of his apartment, but it turns out Rachel loves drums and tarantulas, and would also love to live with Phoebe again. Just warm fuzzy feelings all around.

While Ross is busy trying to prove he’s a tough guy in front of Emily and her British friends, Monica goes insane over a switch that appears to do nothing, and Chandler tries and fails to break up with Janice so hard that he ends up having to buy a thousand dollar ticket to Yemen, where his address is 15 Yemen Road, Yemen. We’ve never found out what happened to Chandler in Yemen, but at least he eventually learned how to communicate with women.

For the Ross and Rachel fans (wherever you may be), this one is a standout. A video from prom night reveals that Ross was ready to take Rachel to prom when she got stood up, and it brings the two back together after the whole Julie/list fiasco. Because there’s nothing more romantic than never getting over an unreciprocated crush. 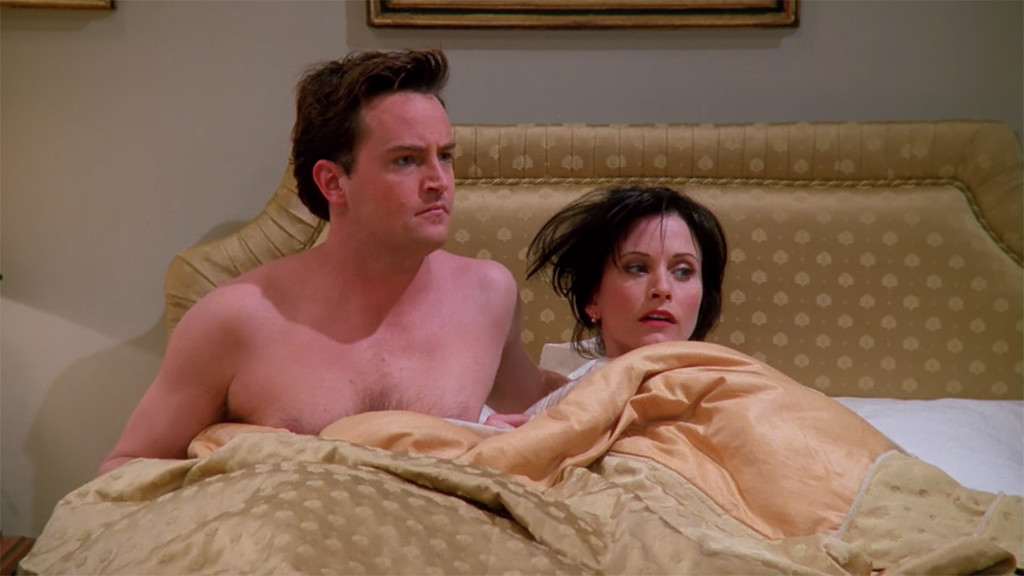 Say what you will about the Ross and Emily storyline (and we will say it was horribly annoying), you can’t skip the episode(s) that ever so carefully brought Monica and Chandler to a place where it made perfect sense for them to hook up in a hotel room in London. The delighted screams from the audience when Monica pops up from under those covers is a sound that still gives us goosebumps.

This episode was basically an hour long drama instead of a comedy. Chandler worked too hard to make Monica think he wasn’t ready for marriage, which brought Richard momentarily back into the picture, and left Chandler racing back to the apartment thinking Monica had taken off. In reality, she had filled the apartment with candles and was ready to propose to him. They sort of ended up doing it together, and oh boy we’re crying just thinking about it. 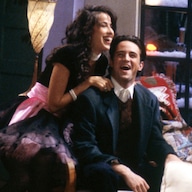 What Makes Janice’s Laugh on Friends So Memorable? Maggie Wheeler Has a Theory

This episode is more jam-packed than the one with all the jam. We learn that the Gellers hate Chandler because they thought he was smoking weed in their house, but it was actually Ross. Monica broke the porch swing! Ross stole the Playboys! Phoebe loves Jacques Cousteau! Rachel wasn’t supposed to put beef in the trifle! Just a joyful Thanksgiving mess. 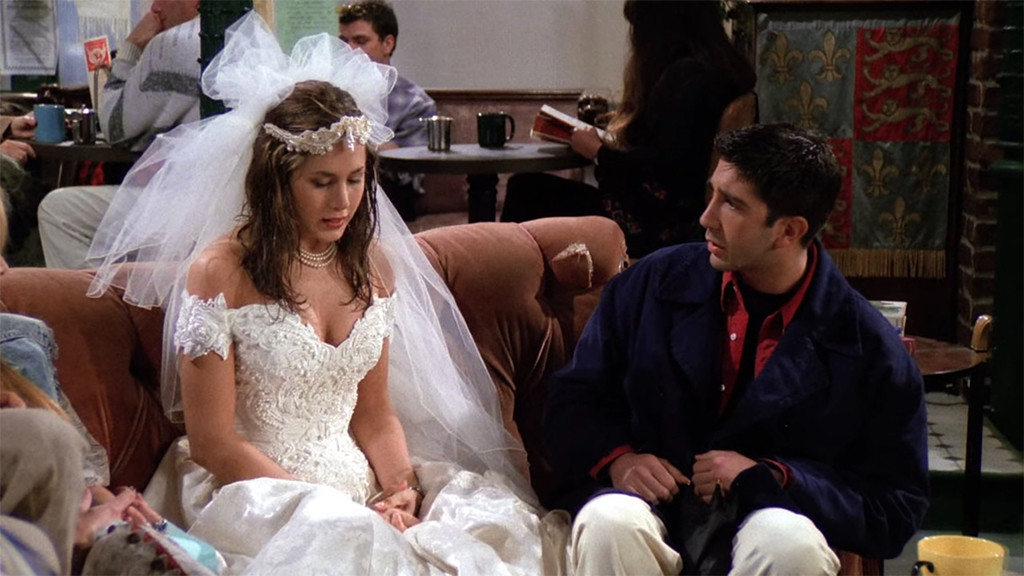 The one that started it all. You might be surprised to remember just how many classic Friends jokes are stuffed into this one really beautiful episode, which gives us a lengthy taste of a typical Central Perk hangout before throwing runaway bride Rachel into the mix and changing the whole group for the better. Welcome to the real world! It sucks—you’re gonna love it.

The bottle episode, filmed in real time, is like a perfect little play. Ross panics over how no one’s ready for the gala they have to leave for in 20 minutes, causing a fight with Rachel while Monica spins out of control over Richard, Phoebe gets the hummus, and Joey and Chandler lose it over a chair. Joey puts on all of Chandler’s clothes and gives us this iconic line: Could I BE wearing any more clothes? Ross is also mean, but what’s new there?

Perhaps better known as the One With the Quiz. While Phoebe’s trying to get pregnant with her brother’s baby, the rest of the gang is divided into boys vs. girls to figure out who knows who best. It was neck and neck until Chandler’s job defeated Monica and Rachel. Unfortunately, “transponster” is not even a word, and the girls lost their apartment over it. We, meanwhile, gained some hilarious new insight into our favorite friends, including the name “Miss Chanandler Bong.”

1. The One Where Everybody Finds Out, Season 5, Episode 14

The best thing this show ever did was hook Monica and Chandler up and have them date in secret, and that all culminated in this, the best episode of the series, which pits Monica and Chandler against Phoebe and Rachel (with Joey in the middle) in a battle for who can hold out on the secret the longest. It’s a perfect 20 minutes of escalation, and Chandler’s “I love you” is the cherry on top. They don’t know we know they know we know!

What we do know is that for now, you can still watch every season of Friends on Netflix.