Just days after her second-place win on The Voice Season 21, Wendy Moten underwent surgery to repair severe injuries. Earlier in the season, the singer shocked fans when she fell on The Voice stage after a performance. She got back on her feet but later revealed she broke her elbow and wrist. Now, after finishing out the season and successfully completing her surgery, Moten is giving fans updates on her recovery.

During the Top 11 eliminations show on Nov. 23, Moten performed alongside teammates Lana Scott and Paris Winningham and their coach, Blake Shelton. As the group exited the stage after their rendition of “Sugar Pie Honey Bunch,” Moten tripped over a piece of equipment and hit a hard landing. The room fell silent while Moten’s teammates helped her to her feet.

Moten later returned to the stage to assure fans that she was OK and in good spirits. However, the following week, viewers learned that she sustained much more serious injuries. The former backup singer revealed that she visited the hospital after the live show ended to receive casts on both arms.

Still, Moten took to the stage once more with incredible determination, powering through a stoic rendition of Dolly Parton’s “Jolene.” She left Shelton and the other coaches speechless with her bravery and strength.

Despite her injuries, Moten continued to deliver show-stopping performances week after week, making it to the finale. Audience votes made her The Voice Season 21’s runner-up behind Team Kelly Clarkson’s Girl Named Tom.

After the season 21 finale, Moten confessed to People that her broken elbow was serious enough to need surgery. The singer said she was “amazed” that she could continue performing for several weeks after her fall.

“My elbow is jacked up,” Moten explained. “It’s shattered. It’s no good. I have to have surgery to put metal plates and bolts and things.”

Moten also said she planned to have the surgery in Nashville so that she could be close to her family in case of an emergency.

“I’ve been in talks with the doctor at Vanderbilt, and they have everything. They got two dates set up for me: they got an ‘if I win’ date for surgery, and then ‘if I don’t win,’ they got a date for that surgery,” she said at the time. “I’ll be having surgery coming up in a few days or next week.”

Then, on Friday, Dec. 17, Moten went live on Instagram, revealing she was on her way to the surgery center.

“The idea is to keep going,” she said. “December, January, February, everything shuts down. I’ll recuperate.” 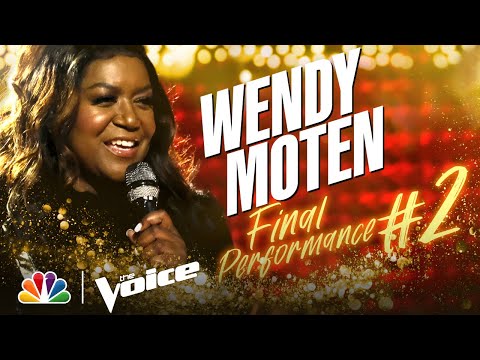 It seems Moten’s surgery went well, as the singer revealed via another Instagram update that she’s “counting down the days” until she’s fully recovered to start performing and recording music again.

“I’ll most definitely keep you all posted, and I hope there’s something in the works with @blakeshelton too !!!
Fingers crossed,” she wrote in the caption.

If Moten’s run on The Voice is any indication, she’ll have no trouble getting back on her feet after some time off.

Stay tuned to Showbiz Cheat Sheet for more updates on The Voice.