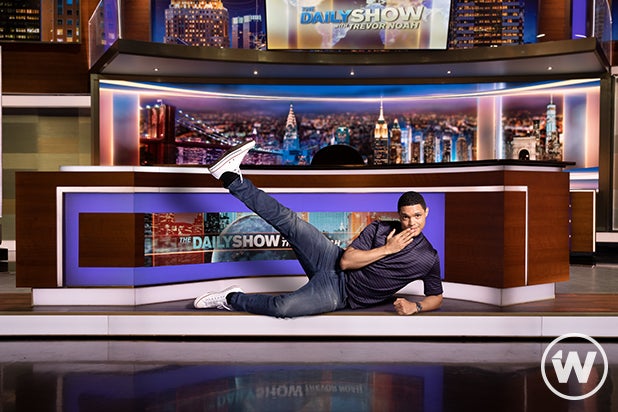 Photo for TheWrap by HollenderX2

An edited version of this story about Trevor Noah and “The Daily Show” first appeared in the Down to the Wire issue of TheWrap’s Emmy magazine.

For the first two years after he took over “The Daily Show” from Jon Stewart, Trevor Noah wasn’t nominated for Emmys.

But Television Academy voters recognized his show last year and again this year, even after he ruffled a few feathers with billboards suggesting a vote for another show would be tantamount to Oscar voters’ choice of the much-derided “Green Book” for Best Picture.

Do the advantages outweigh the disadvantages, or vice versa?
From the time I started hosting “The Daily Show,” Donald Trump has been a big part of America’s politics, so I don’t have another point of reference. One of the upsides is that he’s gotten more people engaged in and talking about politics than ever before, which is always a good thing. The downside is that he does so much that people move from one scandal or issue to the next without really digging beneath the surface. So there’s more outrage and engagement but less nuance and closure.

Does it present a challenge to you to keep up with the escalating craziness?
I’ll be honest, I see the challenge as part of my job. If it was easy, then everyone would be able to do it. If anything, I enjoy working with craziness because then all I need to do is find the pattern and underlying story in order to build the show.

How hard do you try to find non-Trump topics to cover on the show, and how difficult is it to achieve that?
We used to try really hard, but now it’s become second nature. I love covering this presidency, but now we also get to enjoy covering a wide range of topics such as college debt, recycling, police stories, Silicon Valley, Brexit, etc. Contrary to popular belief, Donald Trump isn’t the only issue facing the world right now.

You took some flak for Emmy billboards saying “Don’t ‘Green Book’ This One, Guys.” Did they accomplish what you wanted?
I love it when I hear phrases like “took some flak” or “drew some criticism” because the truth is at the end of the day I’m making a comedy show, and the job of a comedian is to shake things up. When there are so many real things happening in the world that actually matter, I find it odd that people are outraged about a joke told by a comedy show.

How have your ideas of what you want to achieve with the show changed since you took over from Jon Stewart?
That’s a tough question to answer, but I think my idea of the show is constantly evolving. When I first started hosting, my only goal was to not make Jon and Comedy Central look like idiots for putting me in the seat. Then over time, the goal shifted to growing the show and expanding how we create.

And now my main focus is to try and create a space where I can be honest with my audience about what I’m seeing and how it’s affecting the world. It’s always a work in progress, and I love every moment.

Read more from the Down to the Wire issue of TheWrap’s Emmy magazine.