Before you run to theaters to see Hustlers next week, you should know two things: 1) The movie, starring Jennifer Lopez, Cardi B, Constance Wu, and every other person you care about RN, is just as good as you hope it will be. 2) There’s a scene where Cardi B wears just nipple pasties and is, in a word, iconic.

The movie follows a group of New York City strippers who con wealthy Wall Street types out of hundreds of thousands of dollars during the recession. It’s basically a time capsule back to a time when Perez Hilton was king and you took all your style inspiration from Paris Hilton and Nicole Richie.

Mitchell Travers, the costume designer for the film, broke down some of its most soon-to-be-iconic looks.

What kind of research did you do before filming?

I went to strip clubs all over the place. I went to strip clubs in New York, New Jersey. And if you knew me, you would know that I am not the type of person to traditionally be in the audience of a strip club, but it would be me, tipping these girls in the champagne room and being like, ‘Okay, so let’s talk, Where do you get your shoes? What outfits work for you? Are you going into character, or is this an extension of yourself?’

And I would just have conversations with these women. Sometimes they would be really skeptical of me and others were really, really sweet. They were like, ‘Listen, it’s your time, so if you’re willing to pay me for mine, it’s whatever you want to do.’

What was it like working with Cardi B, who was an actual stripper?

I filled a trailer with a range of the most exotic things you could imagine a stripper wearing, and then things that were just really humble and true to life. Because this was her first foray into film, I wasn’t sure where her comfort level would be.

She came in, she had no ego. She really wanted to be a part of the film, didn’t want to be separate from the film. So she wanted to understand, ‘Are we playing this for real? Or is it glamorous? What’s the story?’ And I said, the girls are really going for reality. And she said, ‘Then sign me up. Let’s go. Show me the most authentic thing in this room.’ 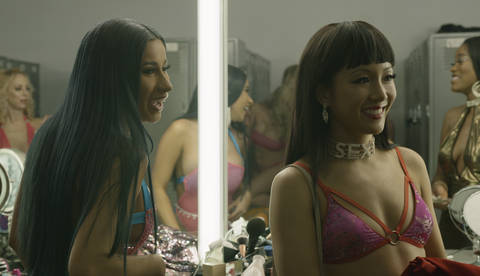 No spoilers, but there’s one scene in particular where she’s wearing nothing but pasties on top. Whose idea was that?

Mine. It was three in the morning, Cardi and I are in the trailer. We’re like, ‘Okay, we have one more look, what do we want to do?’ And I pulled out this corset and I was like, ‘I know that this is a risk.’ And she’s like, ‘Let’s go.’

I’m lacing up the corset in the back and I pull out this little pastie buffet. And there I was, at three in the morning, with some double stick tape and Cardi.

#HustlersMovie – in theaters September 13. Get tickets now. (Link in bio)

#HustlersMovie – in theaters September 13. Get tickets now. (Link in bio)

Obviously there are a lot of G-strings in this movie. Do you have any important tips for avoiding wedgies?

No, I think the wedgie is the goal in this situation.

What about the six-inch heels? Any hacks for wearing those for hours on end?

They’re mostly made out of plastic, so I would have the girls put socks on and put their feet in and just heat up the plastic with a blow dryer so that it perfectly molded to their feet. And then you let it cool a little bit and put it back on and it would really hug the foot well.

Jennifer does her opening number in this incredible silver sequin look. What went into creating that? 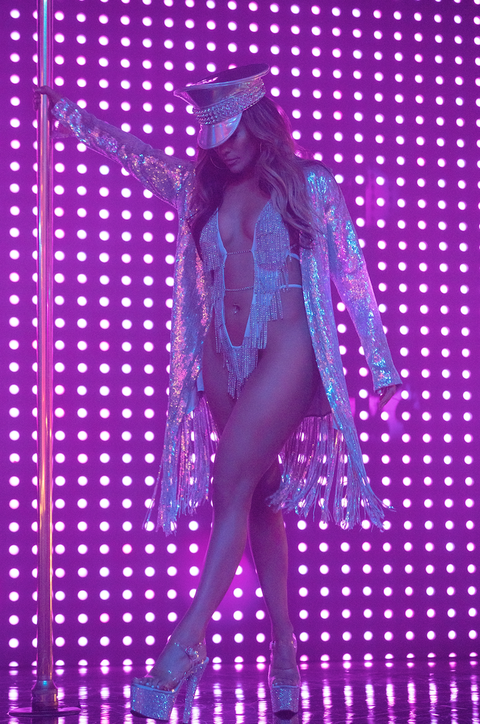 I had a lot of conversations with Jennifer about that costume and how she wanted to feel in that scene. She was really digging into this character, she was really unafraid to show her body in a way that we hadn’t really seen before. And she was in such athletic shape.

So I designed this body suit. I wanted people to wonder, ‘How is this thing staying on?’

There’s a surprising lack of nudity in Hustlers considering it’s a movie about strippers. Why is that?

I was always very interested in the feeling of nudity without the reality of nudity. The anticipation is way more exciting and way more a part of stripping than the actual reveal. The reveal is just done at the end because you’ve earned it because you’ve watched this performer. The true seduction is not nudity, it’s the engagement with the audience and it is the withholding of parts of their body.

What’s your favorite memory with the cast?

I was so impressed by Constance because she came in for her first fitting and she was ready to work. Like, she brought in her own pair of six-inch heels. And she had obviously done a lot of work and a lot of thinking about the film. And that moment really stood out to me.