From ‘Friends’ marathons to ‘The Grinch’ and beyond 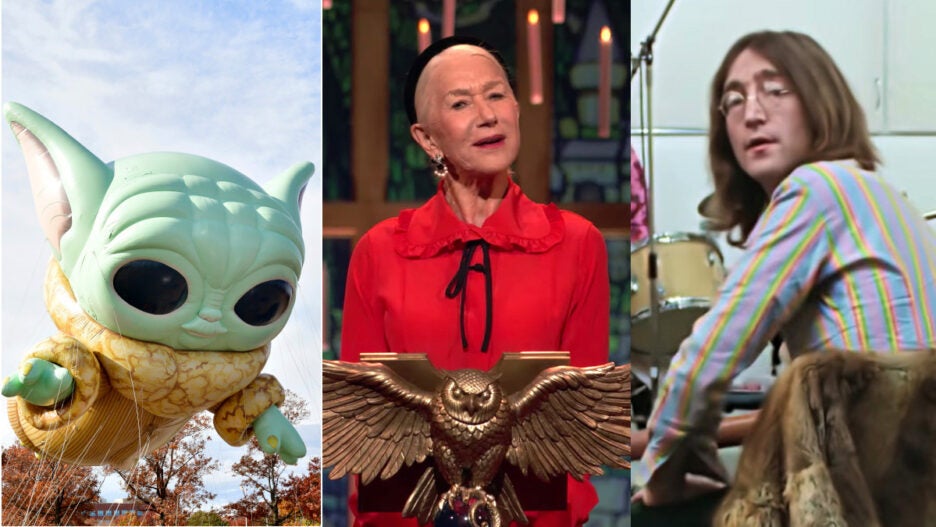 Thanksgiving weekend finds most people off of work or out of school, which means there’s plenty of downtime to… watch TV. Of course, curating your TV watchlist has never been more difficult, with more hours of great programming than time in the day. But if you’re wondering what’s worth watching on TV or streaming over Thanksgiving weekend, we’ve got you covered.

Below, we run down the live events, movie and TV marathons, and new movies and TV shows all airing over the long four-day weekend. Check out our guide to what to watch on Thanksgiving weekend below.

The annual Macy’s Thanksgiving Day Parade will air from 9am to 12pm in all time zones on Thursday, Nov. 25 on NBC and Telemundo. But if you’ve cut the cord, you can watch Baby Yoda fly through Manhattan on Peacock starting at 9am local time.

Following the Macy’s parade, the 2021 National Dog Show will air Nov. 25 at 12pm Local time until 2pm on NBC. It can also be streamed on NBCSports.com or the NBC Sports app.

If you need something to put on while the turkey’s in the oven, TBS will be airing all the “Friends” Thanksgiving episodes starting at 1pm ET on Nov. 25.

If a magical Thanksgiving is more your speed, USA will be airing all the “Harry Potter” movies in marathon fashion on Thursday and Friday.

The latest Marvel Disney+ series “Hawkeye” actually launches ahead of the weekend, on Wednesday, with the first two nearly-hourlong episodes dropping on Disney+. The Christmas-set series stars Jeremy Renner and Hailee Steinfeld and makes for swell family viewing if yours is an MCU-loving family.

Kick off the Christmas season in style with the iconic “Home Alone,” airing on Freeform at 6pm ET on Thursday.

“The Wizard of Oz”

Want something a bit more old school? “The Wizard of Oz” airs on TBS Thursday at 7:45pm ET.

“The Beatles: Get Back”

Director Peter Jackson’s three-part documentary series “The Beatles: Get Back” begins with Part 1 on Thursday, Nov. 25 on Disney+. Part 2 premieres Friday and Part 3 on Saturday, as the series features never-before-seen footage of The Beatles during their 1969 writing and rehearsal sessions, newly restored.

“Santa Claus Is Comin’ to Town”

The broadcast networks will also be kicking off Christmas with animated classics. The Rankin/Bass “Santa Claus Is Comin’ to Town” airs on Friday, Nov. 26 at 8pm ET on ABC.

“How the Grinch Stole Christmas”

Over on NBC at 8pm ET on Friday, the original “How the Grinch Stole Christmas” animated special will be airing.

“A Castle for Christmas”

Wanna watch a Netflix original Christmas movie starring Cary Elwes and Brooke Shields about an author who falls in love with a castle (and the duke who owns it)? Of course you do. “A Castle for Christmas” is streaming on Netflix starting Friday.

On Saturday, Nov. 27, TBS will be airing “National Lampoon’s Christmas Vacation” for 24 hours straight. The festivities begin bright and early at 6am ET on Saturday.

Get into the Disney spirit with “Wonderful World of Disney: Magical Holiday Celebration” at 7pm ET on ABC Sunday, Nov. 28.

“Succession,” “Insecure” and “Curb Your Enthusiasm”

HBO isn’t taking the holiday of for new episodes of its currently running Sunday night series – catch new installments of “Succession,” “Insecure” and “Curb Your Enthusiasm” on Sunday night.