There may be no crying in baseball, but there were tears all throughout the world premiere of Prime Video’s “A League of Their Own.“

Co-created and executive-produced by Abbi Jacobson (“Broad City”) and Will Graham (“Mozart in the Jungle”), “A League of Their Own” debuted at Tribeca 2022 on June 13. The TV reimagining of Penny Marshall’s beloved 1992 film of the same name was a “labor of love that has taken most of our adult lives,” Jacobson joked while introducing the pilot episode, which premieres on Prime Video August 12.

“We had a chance to talk to Penny before she passed away,” Graham explained. “She told us these stories changed her life and it will for you too. As much as we love the movie, it’s really the stories underneath it, including the ones of queer women, of women of color, those ones that didn’t make it into the 1992 film. Those have come to mean so much to us. Penny was right: The honesty, humor, commitment, and joy with which they fought their way onto the field, we’d never heard those stories before, truly, and they changed us. That’s why this show isn’t about one team or league, but about a generation of women who wanted to play ball, found their joy, and found themselves in the process.”

“A League of Their Own” captures the real-life all-female traveling baseball league formed in 1943, specifically centering on the Rockford Peaches in racially segregated Illinois. Jacobson stars as Carson, a catcher who runs away from her marriage and tries to untangle her sexual identity. “Barry” and “The Good Place” star D’Arcy Carden portrays Greta, a charismatic, empowered powerhouse slugger in a truly career-making turn. 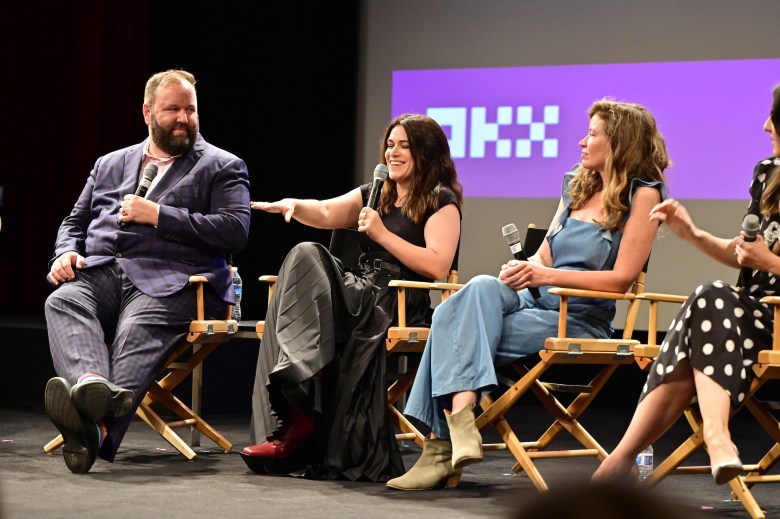 Will Graham, Abbi Jacobson, and Jamie Babbitt discuss the premiere of “A League of Their Own”

“I was in the post on this episode of ‘Broad City’ where we did this montage of very powerful women. I was in the edit with our editor at the time, Liz Merrick, and she was like, ‘I really want to include this woman, Mamie Johnson,’” Jacobson explained. “And I had no idea who she was. And Liz taught me who she was, and it was right around the same time when we were starting to do this [in 2017].”

Original All-American Girls Professional Baseball League (AAGPBL) player Maybelle Blair, now 95 years old, also served as a consultant on the series and was a large inspiration for Carden’s character, Greta. “Her spirit and her stories have infused every part of this show,” Jacobson added, jokingly revealing that Blair called her “little shit” on set.

During the live Q&A, Blair came out publicly for the first time to a standing ovation. “I thought I was the only one in the world,” Blair explained of the savior that was the AAGPBL. “I hide for 75, 85 years and this is actually, basically, the first time I’ve ever come out.”

Director Jamie Babbit shared the special bond on the set of “A League of Their Own,” saying, “My grandmother’s sister was a lesbian, same era as Maybelle. I always wanted to talk to her about it but I wasn’t out before she died. So what a gift, that Maybelle is in my life.”

Babbit went to the AAGPBL convention at Cooperstown the day after she was hired to direct the pilot: “There was a queerness in the air and just really joyful, amazing women who I just wanted to hang out with. I really wanted to bring that joy to the show,” Babbit said. “It was in the writing. I just didn’t want to fuck it up.”

Executive producer and writer Desta Tedros Reff added that the “North Star” for the series was authenticity.

“There was so much listening,” Reff said. “I’m queer, Black, I played softball in high school. And I’d never seen a show like this. I’ve never been part of a show like this. Will something like this ever exist again? We don’t know. So just really taking advantage of that opportunity and really orienting it in our own experience, which was something that was so new to me and felt so safe and positive. That’s a credit to Will and Abbi and reinforcing that.”

“A League of Their Own,” which endearingly fit like an old glove, reminded co-creator Graham of his own upbringing playing Little League as a kid.

“I cried for most of it,” he revealed. “I was like, I’m undercover and they’re going to find out I’m not a real boy and something bad is going to happen. There was something about the movie that said it’s OK to be on the field even if you’re not supposed to be on the field.”

The theme for the series is rooted in the “transformative quality of joy” and the purpose of finding a true team both on and off the field.

“I think the line that D’Arcy says in the pilot, ‘As long as we’re here, let’s do this, let’s rob the bank,’ is kind of how all of us feel about the show,” Graham said, “where it’s like it’s crazy that we’re getting to tell these kind of stories so we feel a lot of responsibility to do it really well and do it in a fun way and a way that hopefully everyone can relate to.”

The co-creator called to mind the famous Tom Hanks quote from the film: “The heart is what makes it great.” And this show truly does have heart.

A post shared by A League of Their Own (@leagueonprime)