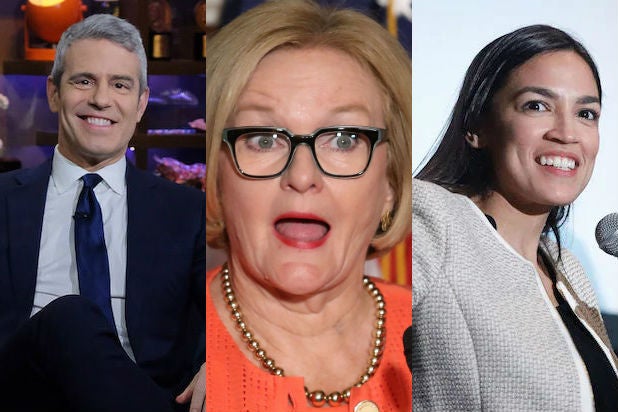 On Thursday, Congresswoman Alexandria Ocasio-Cortez dissed and dismissed former Sen. Claire McCaskill for comments McCaskill made the night before on MSNBC, in which Caskill appeared to blame key democratic constituencies for electoral setbacks.

Quote-tweeting a video from the appearance where, among other things McCaskill referred to transgender people as “transsexuals,” AOC noted the irony of McCaskill appearing on the cable news network as an expert on winning elections despite the fact that she was voted out of office in 2018.

“Why do we listen to people who lost elections as if they are experts in winning elections?” Ocasio-Cortez quipped before also noting that McCaskill lost her election in a Democratic wave year, despite following her own advice. “McCaskill tried her approach. She ran as a caravan-hysteria Dem& lost while grassroots organizers won progressive measures in MO. Her language here shows how she took her base for granted.” Ouch.

Meanwhile, Bravo host Andy Cohen stepped into a little bit on Thursday when he defended McCaskill, tweeting “You misspoke. Don’t think twice about it,” to McCaskill.

McCaskill was one of several MSNBC pundits  discussing why they think voters crossed party lines and voted split tickets when it came to presidential choice and down ballot races.

“I think it began around cultural issues. Whether you’re talking guns, or issues surrounding the right to abortion in this country, or things like gay marriage and the rights for ‘transsexuals’ and other people who we as a party have tried to ‘look after’ and make sure that they’re treated fairly,” McCaskill said. “As we circled those issues, we left some voters behind and Republicans dove in with a vengeance and grabbed those voters… You saw it in the South, I’ve seen it in some rural areas of my state.”

Backlash was swift, and within minutes of the segment’s end McCaskill was defending herself on Twitter. “That’s not what I meant obviously. Look at my record. I’m tired and was trying to say we need to also focus on the economic issues we champion,” McCaskill said.

Even so the criticism continued throughout the night.

“How DARE you, @clairecmc? How DARE you? ‘Rights for transsexuals.’ Oh, I’m sorry that I’m a f—ing human fucking being, you utter piece of garbage,” said journalist Parker Molloy.

“Hey @clairecmc, have you ever considered that transgender and non-binary people are part of the working class? That until this summer, in most of the United States, we could be fired from our working class jobs solely for being trans?” said activist Charlotte Clymer.

Meanwhile, after Cohen defended McCaskill, trans advocates who felt a cis male gay man doesn’t have the authority to grant forgiveness on behalf of the transgender community called him out.

“Who tf do you think YOU are to tell her it’s all ok that she sh– on trans people?,” Molloy said.

“Don’t forgive her on behalf of someone else. That’s not your place,” said another user.

“I’m so sorry I used hurtful term last night. I was tired, but never a good excuse. People have misinterpreted what I was trying to say. Our party should never leave behind our fight 4 equality for trans people or anyone else who has been marginalized by hate. My record reflects that [sic],” she said.

See the video — and AOC’s response, below: