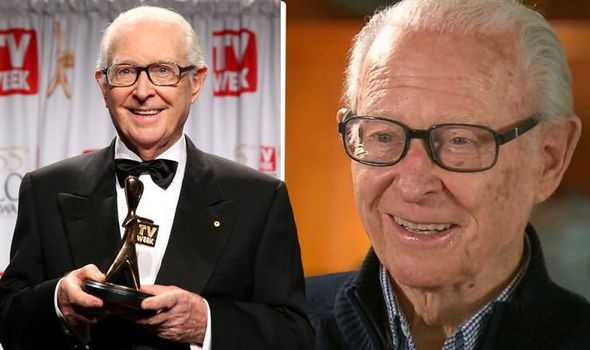 Brian Henderson has died aged 89. The Australian news anchor on the Today show passed away surrounded by his family, just a year after turning down more treatment for kidney cancer.

An absolute legend, a gentleman and a total professional who provided guidance and inspiration for many generations who followed

He added: “Brian was a much-loved member of the Nine family, hosting the Sydney weeknight news from 1957 until his retirement in 2002, becoming Australia’s longest-serving news presenter.

“He also hosted Bandstand for many years. I knew him – an absolute legend, a gentleman and a total professional who provided guidance and inspiration for many generations who followed.

Karl concluded his loving tribute by saying: “Brian was married to his lovely wife Mardi for 48 years.

“She was at his bedside this morning alongside his daughter Jody and Nicole.”

Brian announced in February 2020 that he was making the decision to not undergo anymore treatment following his kidney cancer diagnosis.

He told The Daily Telegraph at the time that he had had a “wonderful life” and simply wanted to spend his final days with those who were closest to him.

“I won’t go tomorrow, but what’s the point of living if you have to spend it in a hospital having treatment after treatment?” he shrugged.

It’s not the newsreader’s first run-in with the relentless illness.

He previously battled melanoma, prostate, bowel and throat cancer, and beat them all.

The New Zealand-born presenter began his career in 1953, after he moved to Oz to seek a future as a radio DJ.

Four years later, he joined Channel Nine and became a household name throughout his years there, from 1957 and 2002.

Brian also hosted the hugely popular Australian version of music show Bandstand between 1958 and 1972, which saw the rise of musicians Peter Allen and the Bee Gees.

Following the sad news, fans and celebrities alike took to social media to share their condolences with his family and loved one.

Chris Bowen, Australia’s Shadow Minister for Climate Change and Energy wrote: “When I was growing up. I knew everything I needed to know because Brian told me so.

Broadcaster Margaret Throsby penned: “There are lots of wannabes in broadcasting. And then there are the true greats and Brian Henderson was one of those.

“No ego. Beautiful innate talent as a newsreader, calm, authoritative, natural, no fuss. And a really lovely man. Vale.”

Presenter Ricardo Gonçalves commented: “I remember being in such awe of #brianhenderson when I met him while on work experience at @Channel9 in 1998. A TV legend.”

Brian is survived by his second wife Mardi, and two children from his first marriage, Nicole and Jody.