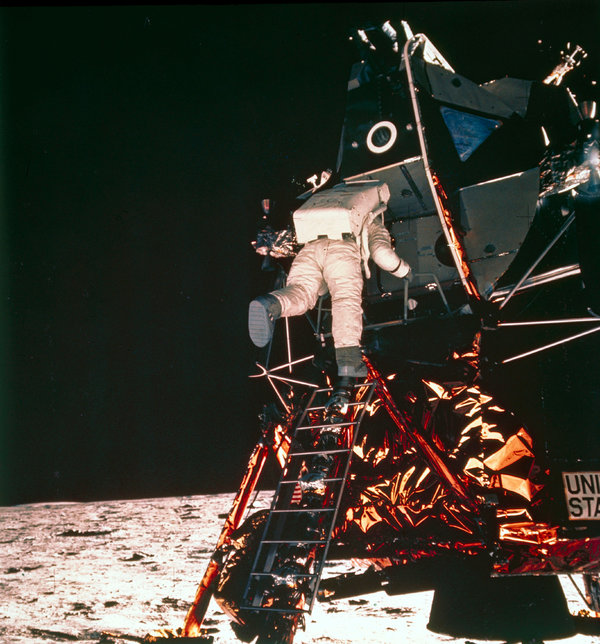 The most famous shoe print in the world is not on this world at all. It’s on the moon, probably still there in the gray dust.

On July 20, 1969, the Apollo 11 astronaut Buzz Aldrin took a step forward, backed up, then took a photograph. What he left behind on the moon and captured for the rest of us on Earth remains remarkable in its simplicity and timeless in its evocation.

“Framed in the photo was evidence of man on the moon,” Mr. Aldrin later wrote in Magnificent Desolation. “A single footprint, showing in perfect detail a reverse mold of the treads from the bottom of my moon boot.”

Mr. Aldrin’s footprint is about an inch deep — enough to cast a shadow from the dim sunlight over his right shoulder. It is straight on the sides and rounded at the toes and the heel, the shape of a racetrack. It is filled with lines, like rungs of a ladder, formed by eight flat, straight-edged ribs.

Who created such a historic sole? Who decided that straight, thick ribs are exactly what an astronaut needs for traction in the lunar soil?

A man named Richard Ellis is the person who captured the perfect blend of form and function. More than anyone, he decided what all the footprints on the moon would look like.

Mr. Ellis worked as a model maker for ILC Industries, now ILC Dover, the Delaware company that won the bid to create spacesuits for NASA’s Apollo program. ILC, best known for its Playtex division, also had military contracts for things like inflatable rafts.

Part of Mr. Ellis’s job was to take the 80 measurements of the astronauts so that engineers could design their suits. His lasting contribution, however, came from the blue silicone soles of the lunar overshoes.

Most called them moon boots. They slipped over the shoes worn in the spaceship, like galoshes for the rain.

“It wasn’t something that NASA dictated, ‘You have to make the tread look like this,’” said Bill Ayrey, a retired ILC test engineer and longtime company historian. “It was him thinking, ‘What kind of tread would it be? Well, let’s do it like this, with full lines across, and that should keep you from slipping.’”

“Moon Boot,” a book by David H. Mather about the design, suggests that the sole’s wide ribs were meant to accommodate the ladder rungs of the lunar module, but Mr. Ayrey doubts it. It is more likely, he said, that Mr. Ellis, who worked for ILC for 25 years and died in 2006, just chose to make his job easier.

“Maybe Richard’s approach was, ‘I have to make this mold, and I’m going to make it simple, and it probably works fine,’” Mr. Ayrey said. “And it did. It worked just fine.”

The tread was no afterthought of shoe design; in the 1960s, soles had become a focus of footwear fashion. Converse made its first All Star basketball shoe, with its complex rubber-sole pattern meant to stick to hardwood, about 50 years before Apollo 11.

In the 1930s, Vitale Bramani designed the Vibram sole, the “waffle stomper” still popular with hikers and climbers. A trip to any shoe store would have provided Mr. Ellis or ILC and NASA engineers with assorted options to imitate.

But there were caveats. Before the Apollo missions, NASA had photos but no soil samples from the moon. The agency was not sure what kind of surface the men would be walking on. Was it deep? Was it slippery? Would it shift like sand or clump like clay?

“In case the lunar soil turned out softer than they anticipated, they wanted something that would spread the weight of the astronaut on a pretty large footprint,” said Cathleen Lewis, the curator of spacesuits and international space programs at the Smithsonian National Air and Space Museum.

When Neil Armstrong took his first step on the moon (soon trampled by subsequent ones), he clung to the ladder. No one was sure how stable the surface was, or if it “would be like quicksand, literally sucking a person down into a quagmire of dust,” Mr. Aldrin wrote. He discovered it was like “powdered charcoal,” and noted that he could create footprints and make out the treads.

So could everyone else.

Though moon boots had a calf-high upper, made of layers of woven stainless steel and high-tech fabrics, which went through several redesigns, the rubber soles and their raised, protective toe barely changed through the entirety of the Apollo program.

Only the last two men to walk on the moon, Gene Cernan and Harrison Schmitt of Apollo 17, brought theirs back. Other used boots remain on the moon, left behind to save room and weight for return voyages. Mr. Armstrong and Mr. Aldrin tossed their boots from the hatch, like children dumping muddy shoes to the porch.

“They probably went much further than a normal toss given the one-sixth gravity,” Ms. Lewis said.

The moon boots inspired a generation of off-the-shelf imitators, made mostly for snow. Tecnica quickly introduced Moon Boots. A plethora of cheap foam boots followed. Their thick rubber-soled, soft-upper influence is still seen in all-weather gear by brands like Sorel and in snowboard boots by Burton and others, not to mention Chanel.

But the treads they leave on Earth never match the ones on the moon. Which raises the question: If, someday, humans create a lunar outpost, what will the bottom of our shoes look like?

Would Nike and Adidas fight to get a swoosh or three stripes imprinted into the lunar soil? Would Carhartt or L.L. Bean bid to create a tread design solely for the moon’s environment? And would the boots work on Mars?

It is hard to imagine that any would equal the original footprints left on the moon 50 years ago.

“The footprint ties into Neil Armstrong’s statement when he stepped out onto the surface — ‘one small step for man,’” Ms. Lewis said. “It’s a reminder that humans were there, that humans explored. And it’s still there.”

John Branch is a sports reporter. He won the 2013 Pulitzer Prize for feature writing for “Snow Fall,” a story about a deadly avalanche in Washington State, and was also a finalist for the prize in 2012. @JohnBranchNYT