Sam Asghari appeared to be chowing down on a burger as he drove a white BMW in the Los Angeles area on Oct. 23 while Britney rode passenger.

Britney Spears, 39, and Sam Asghari, 27, were spotted out-and-about for a cruise and fast food run. Sam could be seen holding a burger (with a large bite out of it) as he drove a white BMW car in the Los Angeles area on Saturday, Oct. 23. Britney, who rode passenger, looked relaxed and casual as she threw her blonde hair up in a messy bun and sported a pair of sunglasses — see the photos via DailyMail here.

The sweet couple have been enjoying plenty of time together lately, including last weekend when they went for a an evening bike ride using lights. Britney, rocking a baby blue t-shirt and shorts, looked totally confident as she rode with Sam behind her, taking in the sights of her neighborhood. 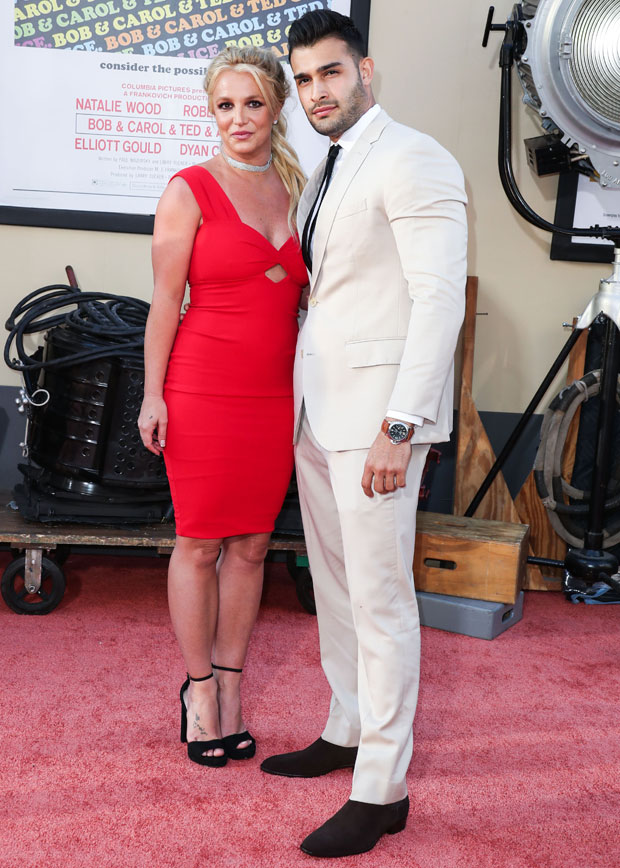 Earlier this month, the pair also set off on a private jet as they headed to a tropical vacation in celebration of Britney’s conservatorship news: in early October, her father Jamie Spears was suspended from conservator role, which he held over her estate for 13 years. Jamie was replaced by certified public account John Zabel following the “Toxic” singer’s bombshell two court testimonies and numerous social media posts advocating for her freedom. On the jet, Brit and Sam enjoyed a stunning dessert platter as she took one step closer to justice.

Sam sweetly proposed to Britney after nearly five years on Sept. 12. The blonde was over the moon as she flashed her circle shaped engagement ring for an Instagram video alongside her handsome fiancé. In the video, Sam can be briefly heard asking, “look at that, you like it?” as Brit naturally gushed back, “yeah!” She also shared her excitement in a caption, penning, “can’t f***ing believe it!!!!!!” with a slew of engagement ring emojis.

The duo have yet to set a date, but Brit most certainly has wedding bells on her mind — taking to TikTok with her “predicament” on Oct. 5. “I have no idea where I want to get married,” Britney confessed in the video while ridin in a golf cart. “We don’t know if we want to get married in Italy, or Greece, Australia, or New York City,” she pondered, as Sam suggested, “Why don’t you ask the fans?”