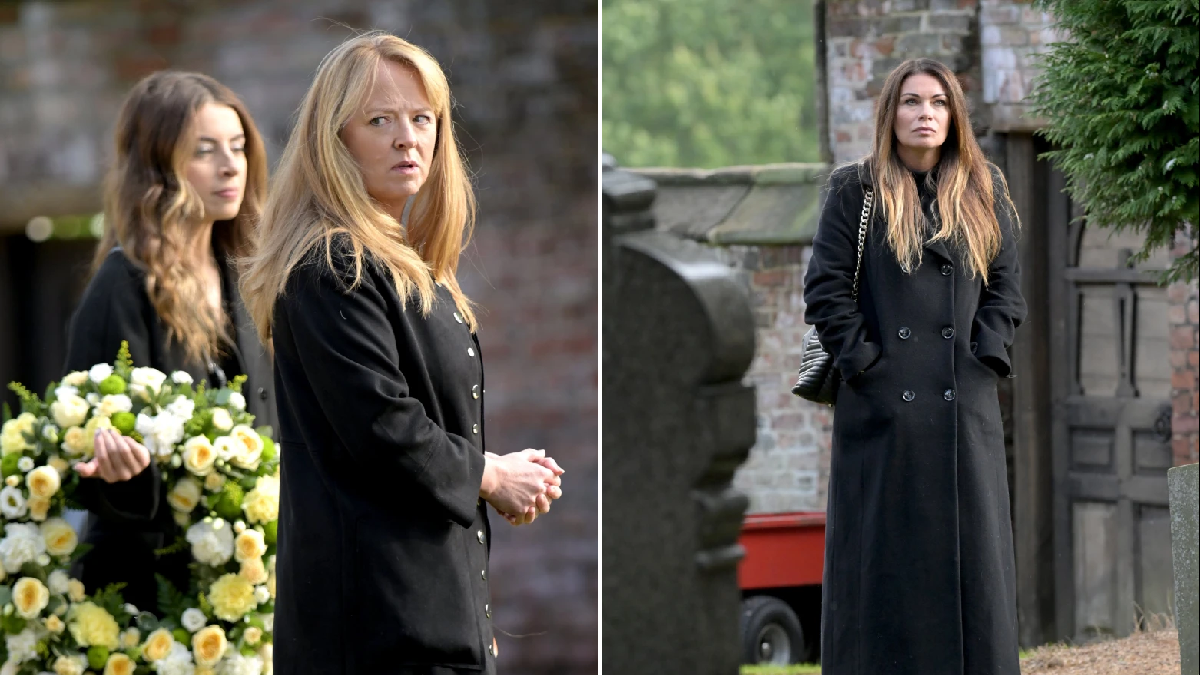 Coronation Street viewers will see more sad scenes on-screen very soon in the aftermath of Johnny Connor’s (Richard Hawley) death as the residents of Weatherfield gather for his funeral.

New filming pictures show a grief-stricken Jenny Connor (Sally Ann Matthews) having to deal with saying goodbye to her former partner after he died saving her from the sinkhole.

She’s supported by Daisy Midgely (Charlotte Jordan) who is seen by her side in the on-set snaps.

Jenny can be seen looking angered by something in her eye line and seeing as a soap funeral is never smooth-sailing, there’s no doubt some nasty surprises in store for the Rover’s Return landlady.

In further pictures, Carla seems dejected and appears alone as she attends to pay her respects, suggesting tensions only grow between herself and Jenny as they deal with Johnny’s death in very different ways.

Meanwhile, Peter will also be on-hand to help Jenny through the day – but will she start to listen to her family as she begins to alienate those around her?

It’s been confirmed Jenny will start to go on a downward spiral as she struggles to cope with her loss after discovering David Platt (Jack P Shephard) could have prevented Johnny’s death if the sinkhole was fixed earlier.

When Daisy overhears David speaking to sister Sarah Platt (Tina O’Brien) about the sinkhole, she is horrified and tells Carla and Jenny what she’s learned.

However, as they start to blame David for the catastrophe, things will go from bad to worse for Jenny in the days leading up to the funeral.

Daisy and Carla will both raise their concerns as Jenny in the coming days, who refuses to listen to their advice, with her stepdaughter telling her she’s worried about her state of mind.

Carla takes drastic action to stop Jenny’s partying attempts, turning off the jukebox in the Rovers and locking the door – which only makes things worse.

As Jenny continues to drink alone, her love interest Leo Thompkins (Joe Frost) arrives and offers to support her through the difficult time.

Will Jenny manage to get through the day of the funeral with the support of her family, or will it all be too much to cope with?