To become the Yankees’ most improved pitcher this season, and a bulwark in their unsteady starting rotation, Domingo German got technical help from the most obvious authority, the team’s pitching coach. For the bigger picture, though, when he needed personal and professional mentoring, German turned to an unusual source — a once-promising pitcher who struggled immensely in his own major league career.

German could have easily sought help through the large network of baseball stars from the Dominican Republic, his home country, including the Hall of Famer Pedro Martinez, who is known for dispensing wisdom to young pitchers.

Instead German contacted Daniel Cabrera, a virtual stranger now working for a real estate company in the Dominican. The two had never met or spoken before, even though they came from the same municipality, San Pedro de Macorís, a hotbed of baseball talent. Their relationship started last summer with an Instagram direct message.

“There are a ton of other people, like Pedro and other former pitchers, and people much closer to him than me,” Cabrera, 38, said in Spanish in a telephone interview. “But that’s why I say it was a work of God. He was put in my path.”

A right-hander like German, Cabrera pitched from 2004 to 2009, mostly with the Baltimore Orioles. He had a career 5.10 earned run average and walked a lot of batters, yet he kept getting opportunities because of the tantalizing potential in his 6-foot-7 frame and his high-90s fastball.

But it was the failures that made Cabrera seem like an ideal choice to guide the cheerful, soft-spoken German. As he struggled through a rough 2018 season, ultimately posting a 5.57 E.R.A., German sent Cabrera a direct message on Instagram.

German, 26, had been meaning to reach out to Cabrera for some time. There were several things about Cabrera that stood out to German, from the trajectory of his career to the family photographs that filled his Instagram page.

“He and I have the same personality and the same way of living,” German said.

Soon the two exchanged phone numbers and began talking frequently, German requesting counsel, something he said he had never sought out before like that. 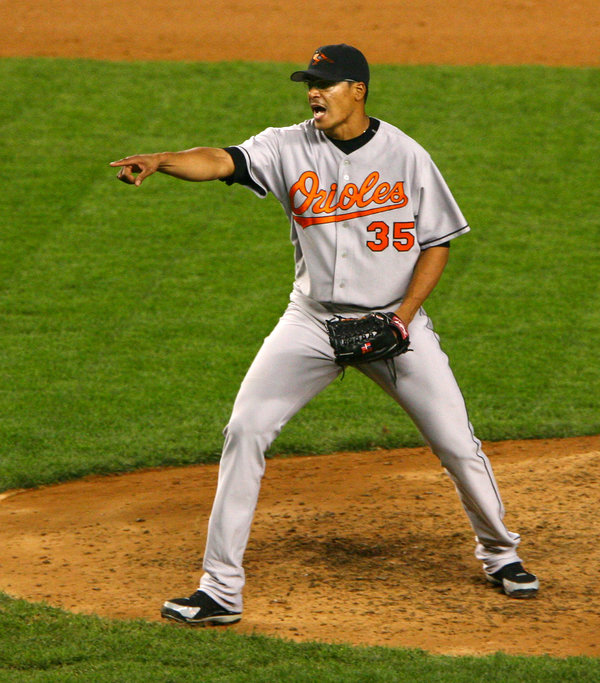 More than anything, Cabrera told German about his failures.

“If I could redo my career, I would have left many things behind,” Cabrera said. “Things that had nothing to do with baseball. My career could have been different. I told him: ‘Don’t let what happened to me happen to you. I wish I could’ve found someone back then to tell me what I’m telling you now.’”

Because he came from humble beginnings, Cabrera said, he enjoyed life in the major leagues too much. After a poor performance, he tried to forget about it by going out and having fun — ignoring advice from his brothers.

“The real workhorse pitchers, when they have a bad game, they’re at the field first thing, working so that the next game doesn’t go the same way,” Cabrera said.

Cabrera said German was different because he was willing to follow the counsel of an elder. So when German asked Cabrera this year about helping him find an apartment to buy in the Dominican capital, Santo Domingo, Cabrera told German to wait.

“I bought an apartment on the beach when I was having a good season,” Cabrera said. “So when I was playing, I thought a lot, ‘Man, how great would it be to be in the Dominican at my apartment?’ So my mind was on the Dominican when it should have been on baseball.”

German and Cabrera still talk weekly. Cabrera has watched German’s starts from afar and offered tips, and as German fixed his delivery over the winter, he sent video of the changes to Cabrera. They have also discussed the pain in German’s left hip, which turned out to be a strained hip flexor that led to a month on the injured list.

“He’s not a person who will get into a long discussion to tell me something,” German said. “He says it short and direct, and it’s helpful. If he does something, he does it for love. He does it because he really wanted to help someone.”

One of the biggest factors in German’s breakout season has been an improved curveball. Over the off-season, he and Larry Rothschild, the Yankees’ longtime pitching coach, met at the team’s spring training facility in Tampa, Fla., to go over video.

They noticed that two critical elements of German’s pitching mechanics had changed from 2017, when he made a promising major league debut, to 2018. First, German’s lead arm was dropping too much in his delivery, which affected the angle of his body and his command. Second, his back leg was bent more, and his command had been better when the leg was straighter.

The results in 2019: Entering his start on Wednesday, German had an 11-2 record and 3.40 E.R.A., which is the best on the team. Opponents were hitting .142 and whiffing 48 percent of the time they swing at his curveball, according to Baseball Savant, making his curve one of the most difficult to hit in the majors. Rothschild said German’s confidence had grown as the season progressed.

“I’ve very satisfied with myself and those that have helped me,” German said early this season.

Although German has proved invaluable to the Yankees in the absence of the ace Luis Severino and the inconsistencies of other starters like James Paxton, C. C. Sabathia and J.A. Happ, his role could change. The Yankees are targeting pitching upgrades ahead of the July 31 trade deadline, and if they acquire another starter, German could end up in the bullpen.

German went into this season expecting an innings limit of some sort. He has never thrown more than 124 in a season, and he logged only 94 last year between the major and minor leagues. He has already pitched 86 innings this season, including four during a rehabilitation assignment in the minors. For young pitchers, a substantial workload increase is viewed as potentially harmful.

“If it looks like he’s getting tired and different things, you want to prevent an injury, not react to it,” Rothschild said last month.

If German stays in the rotation, he might not get far past his previous career high in innings anyway, because of the injury. Should the Yankees acquire another starting pitcher, German could be an option as a hard thrower in the bullpen.

“He keeps very much earning himself that spot” in the rotation, Yankees Manager Aaron Boone said last week after German’s 11th win.

“But we also feel like with Domingo, no matter what our team is like moving forward, depending how much volume he gets to, he can fill so many pretty exciting roles for us — whether it’s as a starter or a guy that can give you multiple innings in a key spot out of the bullpen or a high leverage spot late — you feel good handing him the ball. So right now, he’s in a really good place.”

German has said all the right things about any uncertainty surrounding his role. “Wherever they put me in the game, I’ll do my job and help the team,” he said.

And no matter what happens, German will have his mentor a phone call away. Cabrera once pitched out of the bullpen.