Though still only 35, the Duchess of Cambridge’s brother, James Middleton, has already blazed an adventurous trail through the commercial world, founding three companies.

But the Midas touch exhibited by his parents, who’ve made millions from Party Pieces, the business they famously began in their kitchen, has so far stubbornly eluded him.

Regrettably, that’s not all. For I can reveal that just six months after Boomf — the company James founded in 2013 to exploit the market for novelty marshmallows — went bust with accumulated trading losses of almost £2 million, administrators have enlisted legal firm Withers to assist them in investigating ‘a payment made to American Express UK’ of almost £52,000.

The money was handed over on November 24 — just three weeks before Boomf went into administration.

‘We are obliged to review all the information available to us and conduct an initial assessment of whether there are any matters which may lead to recoveries for the benefit of creditors,’ the administrators record in their progress report, published this week. 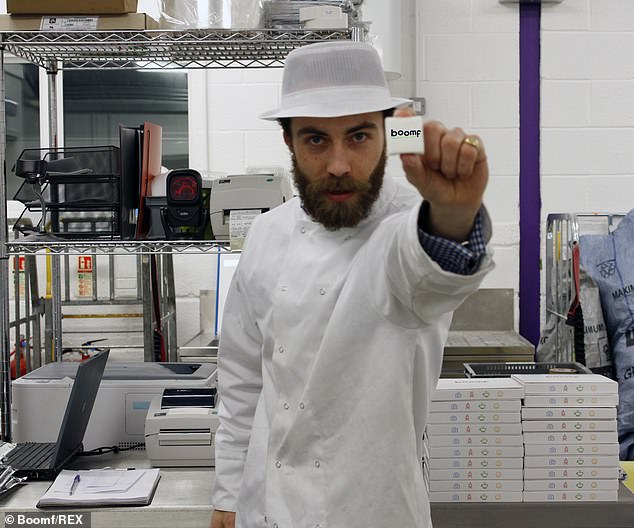 The Duchess of Cambridge’s brother, James Middleton, has already blazed an adventurous trail through the commercial world, founding three companies

The American Express payment, they add, was made by Boomf’s chief financial officer, who explained that she had made the payment ‘solely to protect her personal credit position, as she was named on the card’.

One of the administrators, Peter Kubik of UHY Hacker Young, tells me that ‘certain payments are allowed’ even as a company heads into administration, particularly if they ‘preserve the value of the business’.

But that was not the case in this instance, adds Kubik, who explains: ‘She [the finance officer] shouldn’t have done it. The creditor should not have received that money and we’re asking for it back.’

The administrators managed to sell Boomf for £300,000.

Middleton was enjoying Wimbledon this week with his wife Alizee Thevenet. ‘This is just a usual part of the administration process that certain payments are looked at,’ he tells me. ‘This is one of them.’ 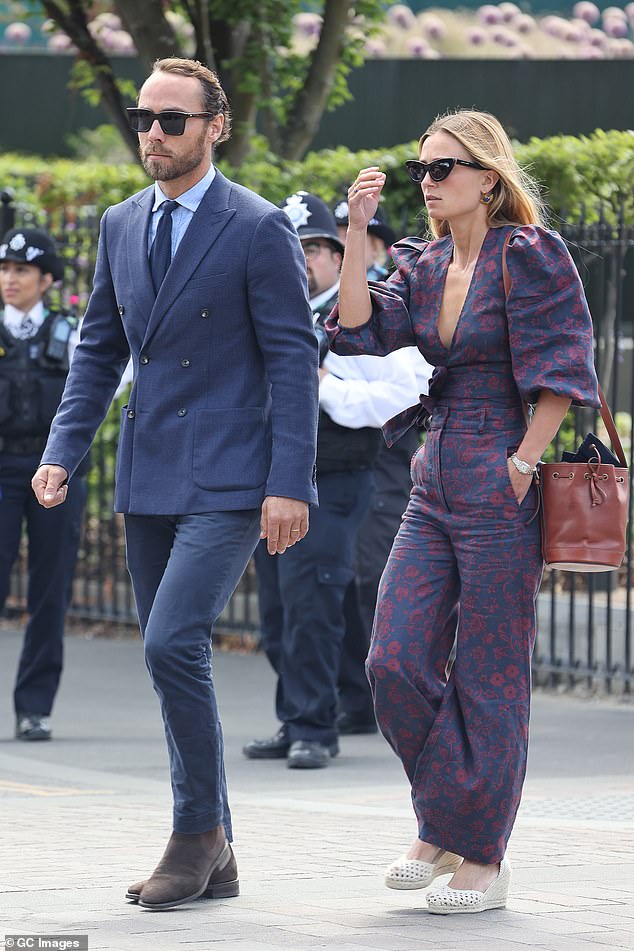 It’s the Chelsea brasserie whose regulars include Sir Michael Caine, Dame Joan Collins and John Cleese, and where Hugh Grant lunched with his wife, Anna Eberstein, on their wedding day.

But I can reveal that Colbert, in Sloane Square, was the scene of a horrific incident at lunchtime on Monday when two men, armed with a machete and iron bar, rode in among Colbert’s outside tables on a moped.

‘They went for a guy sitting at one of the tables,’ I’m told. ‘They went for his watch.’ Other diners fled as the attack happened. ‘They rushed inside in terror.’

A Met Police spokesman tells me: ‘A group were approached by two males on a moped and threatened with a knife and a baton. The suspects made off with the victim’s watch. Detectives from the Central West Command CID are investigating. At this early stage there have been no arrests.’

The Chiswick-born actress, 48, whose love life has featured even more twists and turns than the popular ‘reality’ show, tells me: ‘I have been watching Love Island and, before you ask, I don’t want to apply. I haven’t been offered any reality TV gigs and I don’t think my family would let me.’

Beckinsale is in London for the National Film Awards, where she won the Best Actress prize for her role in the action–comedy Jolt. She adds of her reasons for avoiding Love Island’s villa in Majorca: ‘It looks like hell and just the worst thing to be on. First off, I don’t like dating, and, second, I don’t like being at a pool with lots of people that I don’t know.

‘It’s like watching a true crime and you can’t stop it. It’s a bit like a car crash.’

The daughter of Porridge star Richard Beckinsale adds: ‘Because I live in America, I get excited about slightly naff English things like Love Island and Pot Noodles — so it’s really important to me.’ 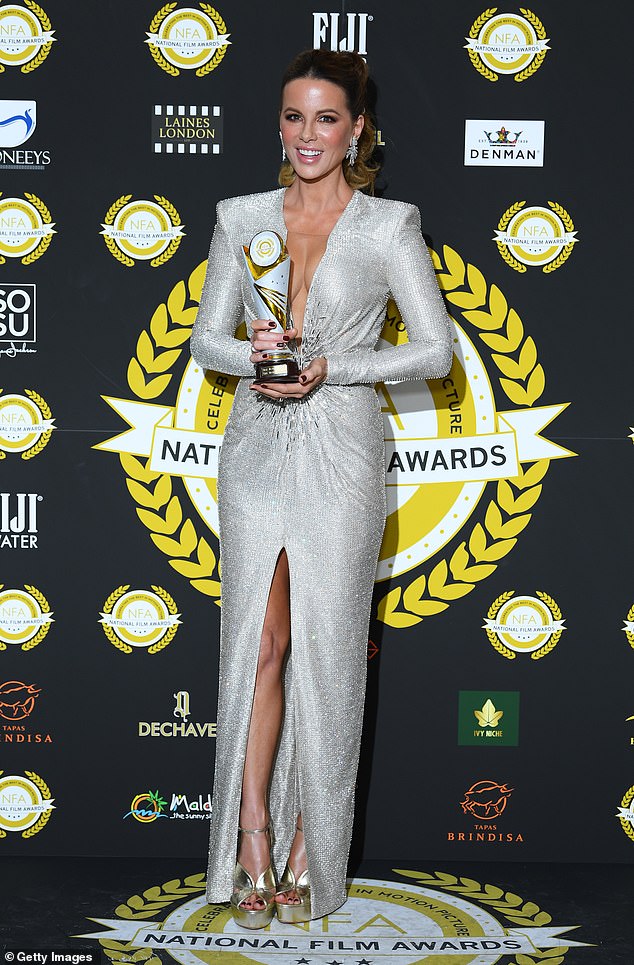 Kate Beckinsale with the award for Best Actress for ‘Jolt’ during the National Film Awards 2022 at Porchester Hall on July 04, 2022 in London

Sir Paul McCartney, 80, and Diana Ross, 78, clearly won’t be the last of the old stars at Glastonbury.

I hear 1970s chart-toppers 10cc are back in demand. ‘We’ve had an offer to play the legends slot at Glastonbury,’ reveals Graham Gouldman, 76, co-writer of hits including I’m Not In Love.

Perhaps he could ask Queen’s Brian May to flesh out the ranks?

‘I’m releasing a track with Brian next week called Floating In Heaven. It’s to accompany the first images from NASA’s James Webb Telescope.’

Having given her anti-vaxxer boyfriend Andrew Wakefield the elbow, Elle ‘The Body’ Macpherson shouldn’t be short of admirers.

Yet the supermodel, 58, chose to take son Flynn with her to the Dior Haute Couture collection fashion show in Paris. ‘My favourite date,’ she jokes, next to this photograph she shared with fans.

Flynn, 24, who went to £22,530-a-year Latymer Upper School in West London, is one of her two sons with hedge fund tycoon Arpad ‘Arki’ Busson. Flynn, who works in property development, was joined by his DJ girlfriend, Anna de Ferran. 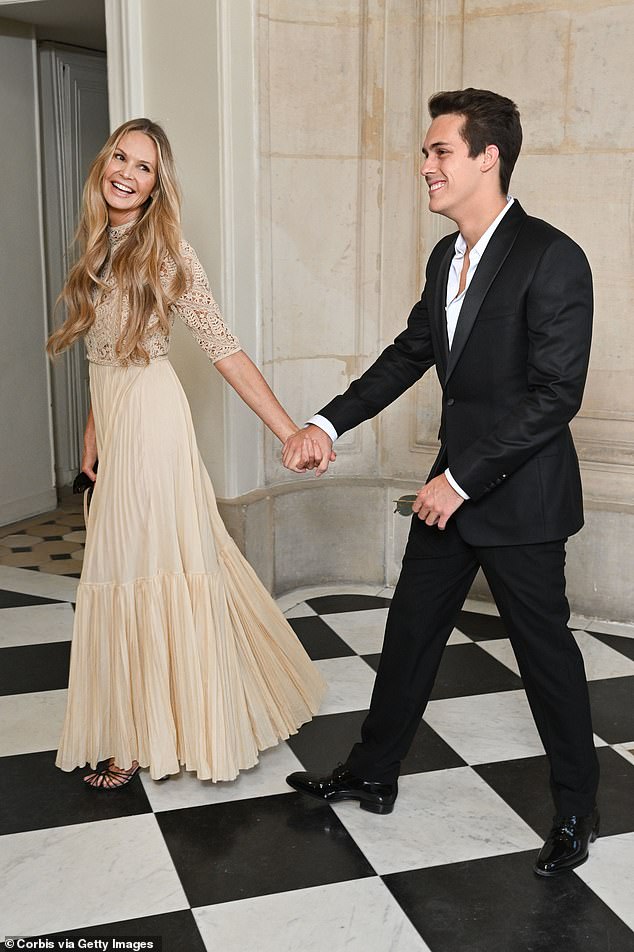 Impressionist Alistair McGowan, who now combines his comedy with classical piano playing on tour, has found tickling the ivories surprisingly dangerous. ‘You never think you could get injuries from playing the piano, but of course you can,’ says the TV star, 57. ‘And I’ve injured my shoulders and my back and my knee and my foot, and lots of fingers and thumbs as well over the last six or seven years periodically.’ He adds: ‘So I have to limit it now to about three hours a day on and off. I would do more — I was doing six.’

Frank Skinner is struggling to adjust to his lower profile since the BBC show he presented, Room 101, was axed in 2018 after 24 years. ‘I went to a screening of The Princess documentary about Princess Diana,’ the comedian says. ‘There were two women standing shoulder to shoulder in front of the poster. A guy came up and said to me: ‘Could I take a photo?’. I said: ‘Yes, of course.’ I thought I’d be all humble, and said: ‘Do you want me in it? Ha ha.’ And he said: ‘No, I just want you to move.’ He was actually asking me to move so he could take a photo of these two women. I felt my shoulders dislocate. Oh, it’s really awful.’