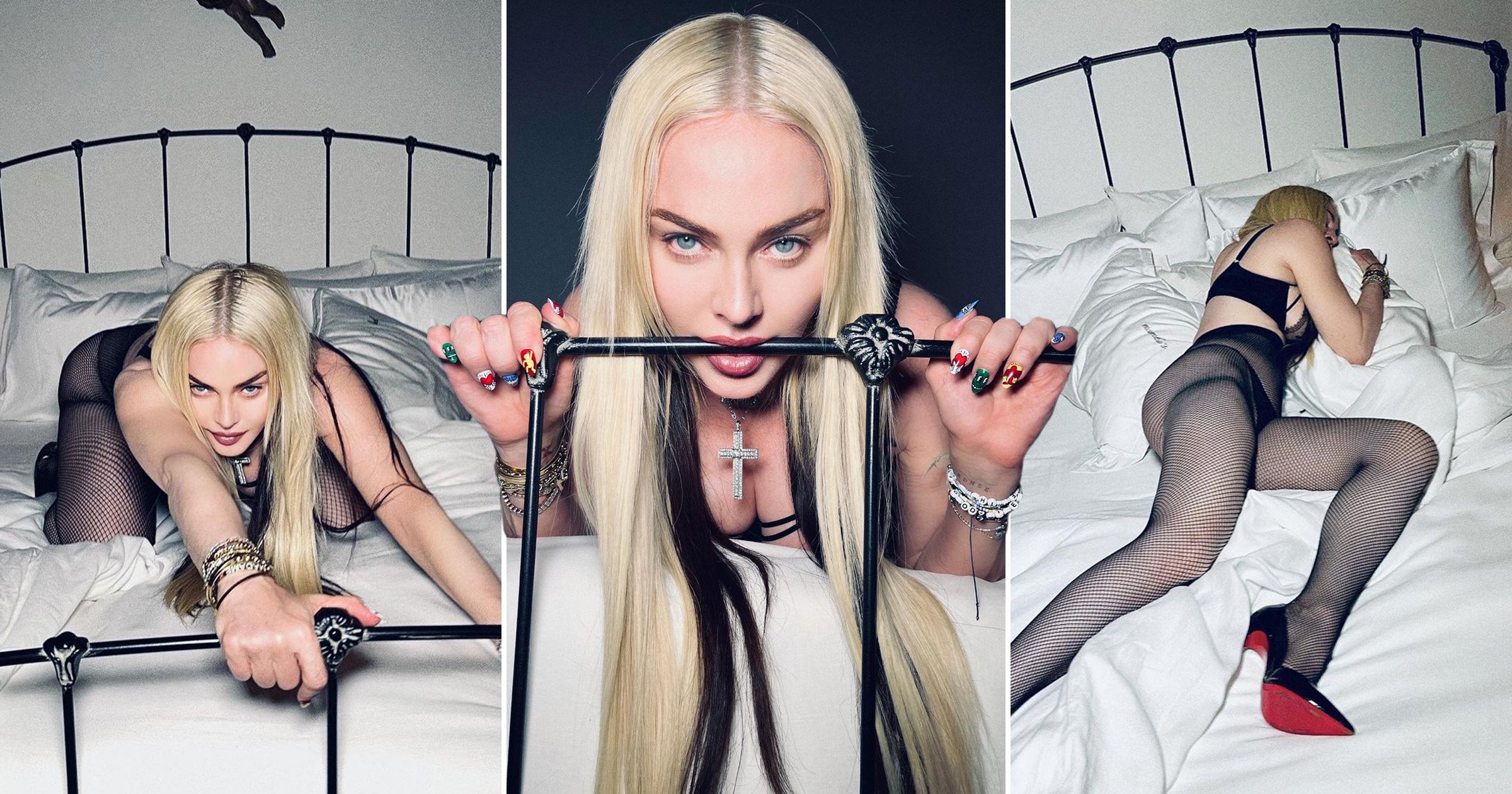 Madonna, she’s only done and done it again, hasn’t she?

The queen of risque is also the queen of getting us talking and perhaps feeling we’d been a little quiet lately (the knife pics weren’t enough?) the 63-year-old set the cat among the pigeons with the bedroom shoot to end all bedroom shoots this week.

Taking to Instagram – forget the Sex book, it’s all about the stealth nipple flash on the ‘gram these days – Madonna flirted with the platform’s censors and dared them to remove these snapshots.

In the photos, the Vogue singer was seen with long, blonde hair and wearing only a bra (at times), fishnets and black Louboutins, as she writhed around, and under, a bed.

At one stage she…planked? And in another, which is the shot that seems to have tickled punters the most, she’s half under the bed with what some would call a rather ‘pert derriere’ poking out.

Mads simply wrote in one major case of caption not matching the photos: ‘Angel watching over Me.’

While some were clutching their pearls, as they’re want to do in times like these, others were finding it all wildly amusing.

Piers Morgan shared the image and wrote ‘rock bottom’, which we can only assume to Piers is a double entendre, while Anneka Rice mused: ‘Madonna and I are exactly the same age. I presume she’s searching for her phone charger. If I tried that I’d never be able to get up again …’

It’s Kate Beckinsale’s reaction that has tickled us the most, though as she used a photo of the singer’s backside to prank her daughter, Lily Sheen. Classic.

The star made it seem like she’d shared a picture of her own bare bottom in a pair of fishnet hose on Instagram, and her 22-year-old daughter was baffled before finding out the truth.

She shared their text exchange on social media, as she first wrote: ‘Do you think it’s too much that I posted this? The thing is my a** looks good.’

Lily replied: ‘I’m a little confused I must say. I do think it’s a little much but it’s also very arty.’

However, Kate quickly revealed the photo was actually Madonna’s viral snap, and she teased her daughter for not realising, as she added: ‘Like I’d ever… I can’t believe you can’t recognise your own mothers anus from under the bed (sic).’

Lily described the exchange as a ‘rollercoaster’ while Kate admitted she was ‘snorting’ with laughter as her daughter replied: ‘I couldn’t even sign onto Instagram and check I was so confused. I’m so relieved.

‘I legit sat down to deal w that. My coworker came up and asked if I was on break (sic)’

She insisted she wouldn’t have even been ’embarrassed’ for herself if her famous mum had actually posted her own snape like that, but she ‘would be concerned’.

Kate added: ‘As if I’d take and post that you maniac,’ before writing: ‘Also what am I doing under the bed and when did I get that rug.’

Anyway, anyone heard from Lourdes?