Despite having split from her fiancé, Joel Schiffman, after eight years together, Hoda Kotb is not afraid to admit about the influence he had when it came to naming her two daughters, Haley Joy and Hope Catherine.

Alongside Jenna Bush Hager, the two Today hosts recently opened up about the inspirations and meanings behind their girls’ names, both having two daughters.

The mom-of-two hinted at how having waited so long to have children, and going through the adoption process with both, inspired her name choices.

WATCH: Jenna  ‘hustled’ to get to Hoda after emotional Today Show episode

With Haley, she explained: “She seemed so one in a million,” which made her think of Halley’s Comet, one of the most iconic space phenomena in the world, which occurs once every 75 years.

Her middle name was her sister’s suggestion, an idea that came easily to her when Hoda would tell her what a “joy” her new baby was.

For Hope, she admitted: “It was such a no-brainer, it was such an easy pick.”

A post shared by TODAY with Hoda & Jenna (@hodaandjenna)

Referencing being with Joel at the time, and their wish of having children, she explained: “That’s what we’d been doing, was hoping, and then she came. That was just simple.”

MORE: Hoda Kotb returns to social media after absence – and her family photo is the sweetest

MORE: Hoda Kotb is all smiles during night out supporting Jennifer Lopez

The two co-hosts went on to discuss just how right their choices felt, with Jenna opening up about how she came up with the names Mila and Poppy. 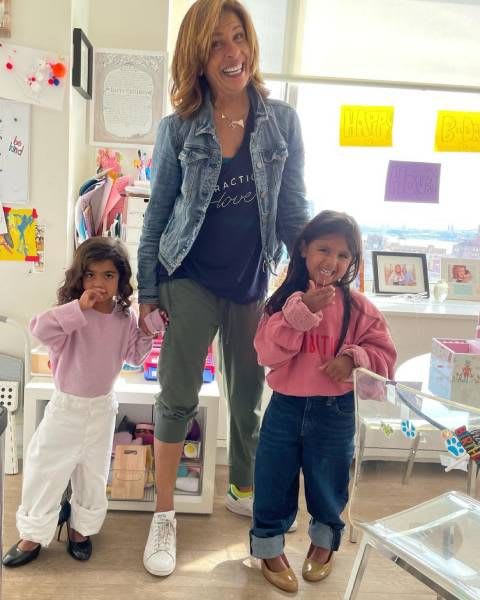 The star confessed that while Poppy’s name came easily to her, Mila’s was more difficult. She revealed that in fact: “It’s Margaret Laura, named after both of our moms,” saying how she was named after her grandmother, Laura Bush’s mother.

However, while she loved the idea, when Mila was born, Jenna explained: “We thought we were going to do it, but she didn’t look like a Margaret,” which made them then think: “Mila! It’s kind of a combination of Margaret and Laura.”