Johnny Depp is ready to rock back to stardom: Hollywood icon plans music-and-movies return after court victory over Amber Heard

Johnny Depp is planning a double-pronged showbusiness comeback after his stunning court victory.

The actor, 58, smiled and shook hands with fans at a pub in Newcastle upon Tyne last night after watching the US jury brand ex-wife Amber Heard a liar.

Buoyed by fevered support on social media and in the courtroom, he believes he now has a ‘golden opportunity’ to press reset on his career.

Later this year he plans to release an album with guitar legend Jeff Beck, 77, written by the two men at Beck’s home in Sussex where Depp has been spending months at a time. He will also start making art house films.

His legal team hailed the verdict, with the British law firm Schillings saying that they ‘could not be happier for him.’ 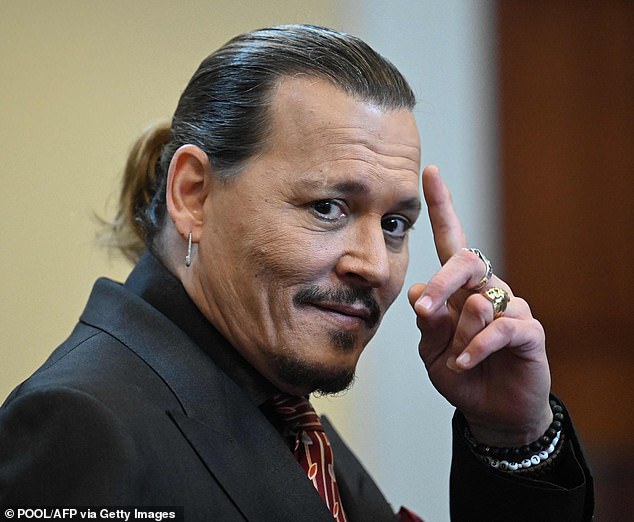 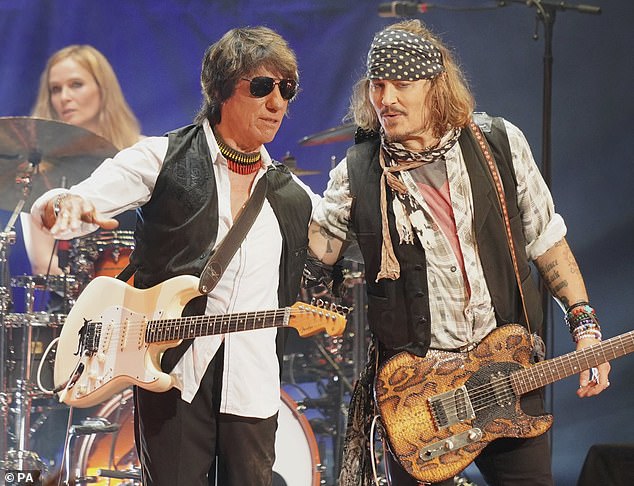 Mr Depp has performed alongside guitar legend Jeff Beck and plans to release an album with him this year. He has spent months at a time at Beck’s house collaborating with the music giant

The company said that he is satisfied that he has had the chance to ‘expose’ the untruths told by Miss Heard.

In particular, his lawyers felt it significant that Heard confessed that she had failed to donate $7million (£5.6million) to charity from her divorce settlement, as she had claimed in London – effectively admitting that she had perjured herself in the High Court in 2020.

A spokesman for Schillings, said: ‘We are delighted that Johnny got his chance to explain what he went through, as painful as that must have been.

‘In the aftermath of the UK judgment, Johnny said that it would not change his fight to tell the truth, that his resolve remained strong and that he intended to prove that the allegations against him were false.

‘We believe that he has now finally managed to achieve that, and we could not be happier for him.’ 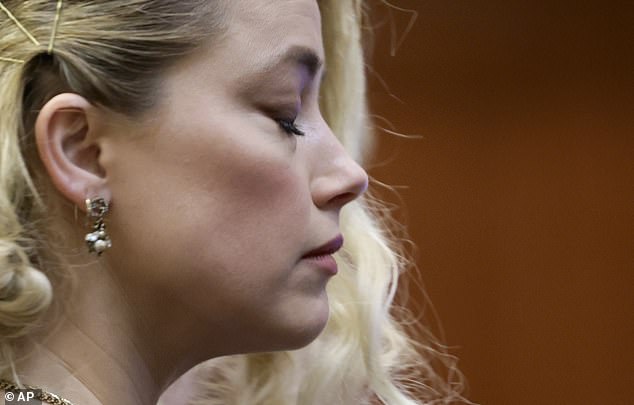 Depp has stayed largely silent since the verdict in the UK court, but told journalist Jason Solomons: ‘This is the golden opportunity to do exactly what I’ve wanted to do for years, which is make the films or the cinema that I want, to stay away from limitations, not allow for any unintended fingers to get into the pie, which is to say, do films that don’t need to be $300million films.’

In court in the UK in 2020, it was revealed that he had earned up to £400million across his career.

It was apparently spent on property, drugs, drink and whims such as firing the ashes of his hero, the writer Hunter S Thompson into space, which cost him £4million.

Post-disgrace, his bohemian persona – he presents himself as a high-living carefree wastrel – was unchanged.

He now hopes to pick up the threads of his film career, which hit the buffers after he lost his London libel action and agreed to withdraw from the Harry Potter spin-off Fantastic Beasts: The Secrets of Dumbledore.

In a wide-ranging interview with film critic Solomons, released on his podcast Seen Any Good Films Lately?, Depp revealed that he expects to return to acting.

He draws a distinction between cinema and movies, ‘a grand difference I feel’.

He explains that cinema gives you ‘that sort of freedom to create, show bits of hints of character, to reveal the crack, that’s an exploration; whereas other times, where you’re making a movie, you get in there, they want the lines said or the jokes spewed and then you get out – if you can.’

The verdict means that Miss Heard has once been believed by a British High Court judge but disbelieved by a jury in America.

British PR expert Mark Borkowski said: ‘There is no way back for Heard in Hollywood. If you’re sitting there making a movie or thinking about casting it, are you going to hire her?

‘Look at the huge outcry about Aquaman 2 [where a petition to have her kicked off the film hit four million signatures last night]. The trial pollutes any marketing or PR to launch a film.’