Strictly Come Dancing 2020 viewers saw Oti Mabuse, 30, and Bill Bailey, 55, win the Glitterball trophy, a year after Kelvin Fletcher, 36, triumphed with the professional dancer. The former Emmerdale star took to Twitter to congratulate the pair on their win last month, but noticed a viewer wasn’t so impressed with the result.

“What a show and what a winner! Well done @BillBailey ALWAYS expect the unexpected #StrictlyFinal.”

While many fans of the show praised the winning dancing duo, one viewer expressed their disappointment on Kelvin’s post.

The Twitter user wrote: “Load of rubbish I will never watch Strictly again.” 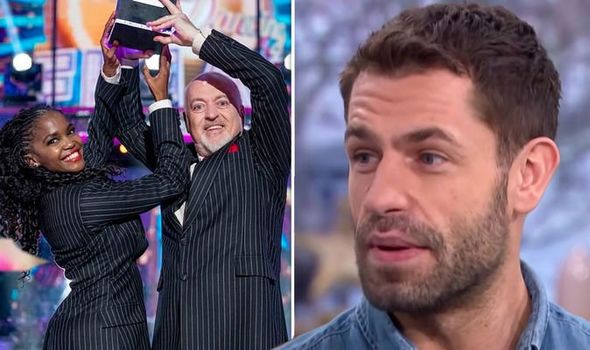 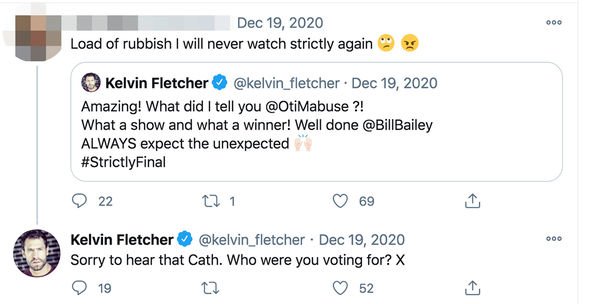 Responding to the Strictly viewer, Kelvin commented: “Sorry to hear that Cath. Who were you voting for? X.”

One wrote: “I think Bill did deserve it, he has never danced or had any training so to be able to dance like that and improve week after week, isn’t that what it’s all about!! Well it is in my eyes.”

A second commented: “Bill was incredible!” 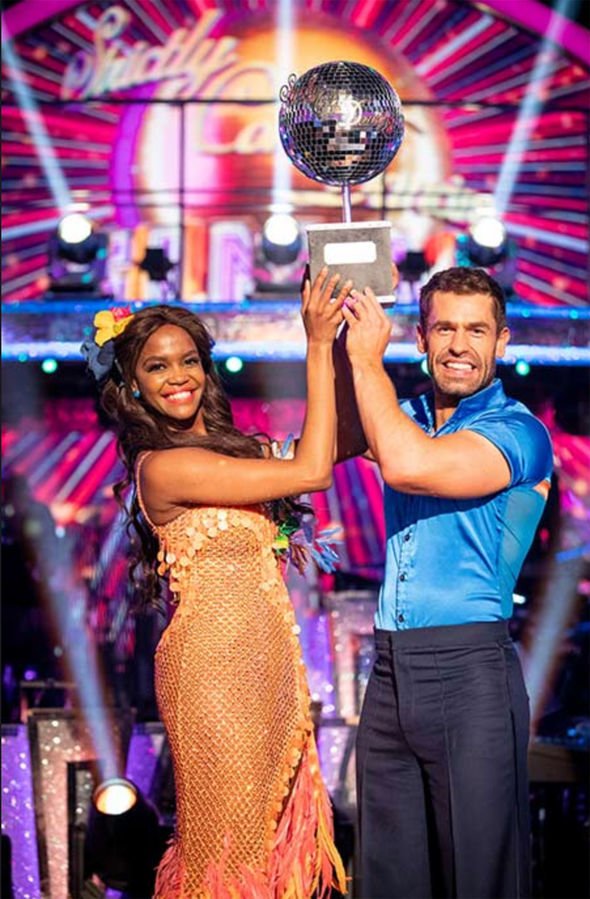 “Bill was fantastic,” a third penned. “He had my votes. So pleased for Oti, she choreographed some fabulous routines for him.”

Kelvin expressed his support for Bill and EastEnders star Maisie Smith in the final.

The Emmerdale actor said Maisie, who danced with Gorka Marquez, was the “best dancer” on the show.

Kelvin joined the 2019 series as Jamie Laing’s replacement after he pulled out with an injury.

Jamie returned to the show last series and made it to the final with his dance partner Karen Hauer.

Following his stint on Strictly, Kelvin discussed life in lockdown with his wife Eliza and their two children.

He told Hello! Magazine: “After an intense four or five months of regular family life being disrupted, to be at the other end of the spectrum, where I’m constantly at home – in a weird way, it couldn’t have come at a better time for me and Liz, and for the kids.

“We look back on the whole Strictly experience fondly, one we experienced as a family together.

“We’ve been together for many years and we’re so happy with each other, in our little bubble.”

Kelvin has since been announced as a new cast member in BBC show Death In Paradise.

Tonight, he will also put his skills to the test in Celebrity Catchphrase.

Teasing a clip from the show on Twitter, Kelvin joked he does “get better” after failing to guess the catchphrase on screen.