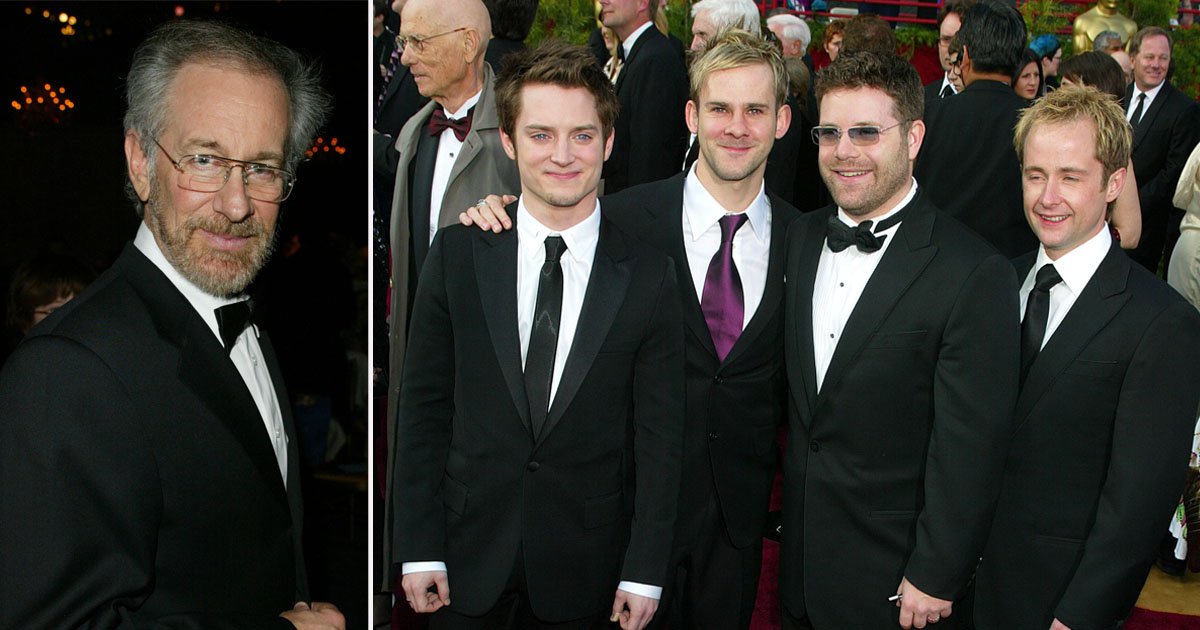 Lord of the Rings star Dominic Monaghan recalled a very special moment with Steven Spielberg at the Oscars at the height of the success of director Peter Jackson’s films in the early 00s.

Return of the King, the finale to the the critically-acclaimed trilogy based on JRR Tolkien’s books, cleaned house at the Oscars in 2004 picking up 11 wins including best director, best film and best costume design.

Asked what memory from that whirlwind time stands out, Dominic – who played the hobbit Merry – said meeting Spielberg was up there. Totally understandable.

He told Metro.co.uk: ‘On Oscar day, Peter Jackson had really got behind making sure that the four hobbits were invited to that final Return of the King Oscar day, which happened. We all met up the four of us and went down the red carpet together and there seemed to be a great reaction to the four of us showing up.

He added that he didn’t expect to be stood on stage with Peter as he bagged one of the biggest trophies of the night, and little did he know things were going to get even wilder.

The Lost star said: ‘We got on stage after we won and Steven Spielberg came over the four of us and he said, “My grandchildren will be so excited I got a chance to meet you” and I remember just thinking, “That is one of the most extraordinary things I’ve ever heard”.

‘I think that encapsulation of the peak of the Oscar ceremony was a really brilliant moment for us all.’

Dominic has teamed up with his co-star and BFF Billy Boyd, who starred as Pippin in the fantasy trilogy, to launch podcast The Friendship Onion, looking back at that incredible time working on Lord of the Rings.

However it will also be a dive into their long-running friendship that is still going strong, as well as other interests or developments in their lives.

They are still close with lots of members of the crew from the trilogy and for fans who were wondering, the four hobbits, also including actors Elijah Wood and Sean Astin, are still tight and regularly meet up. Elijah, who starred as Frodo, was recently a guest on the podcast.

‘We’ve taken vacations together, we still do, or we go and see a new movie or we open and read a book at the same time,’ Billy explained of his relationship with Dom.

‘So we’re exploring that, our lives, our friendship. Dom said we’re “pulling away the layers”. I said, “Yes like an onion. Like a friendship onion.”‘ And the name stuck.

The Scottish actor continued: ‘I mean the hobbits are really still friends, and we all live relatively close to each other.

‘Before Covid times, we would meet up and have lunch, and we’re just starting to talk about doing that again. Then of course Orlando [Bloom] is always part of our lives and Viggo [Mortensen] as well, whenever he comes.’

He added: ‘Those movies really did have a huge effect on the people involved in a way that nothing else I’ve worked on has.’

The pair have no problem being forever linked to three culturally game-changing films, and the Master and Commander actor has loved hearing fans’ thoughts about it over the last 17 years – good and bad.

Billy laughed through one brilliant anecdote: ‘It was on a plane, and I was up near the back, say I was in row 34, and a guy walked up from like row six through everyone waiting to get off and he says, “You were in Lord of the Rings” and I went “Yeah” and he went, “I didn’t like those.”

‘He walked all the way up to tell me! What a character, eh?’

The Friendship Onion is out every Tuesday across all podcast platforms.

For more stories like this, check our entertainment page.

Follow Metro.co.uk Entertainment on Twitter and Facebook for the latest celeb and entertainment updates. You can now also get Metro.co.uk articles sent straight to your device. Sign up for our daily push alerts here.