The N.B.A. has fractured into an assortment of tag teams vying for the crown, while general managers keep their eyes peeled for who is next to ask out. Superteams are now dynamic duos. It’s not the Avengers fighting Thanos anymore — Batman and Robin are taking on Poison Ivy and Mr. Freeze.

A wild — by any measure — off-season has changed the landscape of the league.

LeBron James and Anthony Davis are in Los Angeles. Kawhi Leonard and Paul George are there, too. Kyrie Irving and Kevin Durant are in Brooklyn.

And let’s not leave out the Warriors. Even though Klay Thompson will miss several months of the season with an injury, they still have a powerful pairing of their own: Stephen Curry and Draymond Green.

But the question is: Will any of these duos actually work?

There is a strange perception that James had a down year last season in Los Angeles, in spite of his recording more points, rebounds and assists per game than his career averages. Consistent greatness has caused James to, in a way, be taken for granted, and recency bias — meaning a James-led team missing the playoffs for the first time since the Bronze Age — has shaded his personal success.

But make no mistake: Anthony Davis in his prime is the best teammate James has ever had, and we are going to be reminded why James is one of the greatest basketball players in history. Davis is better than Dwyane Wade at 29, Kyrie Irving in his early 20s, and Shaquille O’Neal at 37. He is an exceptional player on both ends of the floor. But it is around the rim where Davis does most of his damage, finishing better than 70 percent within five feet of the basket.

James and Davis will be a lethal pick-and-roll combination.

Fresh off a championship, Leonard will play with the best teammate of his career, as well. (Before you throw a chair, Tim Duncan wasn’t in his prime when Leonard was with him on the San Antonio Spurs.) Both Leonard and George have made multiple All-Defensive teams. Top scorers will have to go up against one or both of these two for 48 minutes, not including the professional annoyance that is Patrick Beverley.

Leonard and George immediately turn the Clippers into a juggernaut. Offensively, George and Leonard have different games that should complement each other. George is more of a long-range bomber (9.8 3-point attempts a game last season) and Leonard has the stronger midrange game.

Even if they take some time to feel each other out on that end of the floor, who is scoring on them? 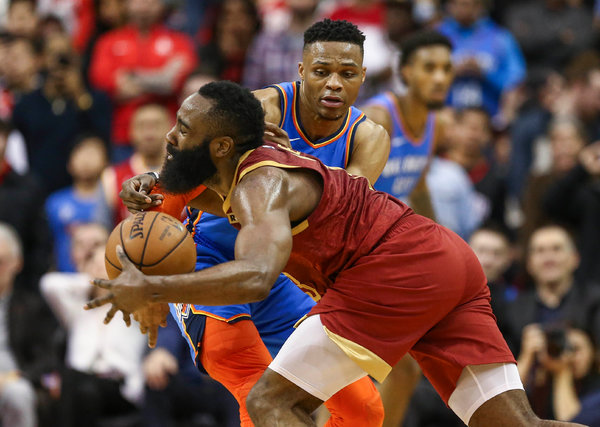 Durant (Achilles’ tendon) is most likely out for most, if not all, of next season. But once he is healthy, the Nets may still have a problem.

Irving and Durant are both ball-dominant, scoring-focused players. In spite of how bizarre his last year with Boston was, Irving put up the best numbers of his career — and showed a willingness to create for others, averaging a career-high 6.9 assists. The ball has a tendency to stick to Irving’s hands, though, especially late in games. Because of his exceptional ball-handling ability, Irving thrives in isolation: 63 percent of his field goals last season were unassisted. (In contrast, Durant, another player who enjoys playing in isolation, scored only 51 percent of his makes unassisted.)

Durant can score anytime and anywhere in any number of ways. And he knows it. How will he react when Irving pulls up for a 3-pointer with 20 seconds left on the shot clock, even though Durant is open? Durant and Irving are known to be temperamental when things don’t go well. Will they be patient about who is handling the reins on offense? Will they opt for hero ball?

Coach Kenny Atkinson has built a culture of sharing in Brooklyn. But if Irving wouldn’t buy in with that culture in Boston, is there any chance he does so with the Nets?

Irving’s history tells us: no.

No N.B.A. star’s stock plummeted following the playoffs the way Westbrook’s did after another first-round exit. His critics went after his shot selection, ball dominance and demeanor. But people have forgotten just how good Westbrook is.

He’s undeniably one of the best players in the league, an exceptional playmaker and an elite rebounder. That matters. It was clear that Chris Paul and Harden didn’t enjoy playing together in Houston, so something had to change. Westbrook is the change.

Like Irving and Durant, this is a risky pairing: Two alpha dogs who have changed how traditional basketball is perceived, even while being criticized as ballhogs. But each is motivated to prove doubters wrong.

Westbrook’s defense is suspect. His shooting is nonexistent, even though his shots aren’t. The Rockets’ offense, for the last couple of years, has been based on isolations and 3-point shooting. That will have to shift to accommodate Westbrook’s open-floor ability (and his weakness from outside).

At a base level, two former most valuable players in their primes are playing together in a wide-open league. The Rockets will be good next year. But good enough? That’s the question.