There are many simple joys of Halloween, from decorative gourds to candy. But this year is especially sweet because it’s the first Halloween fans have had Disney+ at their fingertips. For once, viewers are not reliant just on Freeform for their yearly Hocus Pocus fix. Even better, there are tons of Disney Channel classics for a full spooky season marathon. But could these Disney films actually all be one Halloween Cinematic Universe? This TikTok about Hocus Pocus and Halloweentown‘s connection suggests fans should be watching more closely.

Released back in 1993, Hocus Pocus is an early forerunner of the types of films that eventually begat High School Musical. The movie was written by HSM‘s director, Kenny Ortega, and starred Bette Midler, Sarah Jessica Parker, and Kathy Najimy as witches Winnie, Sarah, and Mary Sanderson, resurrected in Salem, Massachusetts on Halloween night. It was initially a flop, but it’s become a stone-cold childhood classic, the type of Halloween fare for anyone who needs their films to come complete with a magical rendition of "I Put A Spell On You."

Halloweentown, on the other hand, was not a big-screen film, but rather a made-for-TV movie for the Disney Channel, starring Debbie Reynolds as a witch from Halloweentown, and Kimberly J. Brown as her granddaughter Marnie, a 13-year-old who just discovered her magical abilities. It came out in 1998, five years after Hocus Pocus, and spawned an entire franchise: 2001’s Halloweentown II: Kalabar’s Revenge, 2004’s Halloweentown High, and 2006’s Return to Halloweentown. 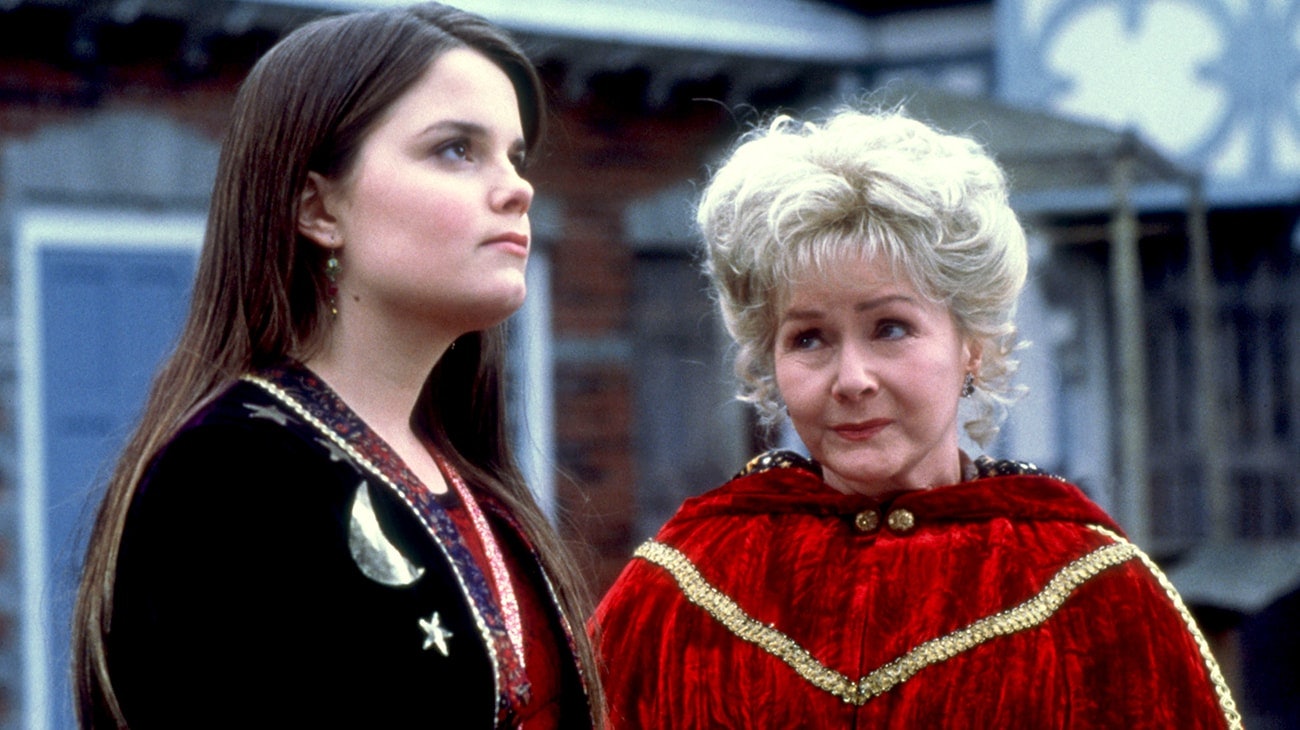 As the TikToker notes, Halloweentown II ends with Marnie’s sister Sophie (Emily Roeske) running around the streets of the magical land, casting a spell that brings the life (and color) back into its residents. As she passes by one witch who flairs back to life, fans see she’s wearing a red sparkly dress and purple robe… which just so happens to be the same costume Parker’s character Sarah Sanderson wore in Hocus Pocus.

Now, the obvious answer is that a decade-old costume from a flopped film was hanging around the closets at Disney, it just so happened to fit one of the extras, and no one thought twice about reusing it for a one-and-done TV film. After all, no one in 2001 ever dreamed both these films would sit side by side on streaming for Disney- and Halloween-loving fans to watch dozens of times every year.

But maybe, just maybe, someone in the costuming department thought putting a Hocus Pocus easter egg in the Halloweentown franchise was the best idea around. With Disney+ already having commissioned a Hocus Pocus sequel, perhaps fans will discover it’s more than just a passing reference, and the Sandersons have decamped to Halloweentown for some year-round spooky living.