1.After sacking the city of Antioch in 540 CE, Sasanian Emperor Khosrow I built a new city that looked almost exactly the same and called it “Weh Antiok Khusrau,” which translates roughly to “Khosrow Made This City Better Than Antioch.” 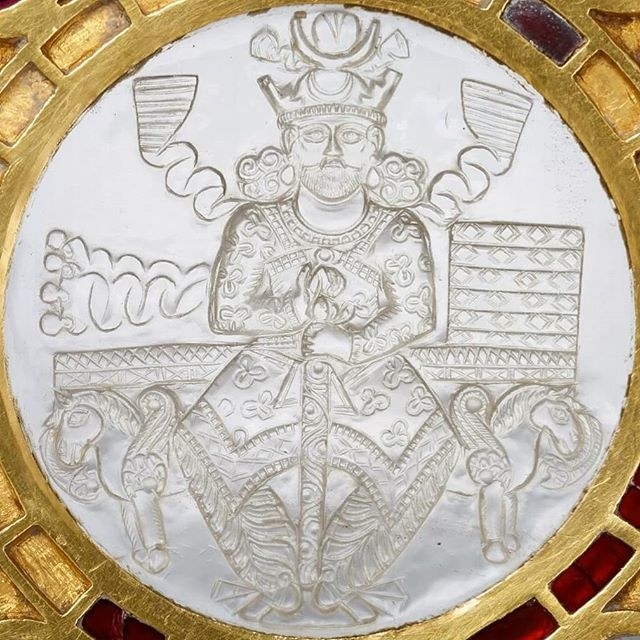 Not only that, but when the original Antioch was destroyed, all of its remaining citizens were relocated to the “new” Antioch.

2.At the 1904 Olympics in St. Louis, the marathon was a total mess: The first place finisher did most of the race in a car, the guy in second almost died from eating rat poison, and the fourth place finisher raced in dress pants and shoes, and took a nap by the side of the road for part of the race. 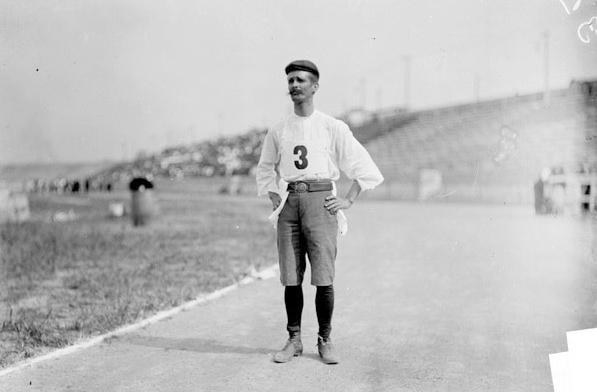 First off, the entire course was very dusty and breathing in that dust caused all kinds of injuries, including one runner who was hospitalized with hemorrhaging after the dust tore his esophagus and stomach lining. The organizer of the race purposefully withheld water in order to test the effects of dehydration. So the whole thing was a nightmare from the start.

That first-place finisher, Fred Lorz, hitched a ride in a car to the end of the course after he was struck with serious cramping. He got out shortly before the finish line and crossed it, which fooled some of the onlookers. He claimed he did it “as a joke.”

That second-place finisher, Thomas Hicks, was given a mixture of egg whites and strychnine, a poison that is often used to kill rodents or birds, as an attempt at a performance-enhancing drug. He was carried across the finish line by his handlers.

That fourth-place finisher, Andarín Carbajal (pictured above), was a Cuban national who raised money to attend the Olympics by running the entire length of Cuba. He gambled away all the money when he arrived in the States, and showed up for the race in dress clothing. Thankfully, another runner used a knife to cut his pants into shorts. Carbajal stopped at a roadside orchard for a snack during the race, but the apples were rotten so he was struck with stomach cramps and had to sleep it off.

3.There was a cat who started in the Nazi navy in WWII, then became a ship’s cat in the British Royal Navy, and survived three sinking ships during his naval service. 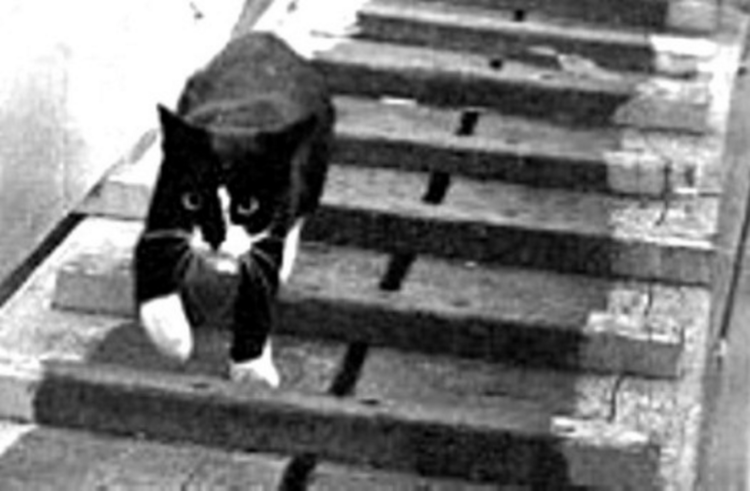 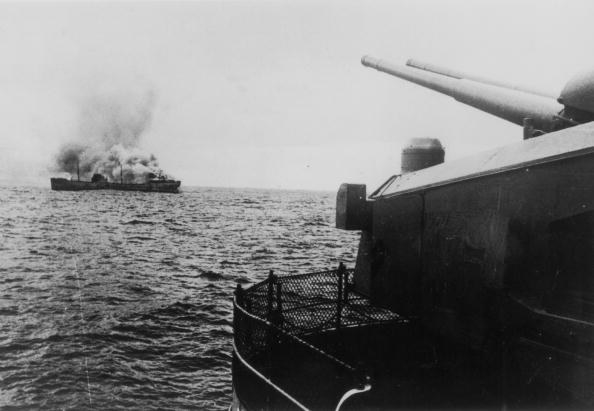 “Unsinkable Sam” was the nickname given to this cat, who was actually named Oscar. He started as a ship’s cat aboard the Nazi ship Bismarck, which was sunk by the British ship HMS Cossack in 1941. The British crew found the cat floating on a board hours after the ship sank, took him aboard, and named him Oscar.

Later in the war, the Cossack sank after being hit by a torpedo, killing 159 crew members. Oscar survived again and was rescued along with the remaining crew, and given the nickname “Unsinkable Sam.” His last service was aboard the HMS Ark Royal, an aircraft carrier that was ALSO torpedoed, this time by a Nazi U-boat. Oscar survived that attack as well, and afterward retired to Belfast, where he lived in a seaman’s home. Oscar died in 1955, a full 14 years after the sinking of the Bismarck.

4.Khutulun, a descendant of Genghis Khan, refused to marry unless her suitor could beat her in a wrestling match. Nobody ever defeated her. 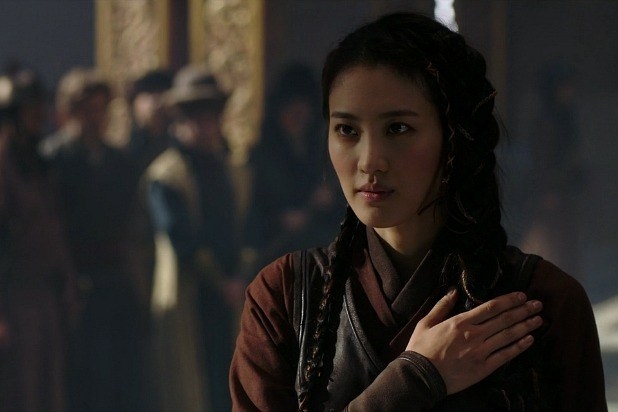 Each time a suitor wanted to challenge Khutulun, she required them to wager some of their horses in case she was the winner. It’s said that she had thousands of horses, possibly even up to ten thousand, as a result of her many victories.

A version of Khutulun (played by Claudia Kim, pictured above) appears as a character in Netflix’s Marco Polo, as the explorer met and wrote about Khutulun in his travels.

5.The Polish army enlisted a bear as a soldier during WWII. 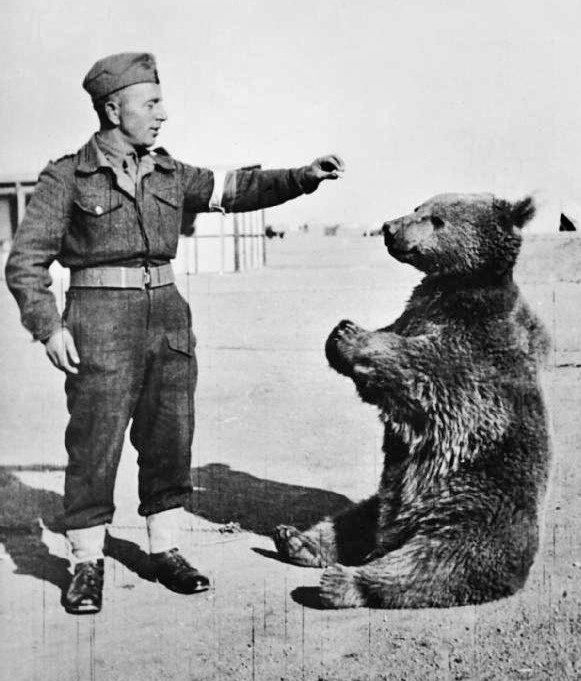 Polish soldiers found a bear cub, whose mother had been killed by hunters, by the side of the road. One of the soldiers took the bear in and named him Wojtek, and he was trained in part by a civilian refugee. Wojtek was eventually enlisted as a soldier in the Polish army in order to get him on a British transport ship and given his own paybook, serial number, and rank (he was a private). He would often sleep in bunks with the other soldiers, and he was said to be very fond of beer and cigarettes. He even performed actual work by helping transport supplies, including heavy boxes of ammunition.

After the war, he was placed in the Edinburgh Zoo where he lived out the rest of his days until he died at age 21.

6.A woman named Violet Jessop survived not only the sinking of the Titanic, but also the destruction of BOTH of the Titanic‘s sister ships. 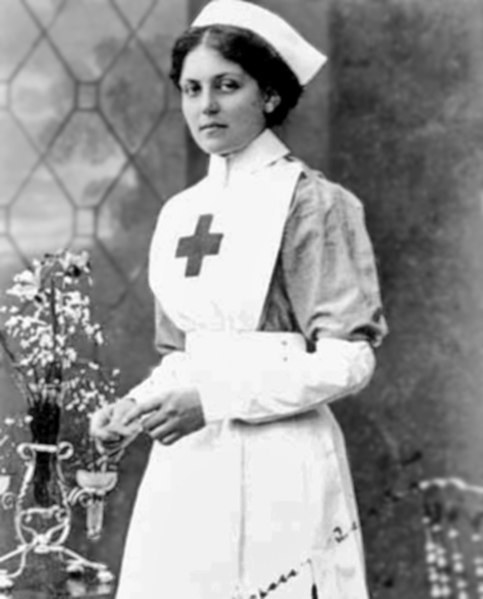 Jessop was a stewardess aboard the RMS Olympic, one of the Titanic‘s sister ships, when it collided with another ship in September of 1911. The Olympic was damaged, but made it back to port with no casualties. Less than six months later, Jessop was aboard the Titanic, again as a stewardess, when it sank. After that, Jessop became a stewardess for the British Red Cross and served aboard the HMS Britannic during WWI. There was an unexplained explosion (thought to be a deep-sea mine), causing the boat to sink quickly. Jessop had to jump out of the lifeboat she was on in order to avoid being sucked under the ship’s propellors, and suffered a head injury in the process.

Despite all this, she returned to work for the same shipping company, White Star, about four years later.

7.Robert Liston, a surgeon in the 1800s, performed an operation with a 300% mortality rate: Instead of saving the patient, he killed three people. 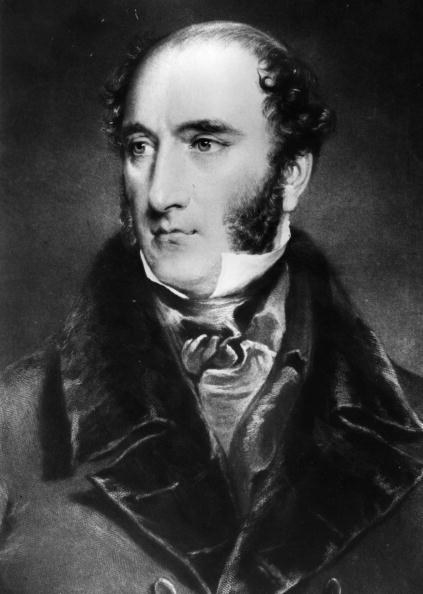 Liston was renowned for being one of the fastest surgeons alive, which at the time was a very good thing. Anesthesia as we know it didn’t exist, so patients were awake for the entire procedure, meaning the shorter it was, the better.

Liston was performing a leg amputation, but worked so fast that he accidentally cut off two fingers on his assistant’s hand. Both the patient and the assistant died later of gangrene, most likely due to the saw being unclean.

What about the third death? Well, doctors and other spectators would often watch these surgeries from the gallery, which was much more up close and personal than medical galleries today. During the procedure, Liston accidentally swiped near an elderly doctor with a blade, slicing the fabric of the doctor’s suit coat. Thinking he had been cut open, the doctor went into shock and died of a subsequent heart attack. Thus, three people died during an operation that was meant to save one life.

8.Twice, the US and the USSR were likely saved from all-out nuclear war by just one person. 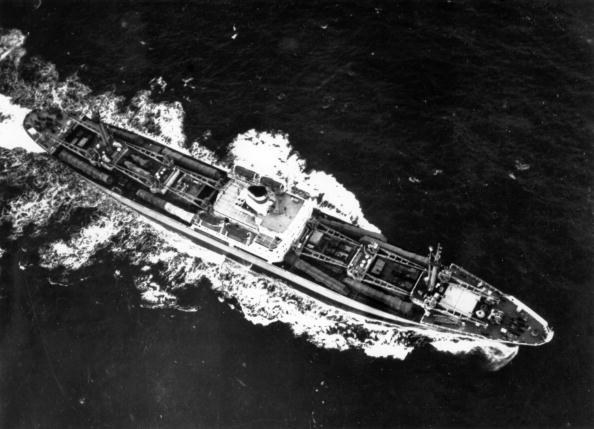 The first incident was in 1962 during the Cuban Missile Crisis. Soviet Vice Admiral Vasily Arkhipov was on board a nuclear sub near Cuba. They were unable to pick up any incoming radio signals, so they were unsure whether war had broken out or not. Ultimately, there was a vote among three officers on whether or not to launch a nuke, with Arkhipov being the lone “no” vote.

In 1983, during the Cold War, a single Soviet lieutenant colonel by the name of Stanislav Yevgrafovich Petrov avoided nuclear war by correctly identifying a false alarm with the Soviet missile detection system. A freak occurrence involving sunlight reflecting off of high-altitude clouds confused the satellite system, causing it to indicate that there were five incoming missiles, assumed to be American. Petrov reasoned that if the US was initiating nuclear war, it would likely be an all-out attack and not just five missiles, so he correctly — and against military orders — determined it to be a false alarm, preventing a retaliatory launch by the USSR.

9.An entire town in Nevada basically invented the concept of the “Wild West” by staging gunfights, bank robberies, and other Western cliches from 1800s dime novels. 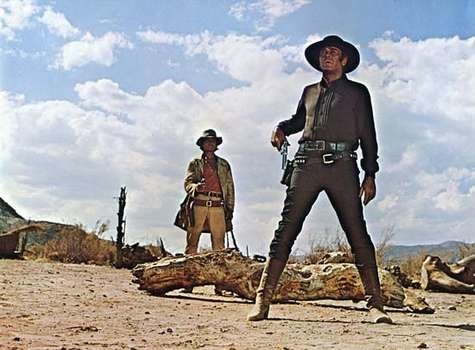 The town of Palisade, NV — like many other “Wild West” towns of the time — was actually very peaceful and had so few crimes that it didn’t even have an official sheriff. But the town decided to make things seem more exciting there after the Transcontinental Railroad opened in 1869 and passed through Palisade. As the story goes, a train conductor mentioned that railroad passengers were often disappointed at how these quiet towns were so different from how they were portrayed in Western dime novels. So, the people of Palisade decided they would stage Western-style shootouts in the street, bank robberies…you name it. Everyone was in on it, even the US Cavalry and a local Native American tribe, who would stage battles against each other for the entertainment of the passing railroad travelers.

Maybe it was a way to drum up more tourism. Or maybe it was just so the people of Palisade could have a good laugh at the city-folk.

10.Ernest Hemingway’s younger brother started his own country on a raft in international waters near Jamaica and named it New Atlantis. 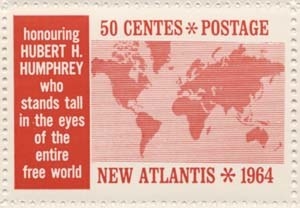 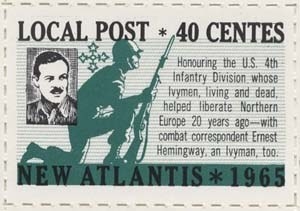 Leicester Hemingway sailed a barge made mostly out of bamboo, roughly 8 foot by 30 foot, out to sea and declared it a micro-nation that was half independent and half part of the United States. Hemingway referenced an obscure law, the Guano Islands Act of 1856, to do this: The law stated that US citizens could claim ownership (under the United States) of unclaimed islands that had guano deposits. It’s unclear whether Hemingway involved any actual guano (bird or bat droppings) in the process. He even typed up a constitution, which was just a copy of the US Constitution with any occurrences of “United States” replaced with “New Atlantis.”

The plan was to use the publicity of the act to raise money and have the raft serve as an oceanographic research facility, but unfortunately a tropical storm destroyed New Atlantis in 1966, two years after it was created.

11.“Mad Jack” Churchill, a British Army officer during WWII, was famous for going into battle with a longbow, a broadsword, and his bagpipes. 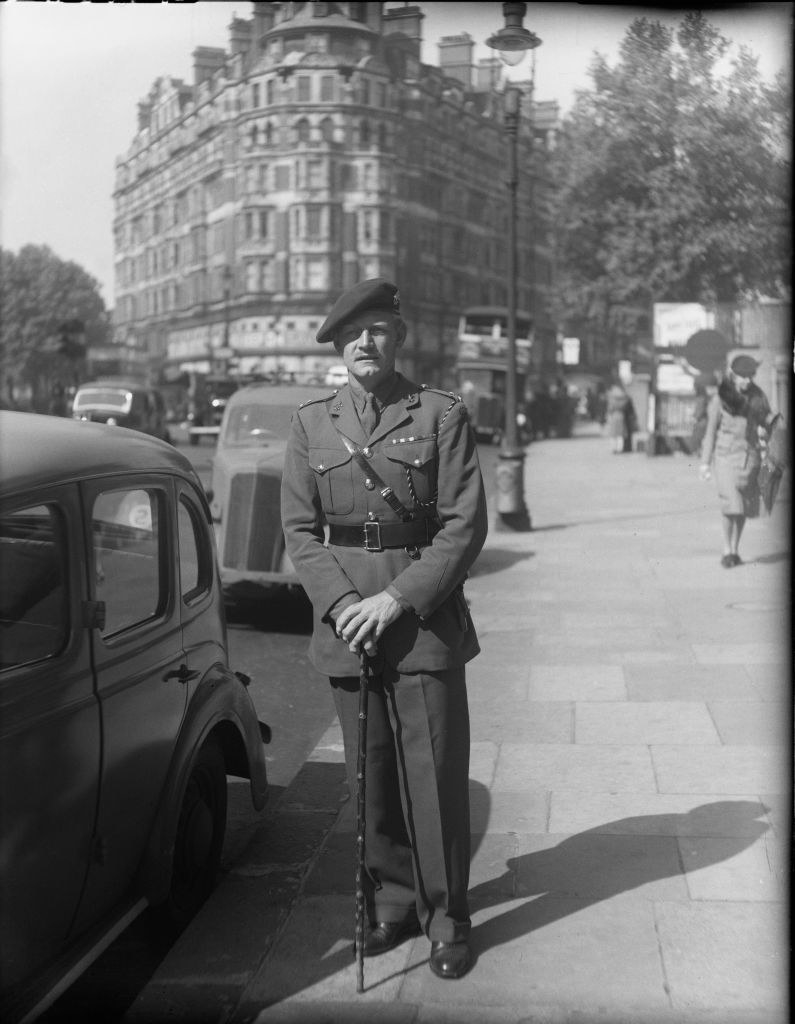 Churchill participated in a number of raids throughout the war, including one in Norway where he jumped off the landing craft playing “March of the Cameron Men” on his bagpipes before throwing a grenade and charging into battle. In 1944, he was captured in Yugoslavia after the rest of his command was injured or killed by mortar fire. As the last man standing, Churchill played “Will Ye No Come Back Again?” on his bagpipes before being knocked unconscious by a grenade.

He was taken to Sachsenhausen Concentration Camp, but escaped along with a Royal Air Force officer shortly after. Both of them were recaptured and remained at the camp until the next year, when German soldiers overthrew the SS and released the prisoners at the camp.

After the war, Churchill retired and appeared as an extra in the 1952 movie Ivanhoe.

12.At one point, the makers of Pepsi had the 6th largest military in the world. 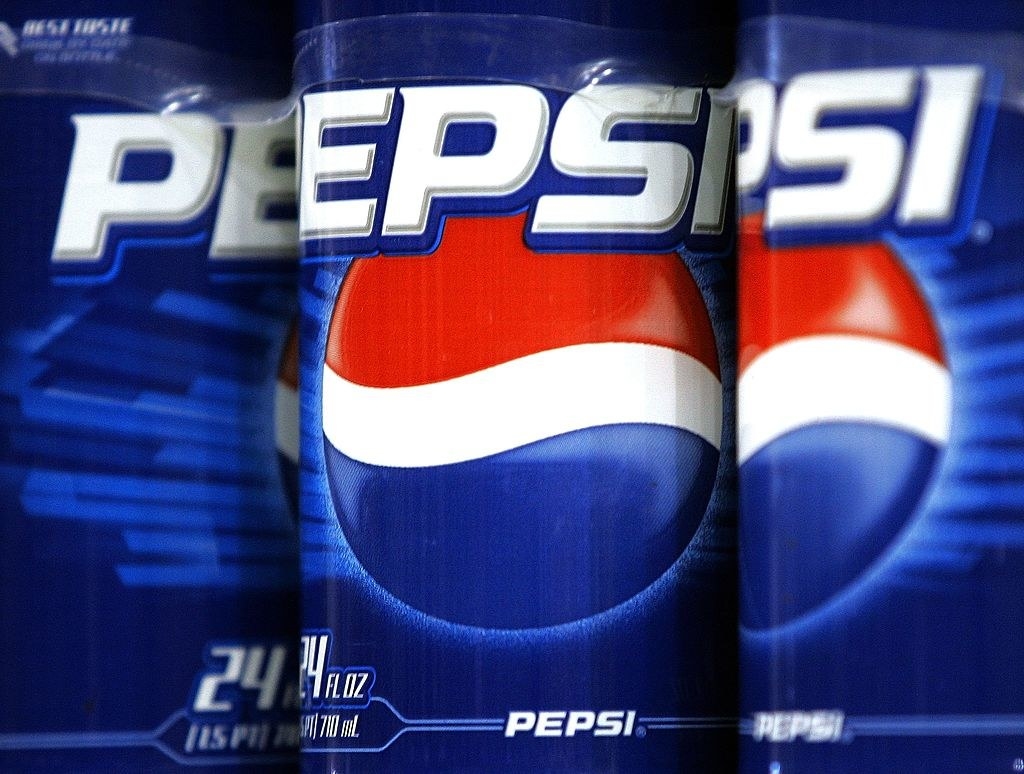 The vice president of PepsiCo attended an American “exhibition” in Moscow in 1959 as part of an effort to convince the Soviet Union of the benefits of capitalism. Apparently Pepsi was a big hit, but there was a problem: Soviet money wasn’t generally accepted worldwide. So the USSR bought billions of dollars worth of Pepsi by trading submarines, military ships, and a lot of vodka for the soda. For that brief time, PepsiCo had the 6th largest military in the world, until it sold all of the ships and submarines for scrap recycling.