Last month, I did something I used to do often before the pandemic: I watched a rehearsal. But this time it wasn’t a matter of sitting in a concert hall and watching a group work onstage.

Sixteen instrumentalists from the contemporary music ensemble Alarm Will Sound were scattered across several states and four makeshift home offices and professional studios, working with Tyshawn Sorey on his “Autoschediasms.” To synchronize everyone’s efforts, each “pod” of musicians was simultaneously logged into two different internet conferencing applications.

One web browser tool, LiveLab, used the rectangular, talking-head format familiar from months of Zoom. But since video conferencing is rife with delays in sound signals, not to mention less than stellar quality, the musicians’ microphones were separately fed into a mixing board on the higher-fidelity audio program Jamulus.

Participants muted themselves on LiveLab and played (or asked questions) over Jamulus. Alarm Will Sound’s technical team fixed connectivity problems on the fly. It was an ingenious, if occasionally awkward, way of bringing this top-flight ensemble together safely — without sacrificing too much audio quality.

Oh, and one more wrinkle: There was no set score in front of the players — or in front of Mr. Sorey, the composer, conductor and improvising multi-instrumentalist, who was in a studio in Philadelphia, surrounded by a half-circle bank of computer monitors and web-conferencing cameras.

Instead, before Mr. Sorey’s first downbeat was visible on LiveLab, he could be seen scribbling signs and signals on index cards. “Autoschediasms” (pronounced auto-SKED-ee-AZ-ums) is, in fact, not even a discrete work, but refers to his idiosyncratic process of spontaneous, interdependent group composition. (Pre-pandemic, he used whiteboards to get the instructions across.)

The abbreviations and coded signals on Mr. Sorey’s index cards gave shape to a performance realized through improvisational means, yet bounded by the composer’s quick-responding ear. Mr. Sorey might show a collection of signals to all four pods, or to just one; while instructing one group to repeat some spontaneous material that he had just heard and liked, he might then direct another group to play contrasting, new material. (Mr. Sorey cites conducting systems pioneered by Butch Morris and Anthony Braxton as influences on his own process.)

I’d seen ensembles work with Mr. Sorey in this manner. But the music he and Alarm Will Sound achieved with its jury-rigged patchwork of tech tools was alternately raucous and peaceable — sometimes suggestive of his small-ensemble work in jazz clubs as a percussionist and bandleader, but always controlled. 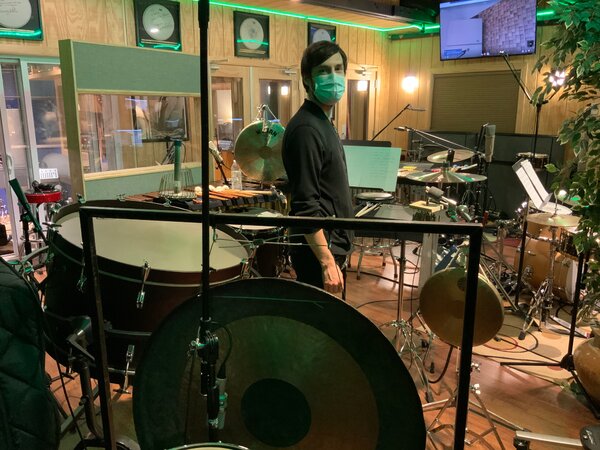 Perhaps even too controlled, for Mr. Sorey’s taste. During a feedback session between rehearsal takes, Mr. Sorey invited the musicians to “challenge” him. “It’s OK to play something super loud, and let something rip, or whatever,” he said. “Because I might enjoy it.” When they came back for the next take, the “Autoschediasms” sound was even more varied and scorching.

A subsequent filmed 24-minute performance — available on Alarm Will Sound’s YouTube account as the latest in the group’s Video Chat Variations series — has some clearly discernible dramatic pivots. At the outset, delicate darts from an oboe are laid atop starkly droning strings. Multiphonic effects from clarinet and bass clarinet gradually add to the density. In the seventh minute, spiraling patterns from the piano help foster a turn away from the thick, storm-cloud timbral environment, and toward a newly melodic approach. After a piano cluster chord detonates near the midpoint, there is a brief turn toward jazzlike suavity, including pizzicato bass and some stellar muted trumpet. After a peak of momentum, the final minutes find the group relaxing into more meditative, minimalist moods.

The performance sidelines the group’s regular conductor, Alan Pierson. But along with the managing director, Gavin Chuck, Mr. Pierson is the one who helped spearhead the group’s technical operation for a time of quarantine. And his interest in improvisation first brought Mr. Sorey into Alarm Will Sound’s repertoire last year.

“He’s throwing all these signs at people,” Mr. Pierson said, “and any time anyone misinterprets a sign, he is on it.

In the ensemble’s released version of “Autoschediasms,” the low-lit cameras make things seem a bit more melancholy than what I observed during rehearsals; there aren’t many smiles visible. But the companionability of the collaborators was also clear, during interviews, after the September rehearsal.

“One thing I really like about Tyshawn’s method is he creates a level playing field,” Erin Lesser, a flutist, said. “He demands that every player jump in and be bold. So we’re all beginners and we’re all experts in what we bring. And I love that he doesn’t have any preconceived notions, like, ‘this person plays jazz’ and ‘this person is more classical.’ He doesn’t know any of that, and he doesn’t care.”

The crisp videography and editing conveys how Mr. Sorey presides over all this activity. It also preserves some mystery, since many of his glyphs and codes run slightly off frame, or are overexposed.

That might be intentional. Mr. Sorey and his music tend to avoid detailed explanations and to foster a sense of exploration. In a brief interview, he described his role in “Autoschediasms” as both “composer and co-composer.” He wants the group to take responsibility for the creation of each performance — an ambiguity that can sound almost like a dare to classical music’s traditional structures and hierarchies.

“Musicians, sometimes they make a mistake,” he said. “When something is done, that’s a challenge to me, to make something musical out of it. The question is not how you got there. It’s how you get out of it.”

It’s not that Mr. Sorey is against a more typical assignment of roles or division of labor. Two major orchestras are preparing works of his for livestreamed premieres in November — a violin concerto in Detroit and a cello concerto in Seattle — and he is scheduled to contribute early next year to Opera Philadelphia’s digital season. Alarm Will Sound has also been working on a socially distanced studio recording of a fully notated Sorey score, “For George Lewis.”

But this cultivation of multiple working methods — for performers as well as listeners — is an integral part of his art. You might approach this latest video release with that in mind. On a first pass, you might watch “Autoschediasms,” to appreciate the creativity of Mr. Sorey’s conducting, the work of the individual players, as well as the superb technical coordination of Alarm Will Sound’s production team. But the second time you press play, you might choose to close your eyes, and just listen.