It’s hard to choose the right word to describe Shinichi Sawada’s spiky, totemic sculptures. His earth-toned ceramics — which often have horns and claws, as well as multiple faces stacked atop one another or ringing the sides — could be beasts, except they’re not very menacing. I’d say monsters, but neither do they inspire fear. They’re not quite animals or spirits. “Creatures” may be the most apt — it speaks to the interplay between natural elements and feats of imagination.

Sawada, who is autistic, makes ceramics at a social welfare facility in Japan. His breakout came in 2013, when the curator Massimiliano Gioni included some of his pieces in the Venice Biennale. This exhibition at Venus Over Manhattan is his first solo show in the United States. 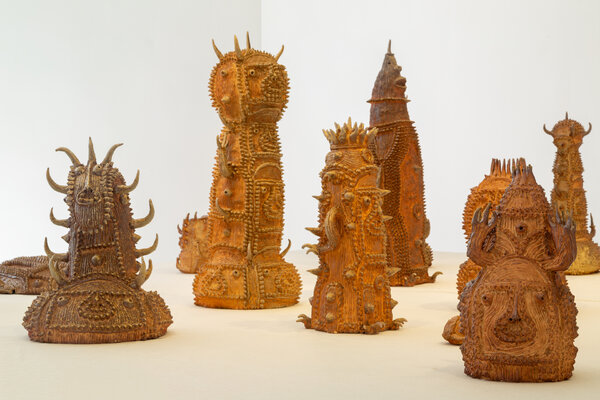 Along with his work, Sawada himself is frequently presented as a subject of fascination: a mostly nonverbal artist who works intently from an internal vision. That may be so, but his sculptures are rich with allusions. The cartoonish, sometimes possessed looks of his creatures recall imagery from Japanese mythology and medieval bestiaries. The spikes and lines covering their bodies suggest ritual scarification. The big eyes and gaping mouths of more recent pieces echo shamanistic masks from a host of cultures.

This is what makes Sawada’s works so compelling: They evoke other things while being unlike anything else. “Untitled (126)” (2010) reminds me of a tree, a fire hydrant and a bird, but ultimately it’s none of those — only an object of carefully wrought mystery. Like much so-called outsider art, Sawada’s sculptures are made in isolation, but they gain resonance and meaning in the wider world. JILLIAN STEINHAUER

“Other Matters, a strange but beguiling two-person show at the tiny Situations gallery in Chinatown, pairs a suite of bold paintings by the young Brooklyn painter Sophie Larrimore with three pieces of stone sensuously carved by Jerry Torre, a Queens-based sculptor in his mid-60s better known as Jerry the Marble Faun. (He was nicknamed after the Nathaniel Hawthorne novel by Edie Bouvier Beale, a heroine of the 1975 documentary “Grey Gardens,” for whom he worked as a handyman.)

Larrimore remixes half a dozen French painting styles, chiefly pointillism, to make her otherworldly garden scenes. Blue and purple women with stylized faces and circular breasts look after pink poodles and stretch out as if dead or impersonate the Egyptian sky goddess, Nuit. Nearby, the Marble Faun shapes limestone and alabaster into intricately frilled but only tenuously figurative shapes. One is a blocky dragon’s head; another looks more like a half-melted candle.

Where the artists meet, aside from oddity of style, is in a kind of animism. If Larrimore’s women don’t quite look alive, it’s because their life force has diffused into the landscapes around them, or even into the rough weave of her canvases, clearly visible through unvarnished paint. The Marble Faun’s sculpture, similarly, at once rough and ornate, leaves plenty of room for viewers to appreciate the stone’s own numinous warmth. WILL HEINRICH

Large metal gongs, dried gourds, shells, animal horns, sound bath performances and small, colorful “retablo” devotional paintings are among the works and materials you’ll find in “Guadalupe Maravilla: Seven Ancestral Stomachs,” at PPOW. The exhibition draws from Maravilla’s experience as an unaccompanied minor migrating to the United States in the 1980s during the Salvadoran civil war and his later battle with colon cancer. The show’s title alludes to both the dried fleshy fruits, whose shape resembles the human stomach, and the hopeful notion that a deep spiritual cleansing could heal seven generations back and seven generations forward.

“Disease Thrower #7” (2021) is one of several tall, stately assemblages that look like totems and Mayan sculpture — this one even has animal claws at its base — and have gongs that Maravilla activates to produce healing vibrations. (You can sign up or watch a livestream through the gallery’s website.) The “Ancestral Stomach” series are wall sculptures made with dried gourds and other materials, while the wonderful retablos are deeply personal. One painting credits cucumbers for helping Maravilla during his radiation treatment; another celebrates his birthday, Dec. 12, which is also the feast of the Virgin of Guadalupe. “I canceled my performance retablo” (2021) commemorates an event that fortunately didn’t happen, since many of those who planned to attend tested positive later for the coronavirus.

Trauma and healing are clearly central here, but the show is also a reminder that children who migrate to this country grow into adults who offer extraordinary insights and contributions. MARTHA SCHWENDENER