The 20-year-old British singer and songwriter makes music that captures modern-day misery in a way that feels improbably heartening. Her debut album is due this month. 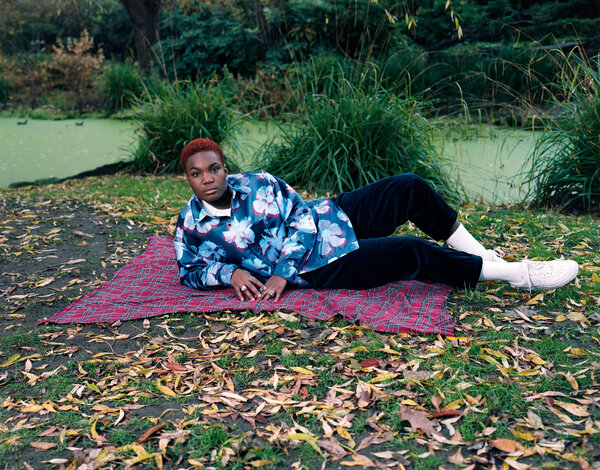 The first day Arlo Parks showed up at a London flat to work on music with the producer Luca Buccellati in 2018, she was only 17 years old. She was barely even Arlo Parks yet: The singer-songwriter had only recently plucked that name from the ether, inspired by the pseudonyms of two artists she deeply admired, King Krule and Frank Ocean, and intent on finding something a bit shorter than her birth name, Anais Oluwatoyin Estelle Marinho (or “Isa” to her friends).

“It felt strong but also a bit androgynous, which I liked,” Parks said on a FaceTime call in late November.

Buccellati had spent the morning writing and recording a tune he called “The Breakup Song,” with goofy lyrics intended mostly to amuse his roommate. When Parks arrived, he played it for her, figuring it would be an icebreaker she’d laugh at before they settled down to do some real work. “She immediately was like, ‘Whoa, just take the vocals off and give me five minutes,’” Buccellati recalled. 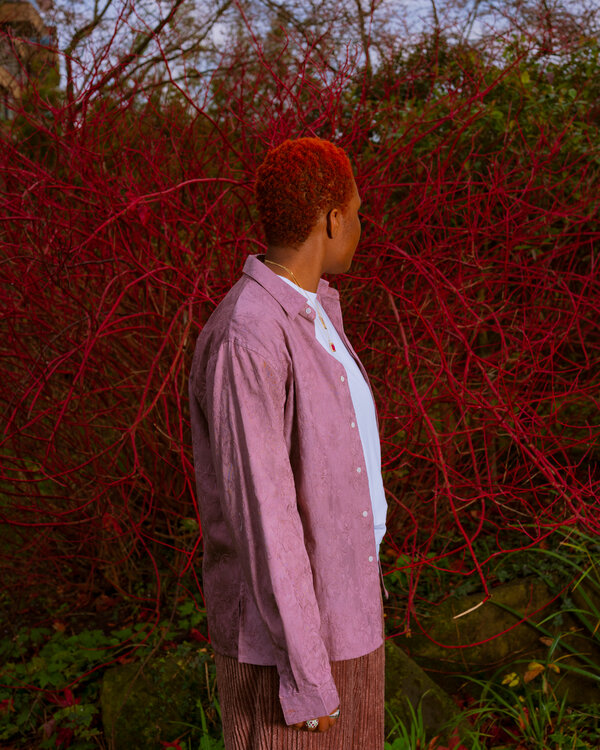 The music resonated with Parks. “I remember thinking the bass reminded me of something from ‘Voodoo’ and the drums had this crunchy ‘Low End Theory’ energy,” she said, referring to classic albums by D’Angelo and a Tribe Called Quest. She quickly jotted down lyrics, recorded both lead and harmony vocals, and, in 15 minutes, they’d finished “Cola,” a spare, hypnotic and precisely rendered snapshot of a relationship cratering. The song, Parks’s first official release, has since been streamed more than 15 million times on Spotify.

“That was a defining moment in terms of establishing the sound of Arlo Parks,” Buccellati said.

Parks hasn’t altered her process much since then. “If it’s not like a lightning bolt striking, then maybe it’s not meant to be,” she said, sitting in her bedroom in the West London home where she lives with her parents. Parks, now 20, was wearing a dark, colorfully patterned button-down shirt. Over her right shoulder, framed prints of Jimi Hendrix, David Bowie and MF Doom hung neatly in a row against a white wall. “I’m quite impatient. I’m just used to songs coming that quickly and instinctively.”

“Cola” was the first of a steady drip of singles that showcase an artist swerving among an eclectic mishmash of influences — Jill Scott, the Cure, Joan Armatrading, Tricky, the Instagram poet Nayyirah Waheed — and writing incisively about the swells of modern-day misery in a way that feels improbably heartening. It’s a talent that’s especially relevant during an era when a pandemic has locked so many in a state of anxious isolation.

“It feels like she’s always singing to you, even though she’s telling stories about herself and her friends,” said Paul Epworth, a producer who has worked with Adele, Florence + the Machine and Coldplay, and who produced two tracks on Parks’s full-length debut, “Collapsed in Sunbeams,” due Jan. 29. “Connecting people in that way, it’s a rare gift. She’s such a grounded, warm, honest, fun person to be around, but her lyrics are forged in darkness. The best artists always have that duality to them.”

Parks said that a sense of intimacy and connection is at the crux of her record: “I think during this time where the space between people is so pronounced and the chaos can feel overwhelming, the songs touch a specific, vulnerable part of people.”

The past year has been a whiplash for Parks. Her United States tour, opening for Paramore’s Hayley Williams, was scuttled by the pandemic, but her profile has risen nonetheless, aided by the endorsements of a gaggle of well-known admirers including Billie Eilish, Wyclef Jean and Michelle Obama. “Cola” was featured prominently in Michaela Coel’s celebrated HBO series “I May Destroy You,” and Parks herself starred in an episode of “Ouverture of Something that Never Ended,” an artsy mini-series co-directed by Gus Van Sant for Gucci. To have her career blossom as so many are suffering has obviously been a mixed blessing. “I’ve definitely had to work through feeling undeserving,” Parks said.

Phoebe Bridgers, who played two songs with Parks in a London church this past September for BBC Radio, has experienced a similarly timed, and therefore similarly fraught, rise. “We talked about that,” said Bridgers. “It’s depressing but also just for our own sanity, putting music out makes you feel like at least you have some semblance of a job. But I’m looking forward to the world we both step out into being different from the one we left.”

AS A TEENAGER growing up in the West London district of Hammersmith, Parks was simultaneously bookish, sporty, awkward, sad and filled with anxiety, which is to say, not too different from teenagers anywhere. She felt herself constantly watching the world around her, then struggling to process what she saw. “It was more a question of overthinking — purpose, love, what success meant, what loss meant, what I was going to do with my life,” she said. “I think living life in a way that was very observant and sensitive was sometimes stressful but made me who I am.”

Her sharp eye and gently bruised psyche have proved invaluable assets to her songwriting. “Super Sad Generation,” another product of those early sessions with Buccellati, opens with Parks coolly setting the scene: “When did we get so skinny/Start doing ketamine on weekends?” On other early songs, exacting details and proper nouns pile up: Ritalin, powder-blue walls, eating Parma Violets — a popular British candy — on the way back from therapy, the T-shirt that makes an ex look like the My Chemical Romance frontman Gerard Way.

“I’m a very sensory person and it’s definitely the way I think,” she said. “How dark the red of somebody’s sweater is, the album that sound-tracked a specific autumn, the name of somebody’s mother — all these things create a more immersive picture. I want my songs to feel like surround sound cinema.”

That ambition has grown more realized on “Collapsed in Sunbeams.” The album, which takes its title from a phrase in Zadie Smith’s book “On Beauty,” was written and recorded largely during the pandemic but the songs were inspired by rereading a diary Parks began keeping when she was 13. “This whole album is basically just my journal,” she said. “It’s a time capsule of adolescence.”

For most of the songs, she worked again with Buccellati, setting up shop at Airbnbs they rented in East London. The two found an easy working rhythm. Buccellati would go to sleep early and invariably, in the wee hours of the morning, Parks would text him from the next room with a playlist of music she was enthralled with at that moment. That playlist — which might include songs by Radiohead, Erykah Badu, Massive Attack, the Stone Roses — would inspire the music he’d craft the next morning.

She’d wake up after him, listen to what he’d made and start writing. After finishing a song, they’d watch a Studio Ghibli anime film like “Princess Kaguya” or “Howl’s Moving Castle” while eating dried fruit and drinking lemon tea, then get back to work. “There’s this heart-wrenching innocence about those films, but the lessons can be applied to adulthood a million times over,” Parks said. “I think some of the themes bled into my writing subconsciously.”

The album has a broader sonic palette than Parks’s economical early singles. The arrangements are fuller, the beats a little livelier. But it’s her sharp focus as a storyteller that stands out. On “Eugene,” she’s burning with jealousy as a best friend she’s developed a crush on has fallen for a guy. “You play him records I showed you/Read him Sylvia Plath/I thought that that was our thing,” she sings. Parks, who is bisexual, examines failed relationships with disarming generosity and a light touch. “Green Eyes,” which was inspired by the Pat Parker poem, “My Lover Is a Woman,” tells of a former paramour who “could not hold my hand in public,” but does so without rancor amid an airy, shuffling beat.

“Every word and line has a purpose, but it’s meant to be absorbed at your own pace,” said the singer and songwriter Clairo, who contributed guitar and backing vocals to “Green Eyes.” “She allows space for her audience to flow in and out of their relationship to her songs. It’s the kind of space where you’re in the car on your 200th listen to ‘Eugene’ and you actually hear what she’s been saying the whole time.”

The album’s first single, “Black Dog,” an empathetic portrait of a friend mired in a deep depression, was released in early May and has become something of a pandemic-era anthem. The tragic coda to the back story is that the friend who inspired the song died by suicide, but writing it, for Parks, “was part of the grieving process,” as has been the public reaction. “Getting messages from fans who were really lonely saying songs like ‘Black Dog’ had soothed them, made them feel safe and held, really warm my spirit.”

In a time that has been so devoid of tactile human connections, “Collapsed in Sunbeams” is an album that aches with them. Despite the veil of sadness that hangs over many of the songs, at its core, the album is a celebration of the people and support systems that reliably deliver us from daily battles with despair. It describes a universe where love, lust, booze, jealousy, sadness and, most of all, people to share all this stuff with, are the very marrow of life, and not just disappearing commodities glimpsed through a laptop screen. That these lifelines have been severed over the past year, or at least eroded, can at times bring an even more profound melancholy to this music.

Even though Parks’s music is, as Epworth put it, “forged in darkness,” it’s not consumed by it. “It’s searching for light,” said Parks. “I find it harder to write about joy because it’s simpler. There’s more complexity in sad things. But I’m a defiant optimist.” That glimmer of possibility, that belief that the light at the end of our collective dark tunnel could be something other than another onrushing train is, as much as anything else, what has made Parks’s music a part of many pandemic survival kits.

She admits, though, that without shows to play or chance encounters with fans, it can be hard for her to fully grasp her growing impact. “I see Instagram numbers increasing or whatever, but generally I’m just home playing Scrabble with my dad, journaling and reading books in my room,” she said, motioning toward her bedroom with a shrug. “I’ve been trying to put things in perspective, and ask, ‘Now that I’m here, how am I going to use my platform for good?’”