We could go for a laugh from these famous celebrities. Brad Pitt photobombed Margot Robbie at a Once Upon a Time in… Hollywood photo call. The Oscar-nominated duo star in Quentin Tarantino’s next film, and from the looks of it, they’ve been having a great time promoting the film.

Once Upon A Time…In Hollywood opens in theaters July 25, meaning the cast has been doing interviews, photoshoots and the like leading to its release. In the film, Robbie plays the late Sharon Tate, while Pitt takes on the role of Cliff Booth, Leonardo DiCaprio’s character Rick Dalton’s stunt double. Pitt and Robbie were joined by Tarantino and DiCaprio for a photo call this Thursday, where Pitt had a swell time photobombing his costar in dramatic fashion. 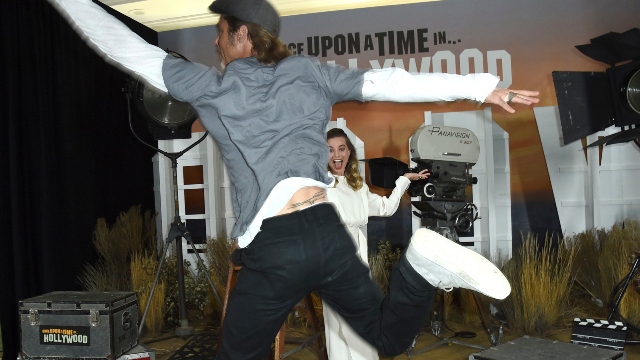 A snap of the photobomb shows Pitt jumping into the Oscar-nominated actress’s shot. But Robbie was totally unbothered by his antics. In fact, as Pitt photobombed her, Robbie threw up her hands and gave a smile, likely laughing at the Ad Astra star’s prank. From there, it was business as usual as the duo took their photos and continued to promote their exciting new project.

The film will be Tarantino’s ninth motion picture, and will encompass the raucousness of the late ’60s in Hollywood. Once Upon A Time…In Hollywood could also see the director depicting — or toying with — a tragic and frightening part of Hollywood’s history with the inclusion of Charles Manson. Manson and his ‘family’ were notoriously responsible for the brutal murder of actress Sharon Tate. So much of the film is wrapped up in ambiguity, fans will just have to see it to believe it. The film hits theaters in just a few weeks!