Times Insider explains who we are and what we do, and delivers behind-the-scenes insights into how our journalism comes together.

According to one projection, at least 13 million people in the United States will be forced to move by 2100 because of climate change. That migration in America is the focus of this weekend’s issue of The New York Times Magazine, the second part of a series on global human migration caused by rising sea levels, wildfires, hurricanes and more. Both articles feature images by Meridith Kohut, a photojournalist who documents humanitarian issues and who captured families and workers facing this reality. In an edited interview, she talked about the assignment.

Having first photographed this story around Latin America, how different was it photographing in the United States?

I’ve covered humanitarian crises internationally for over a decade, and this year is one of the first times I’ve ever worked covering my home country. You think America is more insulated from the devastation of climate change, but the past year has shown me that that’s just not true.

Did anything strike you as you photographed Latin America, and then the States, where many of those migrants are heading?

When I was in Guatemala, a lot of the farmers in Alta Verapaz were growing maize, and they were showing me their harvests. The stalk would grow, the corncob would grow, but there would be hardly any kernels, so they couldn’t really eat it or sell it. When I went to Ramona Farms, an organic farm in the Gila River Indian Community in Arizona, they went out to harvest organic blue corn. They opened up the corn husks and it looked exactly the same. It’s heartbreaking to see everything the migrants in Latin America are sacrificing and risking to make the trip north. They’re putting all of their hope in thinking things will be better here, but it’s pretty bleak here too.

Looking through your photos, there’s a kind of sweetness to some of them. What did you want your approach to be?

The story is data-driven, and Abrahm Lustgarten had already finished writing it before I started working on the photographs. Statistics and charts and scientific models can sometimes be hard for people to relate to. My job was to humanize the data — to go out and tell the stories of the people living with what the data shows. My approach was to try to document the emotional toll it takes on people who lose their homes, the seniors who spend their days just trying to survive the heat, and hopefully do it in a way that touches our readers’ hearts and inspire them to take action to help reduce carbon emissions and mitigate climate change.

You wrapped up this story fairly recently, is that correct?

Yes. The original plan was to photograph this part of the series in the spring, and document communities that are still rebuilding, years after being destroyed by fires or hurricanes, but Covid-19 caused the story to get put on hold, and I spent the spring documenting the pandemic instead. It was August before I could head out to start working on this story, and August ended up breaking extreme-weather records across the board. I witnessed the most destructive wildfire season ever in California, Arizona’s record-setting heat wave and Hurricane Laura in Louisiana. 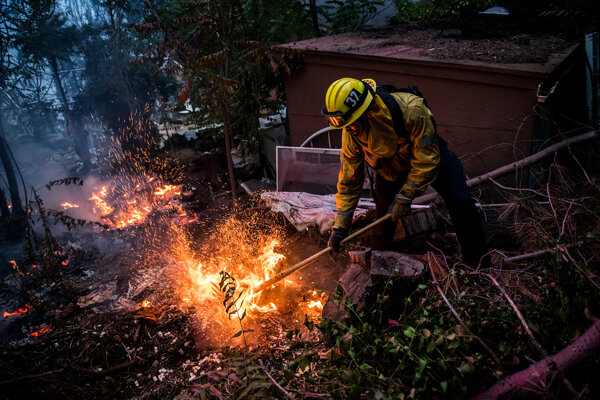 With weather being such a factor in making your job easier or harder, what kinds of challenges were you encountering?

Oh yeah, my cameras got utterly and completely filthy. We were right up on the fireline at multiple fires, and it was raining ash. All over my cameras, all over me. It was very hot, and the thick smoke made it hard to breathe at times, and burned my eyes and throat. The fires can move quickly when the wind picks up, so you’re constantly having to be situationally aware and plan escape routes. I drove into Hurricane Laura at dawn, with a search-and-rescue caravan, a few hours after it made landfall. It was a difficult drive — pouring rain made it hard to see the road, and I had to dodge debris, as strong gusts of wind pushed my truck around on the highway. Power lines were down all over, blocking roads. There was no gasoline, electricity or running water.

The hotel The New York Times had booked for me was destroyed, so I slept in my truck for days. My editor felt really bad about it, but after over a decade living and working in Venezuela I’m pretty used to challenging field conditions. “Oh my gosh, you had to sleep in your truck!” she said. “Are you kidding?” I responded, “I was in a Walmart parking lot! It was so nice!”

Was there anything else about your work that was new to you?

I’ve covered several natural disasters around the world before, but this was my first time ever photographing a wildfire. The wide landscape fire shots, like the cover photo, were made at night, using a tripod and long camera exposure. I usually shoot everything hand-held, using natural light, so I was definitely out of my comfort zone photographing the fires. I took wildland firefighting classes online to learn about how fires move, and I had to wear all of the same P.P.E. that the firefighters use. The Times hired Stuart Palley and Jeff Frost, two experienced wildland fire photographers, as consultants who were fundamental to establishing the security protocol and keeping everyone safe.

When you started out as a photojournalist, did you see yourself doing an assignment like this?

This is the type of work that I want to be doing. There’s so much misinformation and misunderstanding about climate change, and it’s one of, if not the most important topic that people all around the world should be learning about right now. I want to be on the frontline helping people understand it. It’s dangerous work, it’s exhausting work. There were multiple days that were 24 hours of shooting without stopping. A lot of sleepless nights. But it’s worth it.