Fanny Singer takes some liberties with her version of the classic dish, going so far as to include lettuce.

“Hi. I’m Fanny Singer. And today, I’m cooking an herby grilled tuna salad. It’s called a deconstructed salad nicoise. The majority of the ingredients for the salad are from the farmer’s market. And I always like to go to the farmer’s market and see what they have and then sort of adapt accordingly. This is kind of a adaptation of a nicoise salad with freshly grilled tuna. This version keeps it super, super light and fresh. For this recipe, you’ll need sushi grade ahi tuna steaks, red bell peppers or smaller heirloom peppers, little gem lettuces, cherry tomatoes, Persian cucumbers, and whole or pitted olives. First, you want to start your grill. And then while your coals are getting ready, that’s when you’ll make the vinaigrette, the dressing, and then also the marinade for the tuna. So to make the vinaigrette, I like to use what is called a Suribachi style mortar and pestle. It has a serrated sort of rigid interior which helps you really pulverize the ingredients. Two cloves of garlic go in there. Just a big pinch of salt. And then you just pound. Pound it into a paste. Next, you’ll take about a cup of basil leaves. Little at a time, you add back into your mortar and just pound. Al right. So this is what it should look like. And now add the mustard. Add the acid and the olive oil, and whisk it all together to emulsify. And then lastly, the zest of a lemon. Dump it in. Next, we’ll make the marinade for the tuna. It’s a tablespoon of Dijon mustard, couple of tablespoons of olive oil, couple pinch of salt. I love using Black Urfa Chili. It’s got a delicious flavor, kind of smoky and deep. And then you’ll use the juice of half a lemon. And then that will just sit in this little marinade until we’re ready to grill. When your coals are hot is when you put your peppers on. Close to the fire because you want to get those completely blackened. When the peppers have this kind of black skin on both sides, that’s when you can take them off the grill. So next up is the fish. That’s the sound we like to hear. I’m not a huge fan of like super, super raw seared tuna, which was oh so popular in my childhood in the 90s. There we go. Next, we’re going to be peeling the peppers. I like to cut them into sort of ribbons. To prepare the cucumbers, I like to just peel them partially. That will give it kind of zebra stripes. Cut usually lengthwise like this. I often cut things on the bias, which is how I describe that diagonal angle. And then the last vegetable that we’ll prepare are the cherry tomatoes. One thing I learned when I was working at my mom’s restaurant, Chez Panisse, when I was in college was to always cut through the stem scars. It makes the presentation much neater. To assemble this salad, we will throw in the cucumbers. So then I will lay this down on my platter first. Next, I’m just going to dress the tomatoes with a little bit more lemon juice, tiny bit of olive oil, and a little bit of salt as well. These will just get beautifully laid over top. The tuna is next, which is when we reveal whether I have overcooked the fish or not. Because it already kind of is separating along these lines, I’m just going to follow that. I’ll spoon some dressing just over the fish. A little bit of black pepper. And then we’ll add the peppers, which are nice sort of strewn over the top kind of like confetti. The finishing touch will be to just scatter some of your olives over top. Et voila, we have the herby grilled tuna salad.” [MUSIC PLAYING] 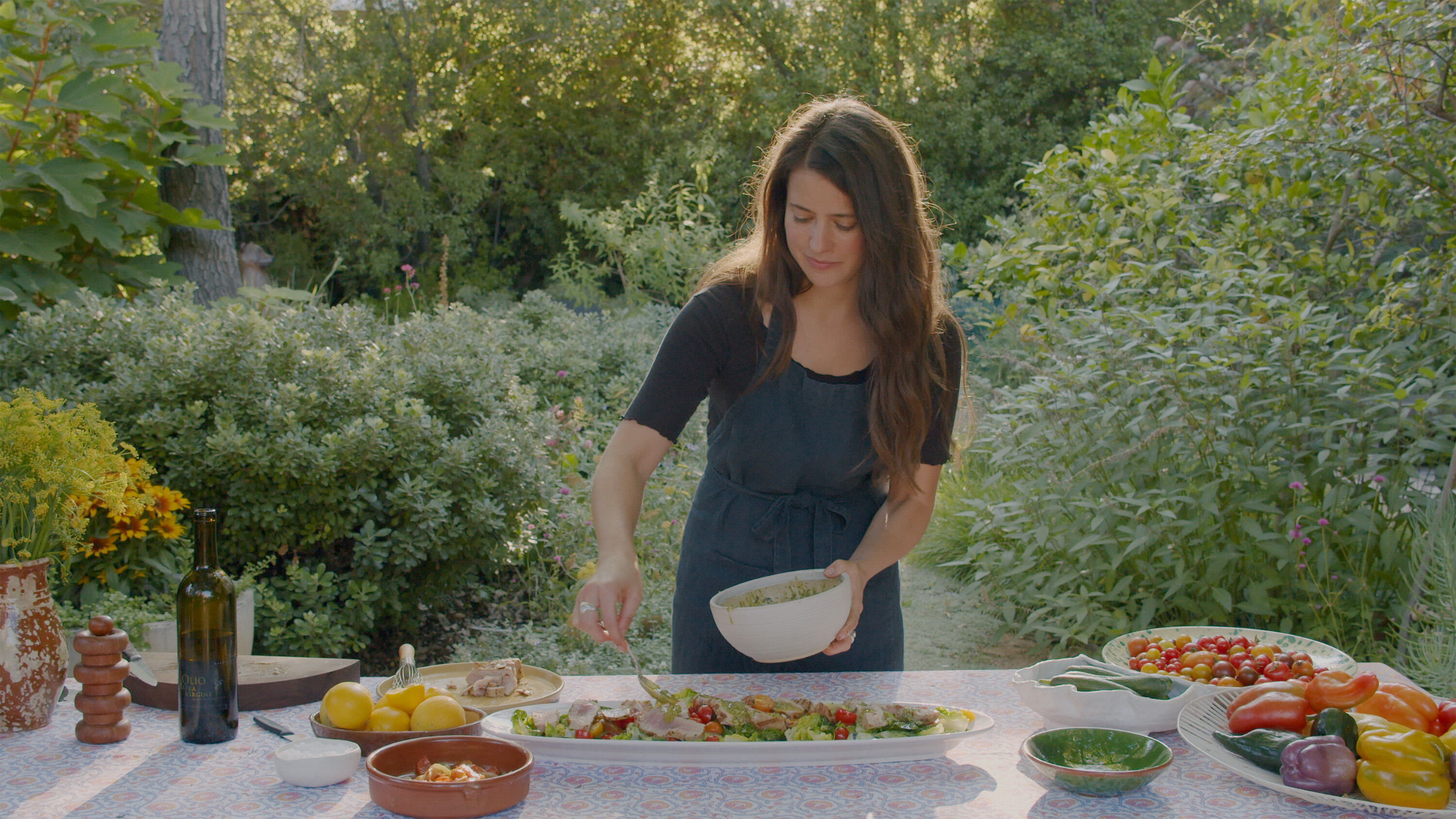 “Lettuce is not typically found in a salade niçoise — it’s sacrilege,” says the writer and art critic Fanny Singer. “But I’ll sneak lettuce into every meal.” It’s a fitting act of rebellion for the daughter of the chef and restaurateur Alice Waters, the owner of Berkeley’s legendary temple to local produce, Chez Panisse. Meanwhile, Singer’s father, Stephen Singer, owns a vineyard in Sebastopol, Calif.

Unsurprisingly, then, Singer’s upbringing revolved around the kitchen, whether she was at home, at the restaurant or in the South of France, where she often spent summer vacation, visiting family friends who schooled her in the arts of antiquing, gardening and inventing rustic dishes out of whatever ingredients were on hand. As an adult, though, she sidestepped the food world, getting her Ph.D. in art history at Cambridge, and, in 2016, co-launching Permanent Collection, her and Mariah Nielson’s line of impeccable design objects, from wheel-thrown ceramic candleholders to sculptural gold jewelry to a half-circle cutting board made from salvaged walnut wood, made in collaboration with a coterie of handpicked artisans. 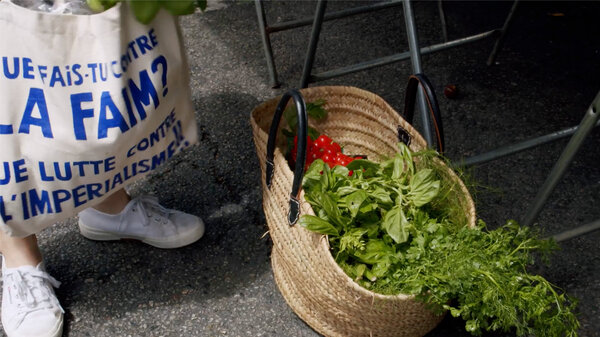 Still, and as some of the brand’s offerings suggest, food continues to inform Singer’s sense of self. In March of last year, she released a culinary memoir, “Always Home,” which is filled with stories that reflect Waters’s ideas about living simply and elegantly. Its title “turned out to be hilariously and tragically prophetic,” says Singer, who moved back to the Bay Area in 2017 and, at the start of the pandemic, spent 10 months living with her mother in her childhood home. “And yet at the same time it emphasized the essential idea,” she says, “which is that even if you’re far away, there’s a way to arrange your life in a way that makes you feel as though you’re close to the people you love.” This might include creating a compost pile in a tiny apartment kitchen, “a classic Alice Waters move,” says Singer, that she attempted during her college years in chilly New Haven, Conn., which led to her “guilt-freezing” her food scraps for months until she could find a suitable place to dispose of them.

And, though Singer identifies as a casual cook and not a chef, the book also includes a number of recipes she’s developed over the years, including ones for green goddess lobster rolls and grilled squid with yuzu salt. Indeed, Singer now considers cooking to be “completely continuous” with her interests in art, design, culture and criticism. Having recently relocated to Los Angeles (where Waters is opening a restaurant in the Hammer Museum this fall with chef David Tanis), she has been inspired by the city’s art scene and, of course, its lush farmers’ markets.

It’s a Thursday afternoon when Singer arrives at the verdant backyard of her godmother, Sue Murphy, whose Silver Lake home she often entertains in, with an overflowing haul from the Santa Monica Farmers Market. (“I have a real ‘more is better’ mentality,” she says.) The salad she’s making today, a version of which figures in her book, is based on a deconstructed niçoise that, in addition to including the aforementioned blasphemous lettuce, features tuna that’s grilled instead of canned, and omits green beans, eggs and potatoes. “It’s a lighter, fresher take that’s adaptable to whatever’s in the market,” she says.

The only cooked elements are the tuna steak and bell peppers, both of which get grilled over hot coals. But before doing anything else, Singer makes an assertively seasoned basil vinaigrette. “I like to use a lot of garlic, always a little more than what my mom would suggest,” she says as she pulverizes basil, garlic and salt using a Permanent Collection mortar and pestle that, with its ridged interior, is modeled after a Japanese suribachi, or grinding bowl. “A mortar and pestle is the tool that, after a good knife, I use the most in the kitchen,” Singer says, as she whisks in a bit of Dijon mustard, lemon zest, white wine vinegar and extra-virgin olive oil.

While the peppers char on the grill, Singer marinates the fish (procured from the local fishmongers Mayday Seafood), which is then cooked medium, unlike the barely seared tuna steaks that were “oh-so popular in my childhood in the ’90s,” Singer says with a laugh. From there, the salad is mainly a matter of assembly.

The finishing touch? Niçoise olives, preferably pit in — “a charming land mine for guests,” says Singer, and the “only definitive concession to what a salade niçoise really is” — scattered across the top. She likes to plate the dish on a vintage platter shaped like a fish, but the vessel is less important than the spirit with which it’s presented: “I always serve salads family-style,” Singer says. “It should feel casual and communal.”

¼ cup whole or pitted olives (can be a mix of Kalamata, niçoise, picholine, etc.)

1. Start by building a wood or charcoal fire, or lighting a barbecue, as you’ll want to be grilling the fish over very hot coals, not flames.

2. A good salad depends on the vinaigrette, and when you’re incorporating grilled elements, you’ll want an herbaceous, garlicky dressing to stand up to the flavors of the grill. To make the vinaigrette, first pound two garlic cloves and a generous pinch of salt in a mortar until pureed. Chiffonade the basil leaves and add them to the mortar, along with another modest pinch of salt, and pound, with some effort, until the leaves break down to form a pulp. Add 1 tablespoon of Dijon mustard, the zest of 1 lemon, white wine or rice vinegar, and about one ½ cup of olive oil. Whisk together and taste. It should taste very bright but not glaringly acidic. Adjust if necessary.

3. Make a marinade for the tuna with 3 tablespoons of olive oil, 1 tablespoon of Dijon mustard, a big pinch of salt, ½ teaspoon Black Urfa chili, ½ teaspoon of freshly ground black pepper and the juice of half a lemon. Coat the tuna and allow it to sit until the fire is ready for grilling, or up to 30 minutes.

4. Wash and dry the Little Gems, pulling apart the leaves and discarding any that are wilted, tough or bruised.

5. When your fire (or barbecue) is ready, put the peppers on the grill, turning them to blacken the skin completely and soften the flesh entirely, for 10-15 minutes. Remove from heat and place the peppers in a small bowl, covered, allowing them to steam, which will make slipping off the skin easier. When cool enough to handle, remove the skin and seeds from the peppers using a paring knife and cut them into ½-inch slices on the bias. Season with a pinch of salt and dress lightly with 1-2 tablespoons of olive oil.

6. Cut off the top and bottom ends of the cucumbers and then slice them, first lengthwise and then in slices, on the bias. Halve the tomatoes, being careful to slice neatly through the stem scar.

7. Place the tuna on the grill for 5-7 minutes, or until nicely seared on the outside and still a bit pink in the middle, flipping once. Set aside on a cutting board to rest.

8. Whisk the dressing vigorously to emulsify it. Put the lettuce and cucumbers in a large bowl and toss with a splash of lemon juice and half the dressing. Arrange the dressed lettuce leaves on a shallow platter (which will help show off the beautiful ingredients). Then, in a small bowl, toss the tomatoes in a splash of lemon juice and a pinch of salt and then scatter over the lettuce. Slice the tuna and arrange on top of the salad. Scatter the ribbons of pepper over the top, then drizzle the vinaigrette over the tuna and peppers. Scatter the olives on last and serve it up!