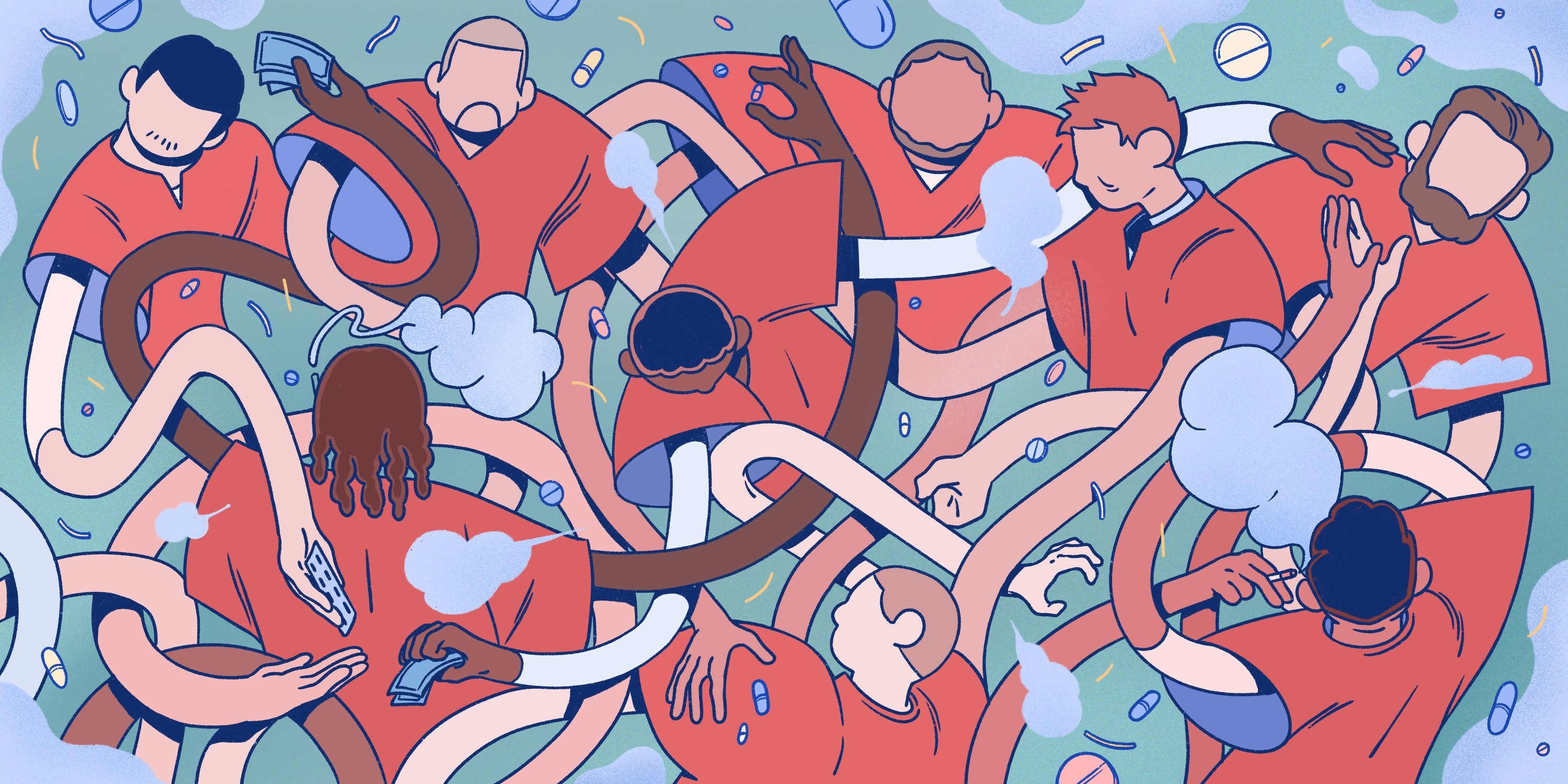 This article was published in collaboration with The Marshall Project, a nonprofit newsroom covering the US criminal justice system. Sign up for their weekly Life Inside newsletter.

I was on the phone with my wife as usual on a Saturday evening a few months ago when my prison’s P.A. system crackled and a stressed-out voice announced: “All rec yards are closed; offenders will report back to their dorms immediately.”

Something big was clearly afoot, and everyone rushed to the front windows to get a better view. People spoke in hushed voices, not the usual clowning, speculating about what might have happened.

It turns out that eight people had overdosed at once, most likely on “spice.” They passed out on the recreation yard, laid out side-by-side on the concrete while nurses and guards ran around with stretchers and wheelchairs trying to keep control and render medical assistance, in that order.

As far as I know, one of them is now dead, while seven have since recovered and were transferred to other compounds. I think the one who died only had about 30 days left on his sentence.

You can bet on two things following from that sort of trainwreck. One, the addicts in here will continue snorting and smoking anything they can find. And two, the rest of us will pay for the mess they’re making.

I guess I was a little naive when I was first locked up, thinking it must be hard to obtain drugs and get high while incarcerated. But to my shock, it was as common or more so than on the outside. (I’m probably in the minority in here because I don’t use, it’s that pervasive.) Spice, weed, Suboxone, Neurontin, Seroquel, orange peels — people try to get high on whatever they can find, everywhere I’ve been locked up, and no matter what security measures are in place to prevent it.

When I was first in the jail in Washington, D.C., inmates openly smoked “K2” while gathered in cell doorways. You smelled that synthetic stuff more often than weed or cigarettes, though those were common too. Some bothered to try and conceal it by blowing the smoke down the toilet, but most didn’t.

I would see correctional officers walk by and pretend not to notice; they aren’t paid enough to care. People knew which C.O.’s would write them up, and that was an awfully short list.

And while I went to high school with casual weed smokers, and worked at various jobs with weekend coke snorters, I was entirely unprepared for what I’ve seen in state prison. These are mostly desperate addicts with little else to organize their days around besides the next fix. Getting high is their whole bid. The money they hustle up or that their family sends them, every hard-earned dime of it, is spent on drugs. All they get is small amounts of low-quality stuff, but they’ll take it. Because even at the ridiculously high prices this stuff sells for behind bars, that crummy, overpriced little piece will keep the shakes away for another day.

To give you some idea, a sixteenth of a strip of Suboxone (a “piece” in our parlance) can sell for 15 dollars here, when supply is scarce. Go Google what a Suboxone strip looks like, imagine that cut in fourths, and then fourths again. It’s miniscule. And then remember that those 15 dollars could have bought that addict 50 ramen soups from the commissary.

Even at the normal price of five dollars for a piece, it’s a terrible waste. Five dollars is a lot of money in lockup.

They hustle to get it — they steal from the kitchen and sell the food, they gamble on sports or cards, they iron shirts or wash dishes, whatever it takes. Sometimes they even use sex as currency for the price of a high, or are coerced into it to cover their drug debt.

Or their families, or girlfriends, or buddies back home, are sending money, thinking it’s going toward keeping them well-fed and well-clothed. It’s likely money that was hard to come by, because most people in here are decidedly not wealthy. Rich drug abusers go to treatment, not prison.

Plenty of inmates have prison jobs, but those pay on average about a couple bucks a day — and you can’t get high too often on just that.

Most drugs only come in here in one of three ways: mail, visits, and corrupt C.O.’s.

Prison officials can take steps to block the first two kinds of smuggling, of course. Blocking the mail route is easy: Prisons are moving to give inmates photocopies of letters instead of the originals. And at visitation, they can strip-search us and make us wear embarrassing jumpsuits that zip up the back (the officers have to do that part). They also harass our visitors about what they’re wearing and their feminine hygiene products, to make sure that nothing gets in.

And then when people overdose, they lock us all down, and shake down our lockers, and take away our recreation time. They do random drug tests, and run drug-sniffing dogs through the dorms now and then.

But it doesn’t change anything. Until they pay correctional officers a decent wage, or strip-search them every day, there’ll always be a few guards who will take the risk of bringing in small quantities of drugs to sell, given the enormous paydays at stake. Again: Have you ever seen a Suboxone strip? It’s so small and nondescript, it’s like it was made to be smuggled.

The news media has reported statistics that highlight the scale of the problem: Virginia has just under 30,000 inmates spread across more than 40 facilities; they received almost two million pieces of mail in 2018 and 225,000 visits. That year, there were 562 seizures of drugs inside those penitentiaries; 57 emergency-transport runs to hospitals carrying overdose patients; six interceptions of substances coming in through the mail; four prison employees prosecuted and 13 who resigned or were fired for smuggling. The numbers say that the state is barely scratching the surface of the problem.

Meanwhile, treatment programs just don’t work in here. Prison is dismal and there isn’t much that’s positive to focus on, to keep an addict’s mind more productively occupied. The incarcerated person who is secure and self-aware enough to admit he has a problem and needs help is a rare breed.

“It’s wide open over there,” you’ll hear addicts say with glee in their voice, when they’re called to pack their belongings because they’re being shipped off to the two-year residential treatment facility that Virginia runs.

The big picture — that we incarcerate people for their addictions and then don’t give them adequate treatment — is a silent national disgrace. But it’s the little picture that I have to live with every day, that angers me and breaks my heart. It’s the individual human beings who have been failed by the system, and the often-already-poor families who are devastated even further by loved ones caught up in the cruelties of a vast enterprise.

One of my last bunkies was pitiful: a lying, scheming, thieving addict who ended up having two fistfights within hours over his drug debts and the stealing that he was doing to support his habit. He was about the worst I ever saw, snorting stuff about six times a day. “I have sinus issues,” he’d often claim with a straight face, as he fit the toothpaste cap to his nostril and threw back his head once again.

One day I came back from work to find him frantically rummaging through his mostly empty locker, and crawling around on the floor.

“What’s up?” I asked, somewhat reluctant to involve myself.

“Someone stole a piece out of my locker,” he said, panicky.

This was certainly possible, since the addicts always seemed to be taking anything they could get their hands on, especially from each other. But instead I told him, “You probably just lost it,” hoping for less drama. I also pointlessly reminded him that a piece looks a lot like a paint chip, and those are everywhere.

Around that time I’d started composing a country song titled, “My Bunkie Is a Junkie,” but I found that not much rhymes with Suboxone. Now he’s in another housing unit, pulling the same stunts. Still, I can’t hate him for any of that, or for stealing some food from me to support his habit; it’s just too depressing.

In my time in the jails and prisons in D.C. and Virginia, I’ve been astonished by just how many people are locked up for drug crimes or, it’s important to note, drug-related ones. Black, white, Hispanic, it doesn’t matter: In state prisons and local jails, 15 percent and 25 percent of inmates are there for drug offenses, respectively. In federal prison, it’s even worse: More than 45 percent of inmates are there on drug-related charges.

That’s a mind-boggling number of human beings locked up because of their addictions, either directly or indirectly. Our response to this problem is to put them in prison, where they’ll get little to no help and have all the time in the world to sit around scheming about getting high.

I don’t have some smart solution for all of this. Just like on the street, little works for people who don’t want to quit using. But I know that most of these addicts don’t belong in here. Trying to incarcerate our way out of the problem is not helping them, and it’s not making society any safer either.

Because these people will all be out on the street again in a few years — and all they learned in prison was how to cheat and steal and hustle more creatively to get high.

Daniel Rosen, 49, currently resides at the Greensville Correctional Center in southern Virginia, where he is serving a five-year sentence for computer solicitation of a minor. He spent 15 years working for the departments of State and Defense on national security issues.

More from Life Inside