WILLIAMSTOWN, Mass. — Two ghost stories are running side by side here at the Williamstown Theater Festival, but only one has “Ghosts” as its title.

That’s the headliner, on the festival’s main stage: Ibsen’s classic about a family and a society possessed (and literally sickened) by inbred amorality. To the play’s already overflowing grab bag of symbols and hot topics circa 1882 — syphilis, incest, arson, euthanasia — the director Carey Perloff adds gorgeous stage pictures, eerie live music and a glowy Uma Thurman giving a creditable performance in a famously difficult role.

Just across the lobby, on the festival’s Nikos Stage, is the other ghost story, as stylistically distant from Ibsen as a play could reasonably get. In Adam Bock’s “Before the Meeting,” the walking dead are recovering modern-day alcoholics and drug addicts, setting up a church basement for a series of 12-step meetings. They don’t discuss abstract philosophy; their chief concerns appear to be the maintenance of the coffee urn and the arrangement of the chairs.

But over the course of eight days, as the play digs deeper, its naturalistic trappings drop away. Eventually Mr. Bock takes us dangerously close to the glowing core of Ibsen territory, giving the Off Broadway treasure Deirdre O’Connell a stupendous 25-minute monologue that rips open the story with heartbreaking self-reproach. Phantoms, she demonstrates, do not come unbidden into our lives; we invite them, over and over.

From the play’s first third — the whole thing is only 75 minutes long — I didn’t expect that Mr. Bock would get us there. As in “A Life,” seen at Playwrights Horizons in 2016, he uses structure and genre in part as misdirection, leaving us unprepared for the changes he’s planning. Partway through “A Life,” it can now be told, its main character dies, an event we almost aren’t sure is happening until its emotional force hits us belatedly like an anvil from the sky.

Trip Cullman’s clever production, a world premiere, makes the most of a similar feint in “Before the Meeting,” offering in its opening segments a high-octane naturalism of the most expert — and creepingly tedious — sort. Bossy Gail (Ms. O’Connell) lords over the daily preparations. Whiny Ron (Arnie Burton) clashes with her over the contrasting values of consistency and change. Overcompensating Nicole (Midori Francis) tells worse and worse jokes about addiction. All three try to indoctrinate newcomer Tim (Kyle Beltran) into their cheerful, mundane habits, as if they were the sum of the work of recovery.

Watching these four actors go at the material is like watching a team of obsessive-compulsives detail a car. (Mr. Cullman and Mr. Bock are frequent collaborators.) But however beautifully performed, the story at first seems pat. Each character has a little drama, told in installments, of struggle on the outside: a pregnancy, a health scare, a hopeful message from an estranged relative. These stories balance heart and humor and ominousness according to a much-tested recipe — an effect enhanced by the cute interstitial vignettes Mr. Cullman has inserted to mark the passages of time.

And then, just when I thought this couldn’t go on, it didn’t. Ms. O’Connell’s aria resets the entire play on a different plane, and one of the reasons you never want it to end (even as you can’t believe she’s still pulling it off) is that you know Mr. Bock will not stop there. How could he leave a play about addiction on a high?

Sure enough, in the final third, which I won’t spoil, everything shifts again, this time more subtly, undoing and complicating our understanding of what it means to be haunted. 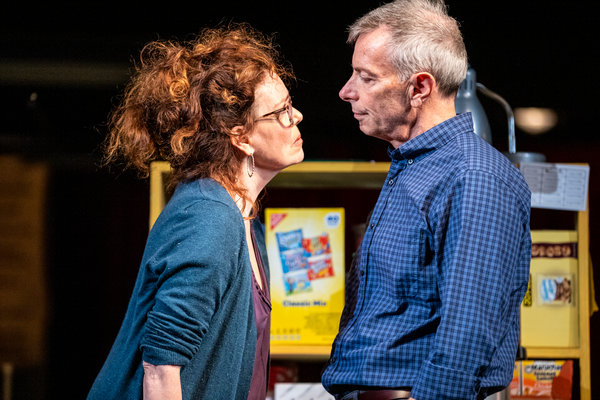 If the characters in “Before the Meeting” are furiously trying to outrun their tragedies, Ibsen’s more unsparing vision does not give his characters that option. “Ghosts” introduces us to the Alving family and its hangers-on already in a state of near disaster. The question is merely whether they will submit to it honestly or make a worse mess by failing to.

At the center is Helene Alving (Ms. Thurman), a youngish widow whose only child — an artist named, like his father, Oswald (Tom Pecinka) — has just returned to Norway after renouncing the bohemian life in Paris. Though Oswald (like the rest of his hometown) believes that his father was a great man, Helene knows better; he was, in fact, a syphilitic debauchee whose sprees and extramarital offspring had to be muffled with poultices of lies and cash.

The tightest and swiftest of Ibsen’s 12 canonical prose plays, “Ghosts,” seen here in a clean new translation by Paul Walsh, has only five characters. A sanctimonious pastor (Bernard White), an ambitious maid (Catherine Combs) and the maid’s skeevy father (Thom Sesma) provide all the additional rope needed to fashion a pile of nooses. And though Oswald faces the most excruciating fate — his father’s syphilis has returned to possess him, like one of the title revenants — the ghosts of inherited morality are what Ibsen is most interested in exorcising.

As such, he lavishes his worst ironies on the pastor, a figure so compromised by hypocrisy that he winds up agreeing to help finance a whorehouse with parish funds. It is Helene — the first to see through society’s depraved priorities — who passes for a heroine here, but only at the expense of blaming herself (with Ibsen’s approval) instead of her husband. If Nora hadn’t escaped from “A Doll’s House,” Helene might have been the result.

Ms. Thurman, who made the best of a bad deal in “The Parisian Woman,” her 2017 Broadway debut, brings similar qualities of intelligence, poise and integrity to this “Ghosts.” That she feels passionately enough about the play to justify such a lavish production is all to the good.

But the lavishness of Ms. Perloff’s staging is actually part of the problem. With its glass-box solarium and steep grass roof, the Alving manse looks like something from Architectural Digest. The period clothing is so gorgeous it makes everyone look burnished. (Sets and costumes are both by Dane Laffrey.) When anything ghostly happens, we get tickly music (both recorded and live, by David Coulter) for vibraphone, saw, wine glasses and such.

Everything is aestheticized. Even in the throes of syphilis, Oswald seems more Barrymore-bitten here than what Ibsen memorably describes with the French word “vermoulu”: worm-eaten.

And he wasn’t just talking about Oswald. Ibsen’s ghosts were not just spirochetes but also ideas: the false ones that ruin lives and generations. Of the two plays closing the Williamstown season, it’s the knockout “Before the Meeting” that actually drives home the point. “Liberty is the greatest human masterpiece,” Gail says during her thrilling speech. “And yet we never seem to use this freedom.”

Jesse Green is the co-chief theater critic. Before joining The Times in 2017, he was the theater critic for New York magazine and a contributing editor. He is the author of a novel, “O Beautiful,” and a memoir, “The Velveteen Father.” @JesseKGreen • Facebook