Princess Eugenie announced the arrival of her first child with Jack Brooksbank by sharing a glimpse of their newborn on Instagram Tuesday.

She welcomed her son, whose name has not yet been announced, at 8:55 a.m. at The Portland Hospital in London, according to a statement from Buckingham Palace.

Eugenie left the details out of her own announcement and instead posted a black and white photo of the little one’s hands intertwined with his parents’ fingers. She added three heart emojis and exclamations to her caption:

Eugenie’s decision to announce her son’s arrival on Instagram ― in tandem with the palace’s statement ― is reminiscent of how Prince Harry and Meghan Markle introduced their son Archie in May 2019.

The Duke and Duchess of Sussex forwent the tradition of delivering their child at St Mary’s Hospital in London, where royals like Princess Anne, Princess Diana and Kate Middleton posed with their newborns on the Lindo Wing steps for members of the media gathered outside.

The Sussexes instead introduced their son two days later at St George’s Hall at Windsor Castle in Berkshire. 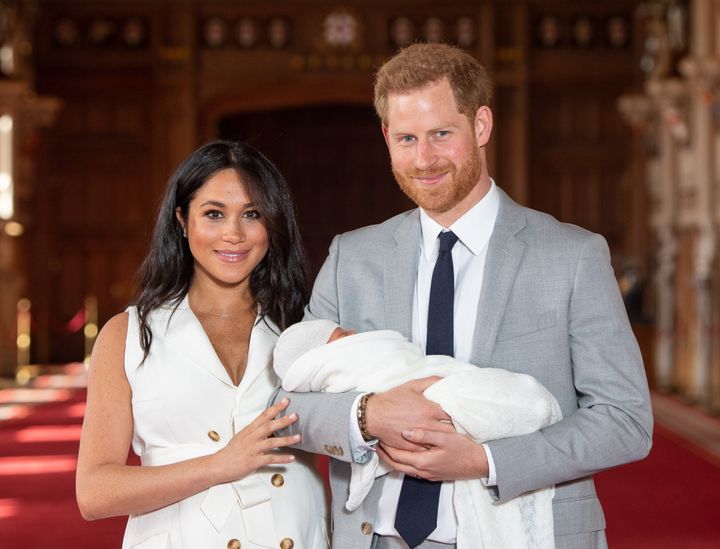 Eugenie’s first-ever photo of her son is also similar to the Duke and Duchess of Sussex’s pictures of Archie just after his birth, which appeared on their now-defunct Sussex Royal Instagram account.

Instead of showing Archie’s full face, Harry and Meghan shared a photo of Meghan holding the newborn’s feet for her very first Mother’s Day back in 2019.

A post shared by The Duke and Duchess of Sussex (@sussexroyal)

A few weeks later, the couple posted a sepia-filtered photo of Archie (with his eyes peeking out!) holding his father’s hand on the Duke of Sussex’s first Father’s Day.

A post shared by The Duke and Duchess of Sussex (@sussexroyal)

So far, Eugenie and Brooksbank have escaped the criticism the Duke and Duchess of Sussex faced at the time for keeping their son’s face out of public view until his christening.

It’s possible the royal cousins chatted out parenting tips and swapped royal birth scenarios before Eugenie welcomed her son. Eugenie and Harry, whose fathers are siblings, are said to be quite close, according to “Finding Freedom” authors Omid Scobie and Carolyn Durand.

The authors wrote about the cousins’ relationship in their book about the Sussexes, saying that “Eugenie has always been more than just a cousin” to the prince and that the two are “the closest of friends.”

Subscribe to HuffPost’s Watching the Royals newsletter for all things Windsor (and beyond).