Don’t look for God within the cloisters of “In the Green,” Grace McLean’s oddball musical portrait of the sainted medieval nun, theologist and composer Hildegard von Bingen. Though Hildegard (1098-1179) was celebrated for having a direct line to the almighty, via holy visions, the Judeo-Christian deity is invoked but briefly in this LCT3 production, and then only as an interjection (as in “oh, God, I’m suffocating”).

As for Jesus, he’s not even name-checked, except in Latin at the very beginning. On the other hand, it wouldn’t be surprising, however anachronistic, to hear the psychoanalytic theorist Carl Jung mentioned with holy reverence.

Ms. McLean, you see, has trained her gaze not toward the heavens but inward, into the darkest realms of the psyche, where the shadow self is hidden. Digging, literal and otherwise, is the central activity in “In the Green,” which opened on Thursday night at the Claire Tow Theater at Lincoln Center. Its implicit message: You can’t see the light until you’ve figured out what’s underground.

This strained presentation of Hildegard as a singing sufferer of post-traumatic stress disorder is one of several wildly inventive musicals to have arrived in New York recently. The past couple of months have seen the Off Broadway openings of Dave Malloy’s “Octet,” an a cappella songfest about internet addiction, and Michael R. Jackson’s “A Strange Loop,” which takes place inside the head of a queer, black man writing a musical about a queer, black man.

But for audacity and opacity it’s hard to top “In the Green,” which is directed by the gifted Lee Sunday Evans and features Ms. McLean as Hildegard’s mentor, the Benedictine abbess and anchoress, Jutta von Sponheim. Those unfamiliar with Hildegard’s astonishing C.V. — she is regarded as the creator of both the first morality play and a founder of scientific natural history — may still leave “In the Green” wondering why she’s such a big deal.

The uninitiated should definitely not expect a solid introduction to the extraordinary musical achievements for which Hildegard is best known today, which include the liturgical song cycle “Symphonia armoniae celestium revelationum.” Ms. McLean and her highly sophisticated musical collaborators experiment quite ingeniously with the Hildegardian elements of style, reworking them into fragmented, jazzlike fugues.

Still, unless you’re already acquainted with the masterworks of Hildegard, you’re unlikely to appreciate Ms. McLean’s splintering riffs on the original. The entire production is steeped in a mixture of archness and earnestness that prohibits emotional engagement and easy listening.

The production begins with a musical quotation, sung in Latin, from Hildegard’s “O virga ac diadema.” Enter the child Hildegard (a faceless puppet, designed by Amanda Villalobos), who is being consigned by her family to a life as an oblate in a monastic cell with Jutta.

“Inside the cell, she’ll be technically dead, but super comfortable,” Hildegard’s mother is told by the monk in charge. Such breezy contemporary speech would appear to be the lingua franca here.

The door of the cylindrical centerpiece of Kristen Robinson’s set — which brings to mind an Art Deco bank vault — opens to reveal a sparsely furnished room with a single, high window and a floor of dirt. Jutta instructs Hildegard to dig, and keep digging, which the obliging child does, as the years pass, while Jutta sings of self-denial as the road to freedom.

Hildegard is at this point a divided self. She is thus portrayed by not one but three young actresses — Rachael Duddy, Ashley Pérez Flanagan and Hannah Whitney — who operate puppets representing Hildegard’s mouth, eyes and hands. It is typical of the show’s bizarrely jaunty tone that Jutta acknowledges this state of being by saying, in rhyme, “I can see that you’re broken apart/But in here, you can have a brand-new start.”

When Hildegard has her first period, Jutta explains the curse of original sin: “Eve had a hunger she couldn’t contain./ She was punished for wanting to gain./So her want became her stain.” The best way of dealing with Eve’s burden, it would seem, is to stop eating and pretty much deny the life of the senses altogether.

But in digging around that floor, Hildegard is inspired to uncover a repressed episode from her early childhood, while also summoning her mentor’s Shadow (Mia Pak), an embodiment of a painful past, which Jutta had hoped to keep buried forever. But Hildegard is determined to combine her fractured identity into a whole, and “integration” (a song title here) becomes her watchword. 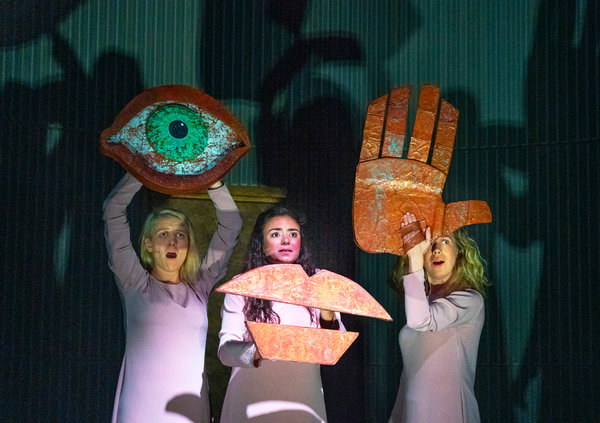 Ms. McLean — a piquant performer in the musicals “Natasha, Pierre & the Great Comet of 1812” and “Alice by Heart” — would appear to be trying to demythologize Hildegard from a sociological, feminist perspective. The script implicitly correlates religious asceticism with the abuse and commodification of women in the Dark Ages.

It’s an intriguing approach, but you have to squint really hard to figure out what Ms. McLean is doing. And the abrupt postscript of a conclusion, which refers to the adult Hildegard’s rejection of a religious sect known as the Cathari, will make no sense whatsoever to most theatergoers.

Give credit, though, to the bold musical experimentation going on here, generated by an ace team that includes Kris Kukul (music supervisor and, with Ms. McLean, orchestra), Ada Westfall (music director) and Nicholas Pope (sound). The score is designed to disorient, with shards of notes that seem to emanate from all over the theater.

For the most part, the aural landscape summoned is one of disjunction and internal warfare. Occasionally, especially in the scenes involving Ms. Pak’s Shadow, a sweet melodic serenity prevails. Not for long, though.

Harmony is an elusive goal in this show. So, unfortunately, is the clarity that would allow an audience to embrace it.

When you purchase a ticket for an independently reviewed play or musical through our site, we earn an affiliate commission.

Ben Brantley has been the co-chief theater critic since 1996, filing reviews regularly from London as well as New York. Before joining The Times in 1993, he was a staff writer for the New Yorker and Vanity Fair.